Bonge and Faine pull their finger out. Franophiles around the country were cheering this morning as ABC Radio National Breakfast’s Fran Kelly returned to the airwaves following a, shall we say, idiosyncratic stint from John Doyle over summer. The Roy & HG star polarised listeners with his piss-taking tone and presentational tics (including giving weather updates in Fahrenheit and quizzing finance reporters on their favourite films).

Listeners hanging out for Kelly’s regular federal politics slot with Michelle Grattan were surprised to discover The Age veteran will be sharing the slot with Channel Ten’s Paul Bongiorno this year. In an exchange sure to have turned some listeners off their morning muesli, Kelly and “Bonge” discussed Tim Mathieson’s overnight prostate exam gaffe — in which the first bloke advised the Prime Minister’s XI cricket team to get a prostate check with “a small Asian female doctor”.

“As a man of your age Paul would know,” Kelly told her new sparring partner, “digital prostate examinations are the best way to go.” Bongiorno fired back: “I’ve got to say that some doctors are much better at it than others. But whether it comes down to male, female, Asian or Caucasian I refuse to go there.” A wise decision indeed.

Meanwhile, ABC Melbourne presenter Jon Faine told listeners his doctor wouldn’t perform a prostate check on him because she said her fingers were too short. We fear this won’t be the last we hear from oversharing middle-aged male media types over coming days. — Matthew Knott

Synoptic impression. An art-loving Crikey reader has sent us in this shot of the Channel Nine weather map:

They reckon it looks remarkably similar to the work of impressionist painter Vincent van Gogh:

Front page of the day. The Queensland floods are leading most local papers this morning. A big story, yes, but nothing compared to the tragedy in Brazil where more than 230 people died in a nightclub fire over the weekend. Here’s the national Correio Braziliense‘s front page. The headline is the Hail Mary prayer … 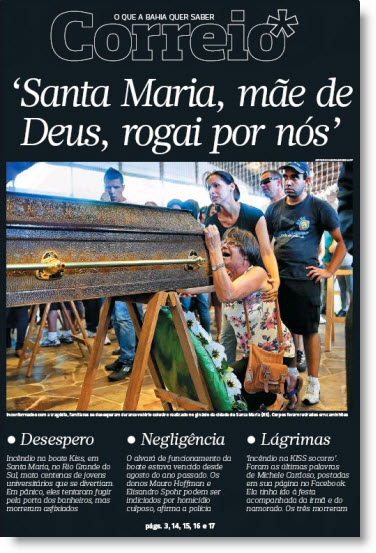 Yeah, Fran’s back, and that’s nice. But John Doyle was brilliant. He brought an exquisite, nuanced sensitivity to issues, successfully avoiding the conventional droll of tired political and social commentators. Waleed Ali is the best, but Doyle should not be patronised as a ‘not quite the full package’ as far as political journalism goes. He was refreshing, challenging, informative, stretched-to-the-boundaries commentary, and busted them. In other words, Doyle brought a very refreshing spin – close to the ordinary experience of us ordinary Ozzies – and got beyond the conventional protocols of press-gallery journalism. GO DOYLE!!!

Doyle doesn’t take himself as seriously and keeps news at a distance (preferably spitting?) he doesn’t roll in it. He knows his opinions are just that – and not “news”.