Defence women on the frontline since January 1 ... transport group to go into administration? ... readers of The Age love their guns ...

Women on the frontline … News that the US is to lift the ban on women serving in combat roles got Tips thinking about what happened to the promises that Australian women could serve on the frontline. We put it to the Defence Department, who said currently serving female members have been entitled to pursue a career in a combat role from January 1 this year (“provided they meet all requirements”). Women can now be clearance divers, mine warfare and clearance diving officers, airfield defence guards, ground defence officers, infantry and armoured corps, some artillery roles, explosive ordnance disposal squadrons and combat engineer squadrons (all roles that were previously restricted). Defence said it would begin to directly recruit women into these roles in a few years time.

Calling all Russell moles — have women taken advantage of the lifting of these restrictions on January 1? Are any women now serving in combat roles? Tell us more here — and you can stay anonymous.

… as is George Brandis. Speaking of Defence, was deputy leader of the opposition in the Senate George Brandis right when he told ABC PM on Wednesday:

“The Labor Party has absolutely no credibility on defence. They have slashed $25 billion from the defence budget.”

Sounds like there won’t be enough cash left in Defence coffers to buy so much as a slouch hat. But we thought Labor’s cuts to the military’s budget were more like $5.5 billion over the forward estimates. Perhaps Trish Crossin’s greatest defender is getting creative here?

Even the US arms industry’s devoted friend, The Australian’s Greg Sheridan, could only reach $17 billion in his attack on the government’s defence spending.

Another one bites the dust? There was talk on 3AW this morning that a major transport group was about to be put into administration, with possibly hundreds of workers to be affected. Apparently some truck drivers were told not to both going to work today. One to watch … there was also some radio gossip that a major news company is moving all its imaging (photos, advertising etc) to the Philippines.

Real estate Media Watch probe. Media Watch makes it very long-awaited return next month, and it seems real estate is on the menu. We hear property journos are being contacted by the program regarding “media coverage of real estate issues”. Stay tuned.

The Age readers love their guns. Really? The Age informed us this week that semi-automatic weapons are being made in Melbourne — and it seems those leftie latte-sipping readers think that’s just fine. Almost 18,000 people voted in paper’s online poll (more than usual), and here’s what it found (in stark contrast to most of The Age’s online polls, where the public slavishly follows the opinion they were encouraged to take in the article). So, is someone gaming the results? If you know anything, keep us posted. There’s a cheeky guide to how to game online polls here.

Re-signed to stuff-ups. Tips has been bringing you some of the country’s interesting road signs (no, really) of late — drivers on the way to Cairns might struggle to follow this one (apparently it’s since been fixed): 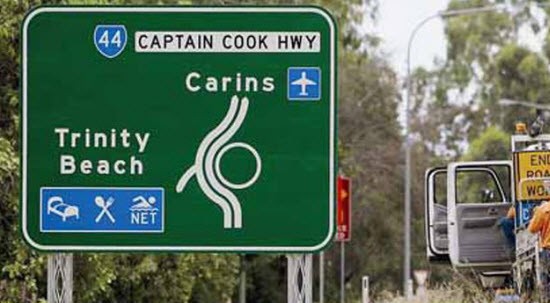 A tipster also told us that “some years ago there were signs on the Bathurst Orange Road announcing ‘Aerial Police Patrols’ underneath was written ‘Pigs in Space’.” We also hear that the NSW police air wing HQ at Mascot used to proudly display a large “Pigs In Space” poster.

Defence stuffs up, One Nation misfires at ABC

pssst …. George Brandis is a lawyer?

Re: Age readers love their guns.

Simple, first hand. Until recently I was involved with Aus shooters association.

If you could check the IP addresses of most of the Yes votes you would see they are members of the SSAA (Sporting Shooters’ Association of Australia).

They are quite vocal about gun issues, and when anyone sees an online poll on guns, they group email every member, encouraging them to vote, and include the link to make it easy for them. Their aim is to throw every Poll that is anti-gun, no matter what it is.

When it comes to stuff-ups in road signs, the daddy of them all can be found at http://news.bbc.co.uk/2/hi/uk_news/wales/7702913.stm
Enjoy