Sunday Mail ed’s brutal sacking. The editor of Adelaide’s The Sunday Mail, Megan Lloyd, has been removed from the job by News Limited’s Sydney bosses after 25 years with the company. Crikey understands Lloyd was given the heave-ho on Wednesday night and was not offered another position in the company – a development that has […]

Sunday Mail ed’s brutal sacking. The editor of Adelaide’s The Sunday Mail, Megan Lloyd, has been removed from the job by News Limited’s Sydney bosses after 25 years with the company.

Crikey understands Lloyd was given the heave-ho on Wednesday night and was not offered another position in the company – a development that has left News Limited’s South Australian staffers stunned.

Lloyd, the current president of the SA Press Club, started at News Limited as a cadet in 1987 and served as editor-in-chief of Messenger Newspapers from 2004 to 2009. She took over the editorship of The Sunday Mail (sister paper to the Adelaide Advertiser) in late 2008 when her predecessor Phil Gardner was appointed editor-in-chief of the Herald Sun.

Neither Lloyd nor News Limited’s SA editorial director Melvin Mansell were available for comment this morning. News Ltd is yet to announce a replacement. — Matthew Knott

Discredited report? Not for print. You know how the media, and especially The Australian Financial Review and The Australian, work. Imagine the government had been shown to have been relying on a dodgy, biased, private-sector report to justify a major policy decision. Not its own research, not independent work, but propaganda slapped together by an interested party. Well, a major scandal would have erupted, and the relevant opposition spokesperson would have decried it as further evidence of Labor’s incompetence.

But oddly, that’s exactly what’s happened — and yet rather than excoriate the government, its usual critics have simply repeated the government’s claims verbatim. Yesterday the government cited a report from Norton about the extent of cybercrime in Australia as a reason for its new focus on cybersecurity. The Prime Minister’s office tweeted: “5.4 million Australians fell victim to cyber crime in 2012 which cost the economy $1.6bn.”

The source for that claim is a report by Norton, a manufacturer of cybersecurity products, based on interviews with 500 people. Crikey discredited that Norton report last year. With Essential Research, we did our own independent polling on the incidence and cost of cybercrime, based on a sample of around 1000 people, which showed the Norton report wildly overstated both the extent of cybercrime and its cost. Nor is this the first time Crikey has busted ministers stretching the truth on cybercrime.

But The AFR today repeated the government’s numbers as if they were Holy Writ. Indeed, its entire reporting of cybersecurity issue has been one of uncritical acceptance of the views of government. Strange for an outlet normally so quick to attack and question a Labor government. — Bernard Keane

The $20t oil find that wasn’t. Yesterday, there was this … 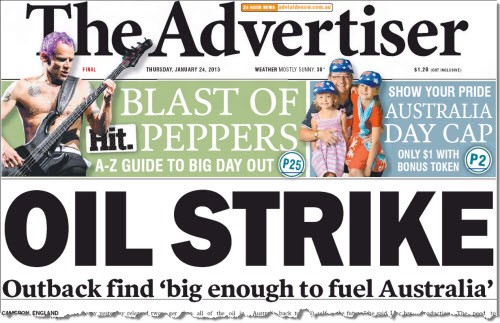 Today, there was this …

The Advertiser splashed with its scoop — $20 trillion (yes, trillion) worth of oil in South Australia’s Arckaringa Basin. Linc Energy, which owns the reserves, raked in the cash from investors as shares rocketed more than 30% higher on the news. Except, as Paddy Manning reported for The Sydney Morning Herald online yesterday:

“Media outlets including the Adelaide Advertiser appear to have multiplied the resource estimate by the prevailing oil price — above $US95 a barrel — to arrive at the $20 trillion figure.”

Oops. The company says it wasn’t responsible for the wildly incorrect estimate. But perhaps regulators might probe who was given the market manipulation. Meanwhile, News Limited tabloids including The Daily Telegraph and the Herald Sun also picked up the story — The Courier Mail wisely decided to edit out the inflated estimate.

Bumper watch. Last year we reported on the Christmas bumpers being put out by papers to try and give their journos a holiday. It seems serial offender The Australian Financial Review has gone back to the well again, putting out an “Australia Day Bumper” on newsstands today. It’s packed with all the latest features and profiles to get you through until the next edition on Tuesday. 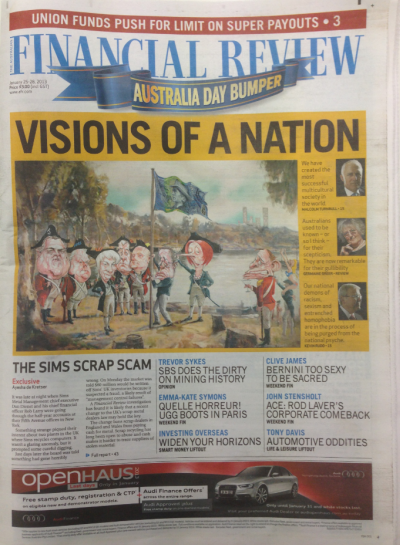 Meanwhile, inside the paper there’s a little note for those unlucky souls returning to work for the first time since before Christmas. Poor them! 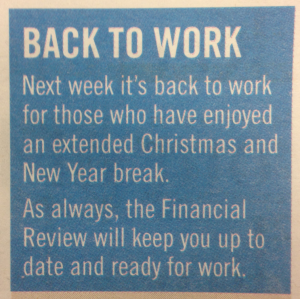 How patronising. We were flabbergasted by the efforts of Imre Salusinszky in today’s Australian covering the Independent Commission Against Corruption in NSW. In a strange colour piece about witness Noel Taylor, Salusinszky told of how “a labourer from Kandos (population 1306)” came to the “big smoke” and “managed to hold his own”.

Salusinszky even managed to sneak a reference to his own paper into the piece, referring to Taylor being asked by ICAC commissioner David Ipp to read a story from The Weekend Australian.

“Wearing faded jeans and a check shirt, Mr Taylor placed his reading glasses on his nose and stared at the text. It was quite possibly his first contact with the national broadsheet.”

“Then it was time for a bunch of $6000-a-day silks to take on the diminutive, bearded farm-hand. It could have been billed as Latte v Lager.”

Deutsche and Packer a cosy pair. You’d think by now Fairfax Media would handle the touchy story of James Packer’s bid for a new Sydney casino and his stalking of Echo Entertainment (owner of the current casino licence) by the book when it came to disclosure. So what are we to make of a story on the Fairfax websites yesterday and in the papers today?

“Research from Deutsche Bank shows that Crown shares have outperformed Echo’s by 56 per cent over the past six months, making a scrip and debt-based takeover much more palatable for Crown.

“Deutsche Bank’s Mark Wilson said the financial metrics were more compelling, with the dilution of Crown’s earnings per share now 7 per cent compared to 14 per cent under previous calculations and ‘the dilution of James Packer’s shareholding would now be within acceptable tolerance levels’.

“Deutsche based its calculations on a Crown bid split equally between debt and equity funding and at a 20 per cent premium to the current Echo share price which is trading around the $3.50 mark.”

Deutsche Bank is so close to Packer and Crown that anything it writes favouring the mogul and his play for Echo has to be classed as self-interested tosh. Deutsche constructed the original financing structure for Packer’s tilt at Echo last year. You’d think people writing about Echo, Crown and Deutsche Bank would point out the German-owned investment bank is not impartial. — Glenn Dyer

Headline of the day. We missed this in yesterday’s Townsville Bulletin. We apologise. 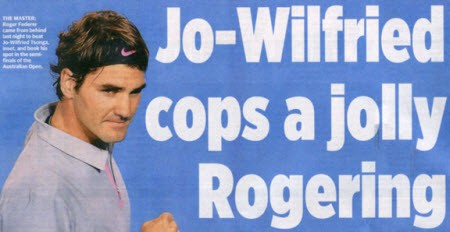 Front page of the day. Wow. 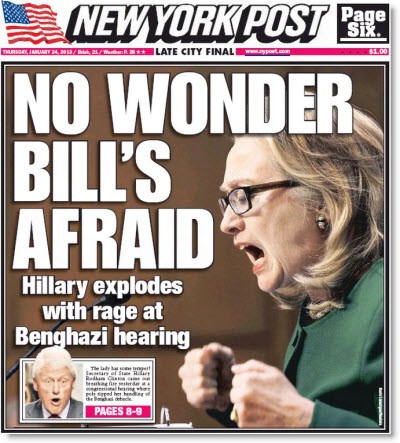 Hmmm. ‘Incorrect’ isn’t really the right word to use about the media-calculated oil resource valuation, wildly or otherwise. It’s extremely unreliable, even very unlikely, but not impossible. This is a classic case of absence of evidence not equalling evidence of absence. The SMH story makes this clear.

“Discredited report” – you’re not a member of that club of their’s are you?

How was Moylan reported – sans investigation, hook line and sinker by some….

[speaking of which, when he did that damage to shares how was he treated? When that “Oil strike” broke in the ‘Tiser, did that do anything for shares?]

Oh God! Only in Queensland…….