The call for a boycott of Sri Lanka's cricket team following the actions of the Sri Lankan military against the country's Tamil population is growing. But it's not just a cricket issue ... 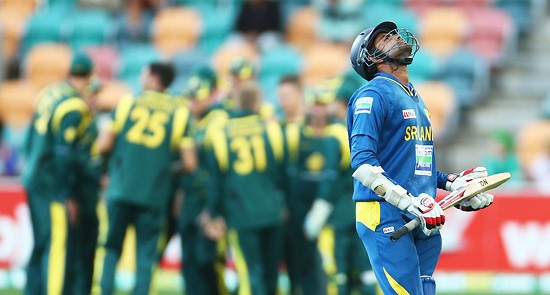 The government of Sri Lanka has been embarrassed over its human rights record by a call for a boycott campaign being run by respected Australian sports writer Trevor Grant. Grant has been using the Sri Lanka cricket team’s current tour of Australia to highlight what the UN believes were war crimes committed in Sri Lanka in 2009 and a subsequent campaign of human rights abuse against the country’s Tamil minority.

The campaign is the first politically driven proposed boycott of sports in Australia since the anti-apartheid boycotts of South African sporting teams in the 1970s and ’80s.

While touring Australia, the Sri Lankan cricket team, self-proclaimed ambassadors for their country, have been touting a holiday resort on their country’s north-east coast. Grant says the military built-and-run resort is situated at the site where some 40,000 Tamil non-combatant men, women and children died at the hands of the Sri Lanka military.

A UN investigation into the massacre concluded the Sri Lanka government had been responsible for “a wide range of serious violations of international humanitarian law and international human rights law … some of which would amount to war crimes and crimes against humanity”. The panel was also critical of the Tamil Tigers on this score. But the responsible Tamil Tigers were all killed, many being extra-judicially killed after having surrendered.

The call for a boycott comes as there is growing pressure for the Australian government to follow the Canadian government’s decision to boycott the next Commonwealth Heads of Government Meeting in Sri Lanka’s capital, Colombo. “Australia has taken a stand on the failure of democracy in Zimbabwe and Fiji,” Grant said, “yet the situation in Sri Lanka is infinitely worse.”

To date, the Australian government has deepened relations with the Sri Lanka government, including sharing intelligence on Sri Lankan asylum seekers. The warming relationship has come despite evidence of war crimes and crimes against humanity, and Sri Lanka increasingly distancing itself from conventional democratic norms. The Bishop of Colombo, Dhiloraj Canagasabey, has just publicly lamented what he says is the death of Sri Lanka’s constitutional democracy.

This follows the sacking by the government of the country’s Supreme Court chief justice, Shirani Bandaranayake. The move was later rejected by a full bench of the Supreme Court, but has been maintained. There are also increasing restrictions on Sri Lanka’s media. Journalists for Democracy in Sri Lanka, which is run by journalists who have fled the country, has documented the murder or disappearance of 39 media workers since 2004.

While Grant is concerned about what he describes as Sri Lanka’s slide into militarised authoritarianism, he says the new resort development at a site where “survivors waded through the neck-high water, passing floating corpses and dodging bullets” perfectly illustrated the reasons for the call for the sporting boycott.

“On the other side of the lagoon from the hotel being touted by Sri Lanka’s cricketers lies a sandy spit of land, which is considered Sri Lanka’s killing fields,” Grant said. He says that visitors to the resort are being offered guided tours of the site of the mass slaughter.

However, with the UN Secretary-General, Ban Ki Moon, recently appointing a new panel of inquiry following the UN’s failure to stop the 2009 Sri Lanka massacre, the issue looks set to dog the Sri Lanka government beyond the cricket pitch and into the halls of the forthcoming CHOGM.

Sri Lanka’s military showdown: is this it?

Yes, it may be time to call for restrictions on Sri Lanka’s participation in international events. The next cricket world cup will be hosted by Australia and Aotearoa New Zealand in 2015.

If every country that has had a government responsible for human rights violations was boycotted in the sporting sphere, there may be few international sporting contests remaining. It seems that in this case, the Sri Lankan government of the day, AND the Tamil Tigers themselves, were both deemed responsible for the tragedy in 2009. But not the people of Sri Lanka themselves, who have as much right as we do in Australia to watch their teams represent them in International sporting events. Perhaps the Sri Lankan President should deliver a Rudd-style apology to the victims’ families, and everything will be forgiven.
If war crimes were committed during the civil war we would hope that those responsible will be held to account. We would hope that in this post-war period the country as a whole will consolidate its democratic ideals. But perhaps it’s a little early to be calling for a sporting boycott.

Thank you for brnging attention to this issue, which the rest of the media seems bent on pretending doesn’t exist. The present government of Sri Lanka’s record on the democratic process is, if comparisons are needed, far worse than the Burmese government before its current (apparent) softening. And that’s not even before their war crimes are considered. And I’ll bet that no one can name the current head of their government, so well are their crimes ignored.

I’m surprised at the a-historical and one sided analysis of the conflict in Sri Lanka suddenly favoured in Australian media, presumably because one prominent journalist has taken a side, in the latter years of this difficult conflict.

England’s imperial habit of favouring workers from another country – in this case India – and their discriminatory treatment of races within a country – divide to rule – helped sow the seeds of racial conflict in Sri Lanka between Tamils and Sinhalese people – as this European imperial habit did and still does in many countries around the world.

It is blithe and somewhat patronising for members of the british commonwealth – in this case, Australian media – not to acknowledge this.

BLind support of tamil claims against Sinhalese claims would be like English speaking media suddenly deciding to boycott Catholic Ireland in support of the protestant north.

This is not to support recent violences by the Sri Lankan government. But the conflict began decades ago. . It’s worth noting that Tamil resistance movement and eventually its guerilla tactics were in part fostered by writers among a diaspora of Tamil intellectuals who moved to the UK in the 1960s.

Is history repeating in Australia?

Obviously most of the people that have written a response are thoughtful people who took the time to read a story about human rights, but not the UN report about potential genocide.

Please watch the 4 corners report which has vision of the Sri Lankan army shelling the makeshift hospitals once their co-ordinates had been supplied. The list is extensive and although there are significant issues with the Tamils the type of retaliation is never justified.

The Australian government response is typical of the Julia/Swan right wing government. This cosy relationship is necessary to STOP THE BOATS.

It is typical of what it means to STOP THE BOATS that people are left in appalling situations where they are under daily threat, but at least we are not responsible for that are we?