A profile on actress Megan Fox in Esquire magazine -- dubbed "the worst thing ever written" -- has inspired former FHM Australia editor Guy Mosel to reflect on the life of being a lads' mag writer. 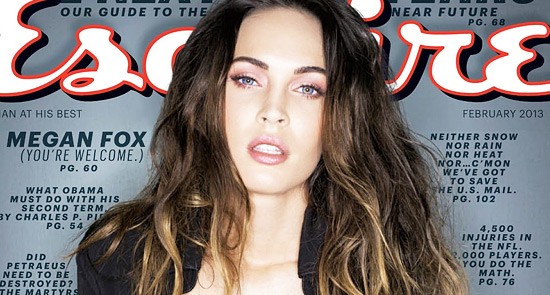 Esquire writer Stephen Marche wrote a cover story on Megan Fox for the February issue of the men’s magazine. And then everyone went nuts.

Clementine Ford in Daily Life described it as “a literary exercise in Marche waving his penis about”; Emma Gray from The Huffington Post said it was “the most simultaneously rage-inducing and confusing piece of celebrity journalism in recent history”. Others weren’t as complimentary: Vice dubbed it “the worst thing ever written”.

Marche’s piece wasn’t so much badly written as so cringeingly flowery and fawning it could be mistaken for parody. The piece begins by likening Fox’s celebrity “sacrifice” to a literal human sacrifice practised by the Aztecs. In the guts of the feature he indulges in some masturbatory reflections about Fox’s “perfectly symmetrical bombshell body”. Finally, Marche uses the name of her son — Noah — as a springboard for a final sentence which, one imagines, is meant to sound wise and portentous but merely comes off as a bizarre non sequitur: “In the ancient story of the flood, Noah and his family are the only ones who escape the general destruction of the corrupt world.”

Still, you certainly couldn’t accuse Marche of lacking flair. Indeed, sometimes flair is all a writer has when they’re required to write 2500 words about a subject who may not have given them 2500 words of material. In the world of men’s magazines, feature writers become remarkably adept at creating something from nothing. I once wrote a 600-word piece for FHM about a French model using nothing more than her name, the year and town in which she was born, and a couple of roughly translated quotes dug up from a modelling competition profile.

I devoted the first 200 words to blathering about what a great year 1985 was (ranking the birth of the Gallic beauty alongside the release of John Farnham’s You’re the Voice and the debut of Neighbours), and fleshed out the rest with some tripe about Gerard Depardieu and Brigitte Bardot. It was a waffling piece of nonsense. (So much so that I refused to put my byline to it. My editor at the time instead attributed the story to “Phil Anges”, a pun referencing the fact that I wrote the story from a bed in St Vincent’s Hospital, Darlinghurst, where I was being treated for a toe infection.)

But much of the criticism levelled at Marche has less to do with his melodramatic analogising than what many believed was an underlying sexism or, yes, even misogyny. Some used it as a jumping-off point to level criticism at female objectification in men’s magazines more generally. I’m not willing to get into a debate about that, but I will say there are good arguments in favour of the notion that putting a scantily clad woman on the cover of a men’s magazine is disrespectful to women. I will also say that the men who work on those magazines are, to varying degrees, aware of it.

“Most men’s magazine writers I know are not the lecherous women-haters of convenient mythology.”

Marche is a very accomplished writer. He pens the excellent Esquire column “A Thousand Words About Our Culture”, he’s written four books, the most recent an analysis of Shakespeare’s impact on world history, and contributes to the likes of The New York Times and The Atlantic. His subject areas range from politics, to literature, the power of social media, racism and pop culture. I’d be willing to bet that a Megan Fox feature is not the kind of journalistic exercise that makes him leap out of bed in the morning.

In fact, I’m almost certain the Fox feature was just a good pay day for Marche — and as a freelance writer myself, those are few and far between.

But did he have to devise some kind of self-justification in order to turn his pen to such celebrity guff? And was he worried what his mum might think about it?

Most men’s magazine writers I know are not the lecherous women-haters of convenient mythology. Sam de Brito once described my former brethren and I as “awkward blokes unsubtly exacting revenge on the cute girls from high school who would never talk to them”. He’s wrong (although not about the girls not talking to us — that’s true). If they could, most men’s magazine writers would never write another sexy woman profile story as long as they lived. As far as rewarding journalism goes, it falls somewhere between rewriting media releases and attending Clive Palmer press conferences.

Quite apart from the lexicographical knots in which you sometimes need to tie yourself to make the piece worth reading, you often suffer the ignominy of having your work critiqued and edited by the talent’s management (copy approval is a pretty standard condition for most A-listers), a process that invariably removes the most interesting bits.

Journalists don’t work at men’s magazines to challenge themselves to come up with inventive synonyms for “boobs” or to ask South African bikini models about their sex lives. They work at men’s magazines because they get to write in a smart, irreverent way about subjects that other print media don’t cover. Marche contributes to Esquire not because he’s hoping for the opportunity to ask a starlet about the significance of the tattoos on her inner thigh, but because he gets to write a brilliant monthly column that, really, could only exist in a magazine like Esquire. Writing sycophantic celebrity features is, in a sense, just the cost of doing business.

Men’s mag writers are usually progressive, self-aware, self-effacing-chaps who are, if anything, embarrassed by the fact that their job requires them to occasionally wax lyrical about the sexual attractiveness of a woman they’ve often never met. I spent six years telling myself that writing about women in that way was, at worst, tongue-in-cheek and playful, and at best a “celebration”.

I still believe that there is nothing inherently sexist about admiring a beautiful woman’s physical features — but at the same time there’s a reason I’ve not included any of those stories in my portfolio.

What are Australian freelancers paid? The complete data

I see the Nuremberg Defence is alive and well.

As gross and lowbrow as they are, FHM and co. have caused infinitely less damage to our society than Cosmopolitan Magazine.

Kerryn Goldsworthy, I salute you.
In a mere nine words, you’ve summed up my feeling precisely.

Boo hoo I just wanna pay my bills!
Misogyny is well and truly alive – if anyone used that excuse for writing racist pieces or pieces advocating violent Jihad it wouldn’t get them far.
But seems like casual sexism is fine if you need to pay your bills.
I agree with Monash.edu that Cosmo mag, etc. should be held to account for their tawdry efforts too.

Godwin in the very first comment, that’s got to be some sort of record.