Swiss silence from KRudd? ... Nova's hockey scandal ... this bush turkey is named after which politician? ...

Radio silence from KRudd. Has anyone noticed that the world’s busiest backbencher, Kevin Rudd, has gone silent since heading to Switzerland for the World Economic Forum? A Twit pointed out the lack of tweets from @KruddMP. The WEF is not so coy about their star Australian — you can see what he’s been up to here.

Rudd last tweeted on January 20 (he also tweeted once on January 19 and five times on January 18). But nothing from Switzerland. “You get the feeling he’s playing down the fact he’s in Davos for the World Economic Forum, apparently he’ll even be there on Australia Day. Not very patriotic for a once and future PM!” our Twit mused. Or perhaps Rudd is just busy saving the world economy, eating chocolate and playing the alpine horn.

Lame muckraking. If this is the worst they can do against Nova Peris, she should coast to a Senate seat. A sporting pal reckons she upset some in the NT when she decided to play hockey for South Australia in the national women’s hockey league:

“The territory had expected her to play for them for nothing. She was offered money by SA and so went there. The then-CLP government took a shot at her claiming she should have played for the Territory because of all the money they had given her. This money was made up of sporting scholarships which she surely earned with her talent and they even tried to claim the $5000 she won for being named Territory Sports Person of the Year was a government grant! The NT hockey community weren’t thrilled either.”

Our tipster reports that Peris is a divisive figure in NT sport partly because of the dastardly defection down south. In Tips’ view, outgoing Labor Senator Trish Crossin (who?) has had 15 years to make her mark in Parliament; is it such a crime the Julia Gillard thinks it’s time for a fresh face and wants to see an indigenous Labor parliamentarian at the federal level?

Sign of the times. Tips has been interested in adaptations and improvements on Australia’s road signage. This one was spotted just outside Ballarat last Sunday. Apparently some Commodore drivers like to tart up their cars and affix a Chevrolet badge over the Holden badge (they’re owned by the same company): 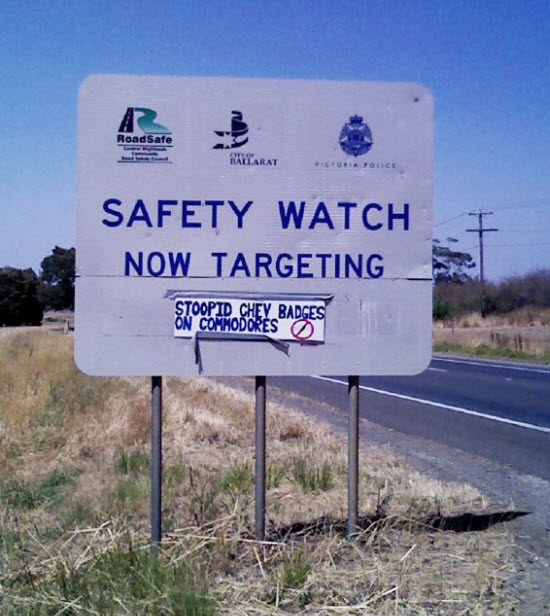 Pollies’ nicknames. Tips has been tracking down the nicknames enjoyed by our federal politicians (read our master list here), and we were delighted to receive this reader submission: a beast which has been nicknamed after a politician.

“We have a bush turkey which visits daily at our Whale Beach residence which goes by the moniker ‘Barnaby Joyce the bush turkey’. Watching the turkey’s behaviour, this is most apt. Whenever Barnaby is present he’s the cock of the walk, lording it over the assorted menagerie of a magpie family, water dragons, possums, and the newly arrived rabbits. Barnaby is demanding, and will peck loudly on the glass patio doors to announce his presence, and will enter the house given the chance, to scavenge the cat’s food. Trying to build a compost is impossible; each day he spreads its contents to four times its coverage, searching for the daily scraps.

In recent weeks he’s arrived with a new offspring, showing it the ropes. Clearly, it’s nepotism at play, something we’ve witnessed before in political ranks.”

In other nickname news, we’ve received a claim that Amanda Vandstone is sometimes dubbed Verandah Sandstone. But our nickname list is sadly lacking in nicknames for the Greens — can you oblige? Sadly we are yet to hear back from Malcolm Turnbull over claims his ex-Goldman Sachs colleagues sometimes called him Turdball.

I fail to understand how it is either a ‘tip’ or a ‘rumour’ that the Ruddster hasn’t Tweeted for several days. The puerile comment about it being unpatriotic not to be in Oz on Australia Day is also superfluous to needs.

Perhaps it’s time to scrap this Tip/Rumour segment – or, at the very least, not include it on days when there is nothing substantial to publish.

“is it such a crime the Julia Gillard thinks it’s time for a fresh face and wants to see an indigenous Labor parliamentarian at the federal level?”
Its not a crime, it simply amplifies Ms Gillard’s contempt for members of her own party. In my view if that’s how she treats her own party members, why would anyone want to vote for her.
In saying that, I’m keen to see what policies political candidates have. I can like or dislike a politician, but it will be policy I vote for at the 2013 federal election.