Mapping a reminiscent non-war in Africa

Trouble in Mali has US and UK forces on alert join a new front in the war on terror. But those rushing to chase al-Qaeda and offshoots in Africa should know the history and complexity. 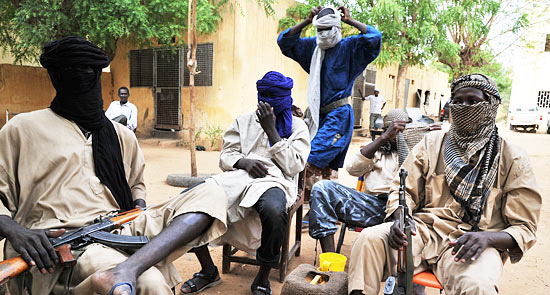 Maps can be deceiving. It’s long been obvious that the deep-seated Australian fear of “forces to the north” — red menace, yellow peril, boat people, etc — was partly because it appeared they would simply flow down to us, through sheer force of gravity. Now take a look at Mali. The place is shaped like an hourglass, one part in central north Africa, the other right in the middle of coastal west Africa.

With an al-Qaeda-style group driving a rebellion in the north, and moving south, and the French already putting boots on the ground to quell it, the illusion of up and down will prove irresistible. Al-Qaeda slowly dripping down through Africa. Ready to join up with Boko Haram in Nigeria? North Africa is being Islamised!

Cue David Cameron, all but echoing Dubya, claiming “terrorism” — by which he means violent Wahhabist/Salafist small-group war and terror — would last a generation. Indeed, the colonial attitude has been much on display throughout, with foreign secretary William Hague conceding the region was part of a “French sphere of influence”. Barack Obama made a place-holding non-committal remark to the effect that the French were handling it, which incurred a fresh round of “appeasement” chatter from the US Right.

Apart from that, many of the usual suspects have been quieter than usual on the matter of the Mali intervention, even though it is a whole new opening in the “long war”. For what remains of the neocons, the intervention has none of the crusading swagger of Iraq and Afghanistan, the idea that it was part of a grand, near-utopian project of modernisation and liberation. This is just a dirty little maintenance war, of the type the French have been running in northwest Africa for half a century.

But nor has there been a great deal of protest or attention from the other side. One suspects this is because the advance of AQIM (Al-Qaeda in the Islamic Maghreb), barely contested by the Malian army, has given many people pause for thought. The weakness of many north African states — indeed, their vestigial character in some cases — ostensibly makes them small match for a disciplined force with money behind it, as AQIM are.

Indeed, AQIM has been based in northern Mali, under various names, for around a decade. It was invited and fostered there by President Amadou Toumani Touré, who was in power from 2002 to last year, when he was ousted by a coup. Like all Malian leaders, Toure had been determined to resist any demands by the Tuareg people — who dominate the north — for regional autonomy or independence.

To that end, according to Al Jazeera‘s May Ying Welsh, Toure allowed AQIM (which was of Arab Algerian origin) to operate in northern Mali, as a countervailing power. They made money from drug trafficking and western hostage taking, from which Toure’s government took a cut, and they acted as a countervailing power to Tuareg groups. The Tuaregs meanwhile had been sustained by Muammar Gaddafi, who had given many of them a place in his army.

When Gaddafi was overthrown, many of the Tuaregs returned to Mali, taking weapons in lieu of the pay they were no longer getting. The Tuareg revolt, which has flared at several points since the early 1960s, burst into life again, headed by a secular group the NMLA (National Movement for the Liberation of Azawad), and an Islamist Tuareg group Ansar Dine. Their early gains prompted a coup against Toure, which then left the nation isolated from co-operation with other nations. As the revolt progressed Ansar Dine began to overwhelm the NMLA, and a new group MOJWA (Movement for Oneness and Jihad in West Africa), created by black African AQIM members, also became involved. Ansar Dine and MOJWA began to co-operate, and the result was the sudden Islamist turn in the uprising — made visible by the destruction of graves and mosques in Timbuktu.

The Islamist sweep has thus been a result of piggybacking on a more traditional national uprising by a people who have been locked out of power since Mali was created, and whose cause has legitimacy. Now that Islamist and Sharia law agendas have taken over, the movement is fast losing support among the people of northern Mali. The French appear to have a measure of support for a quick intervention, but that would most likely dissipate very quickly if they hang around for any length of time.

The neocons are, as ever, trying to turn this messy local event into a replay of 1938, Hitler, appeasement etc, with Obama cast in the role of Chamberlain. There has been much less comment from the other side, perhaps because the prospect of a spreading Islamist north African insurgency tends to concentrate the mind somewhat. So too does the prize in that part of the world, one that Gaddafi himself had earlier had an eye on — uranium, both in northern Mali and also neighbouring Niger. Currently this powers French reactors. They would be worried about a price hike or cut-off from a new regime and the prospect of an al-Qaedist regime with its own nuclear raw material.

In case there were any doubt that we were in for round two of something, Hillary Clinton dispelled it in her testimony to the Senate — ostensibly on the Benghazi embassy raid which killed the US ambassador — to say there was a war on. While the language was of supporting local states rather than boots on the ground — which no US government is likely to do — they were in it for the long run:

“This is going to be a very serious ongoing threat because if you look at the size of northern Mali, if you look at the topography, it’s not only desert, it’s caves. [This] sounds reminiscent. We are in for a struggle. We’ve got to have a better strategy.”

Reminiscent. Y’think? On the other side, there were those willing to characterise it as “blowback” from the Libyan uprising, and Western support given to it. That is true as a proximate cause, but all revolutions produce such side effects. Further back, it is Gaddafi himself who bears a fair share of the blame, for his own imperial interventions in north Africa — backing winners and losers, such as the Tuareg groups who returned with weapons and training, after he was gone.

On the US side, the pitch to a better strategy is of course to the boutique outsourced modular war of drones — hoping they can kill violent Islamist leaders (and family and friends) at a significantly faster rate than the attacks recruit new ones. No doubt, having avoided the entanglements of the Bush era, team Obama is all too smart to mess it up.

These are neat little non-wars, planned far away from the action, on neat little maps. And it can only go wrong if, well, if maps are deceiving.

Thanx very much for this, which I found most informative.

further information and funny if you like that sort of humour:

Of course Guy left out that nearly every country is on board with this intervention. Russia is helping. Nigeria is sending troops. The US govt is happy the French are taking the lead, which kinda messes up the neocon anti-France position from 2003. And instead highlights just how successful US foreign policy has been since 2008 in building multilateral responses.

Is Guy really the person to be writing about this issue given the neo-Marxist prism he sees nearly ever issue through. For Europe and France in particular – the issue involves refugees and the danger of spill over terrorist attacks into Europe itself. Uranium supplies are really a low priority issue given the very low global price for yellowcake.

Meanwhile, when it comes to Drones – the new evil of choice to rail against for the left – let’s ignore that prior to modern GPS guided missiles and bombs the usual tactic was to carpet bomb a town, city, country – with extremely high collateral damage levels.

Modern warfare – while expensive per unit of munition – has probably a 99% lower rate of collateral damage compared to what it was in WW2 for a similar sortie. Absolutely it sucks to be part of that 1% “collateral damage” – but put in context it’s a very different reality to what it was like 40-70 years ago.

Just for once, can Crikey leave the Brunswick/Marrickville mindset out of its reports on complex international issues and directly interview people who are across the issues rather than selectively cutting and pasting stories together with quotes and text from other media that only justify one’s own pre-judgments on an issue.

Damn you Guy. You’re expected to simplify these matters for the clueless like me.
Instead, you’ve mercilessly pointed out the devilish complexity of one small part of the African jigsaw.
Well done!