"Don't mention the war" is probably the most famous and best-loved episode of Fawlty Towers but political correctness is ensuring that viewers today are being spared some of the original language.

A passing mention for climate change. In Strong and Secure: A Strategy for Australia’s National Security, released yesterday, much attention was given to the need for a whole-of-government approach to cyber security, while the threat from climate change to future security received but the barest of mentions. The document dismissed climate change with these words:

“The more severe effects of climate change, in particular the increase in frequency and severity of natural disasters, compounded by competition over scarce natural resources, may contribute to instability and tension around the globe, especially in fragile states.”

This somewhat off-hand dismissal of the subject stands in contrast to the approach in the United States where a government commissioned report from the National Academies published this week outlines how climate change can reasonably be expected to increase the frequency and intensity of a variety of potentially disruptive environmental events–slowly at first, but then more quickly.

“It is prudent to expect to be surprised by the way in which these events may cascade, or have far-reaching effects. During the coming decade, certain climate-related events will produce consequences that exceed the capacity of the affected societies or global systems to manage; these may have global security implications. Although focused on events outside the United States, Climate and Social Stress: Implications for Security Analysis recommends a range of research and policy actions to create a whole-of-government approach to increasing understanding of complex and contingent connections between climate and security, and to inform choices about adapting to and reducing vulnerability to climate change.”

Among the US report’s recommendations are these:

“Conclusion 5.1: It is prudent to expect that over the course of a decade some climate events — including single events, conjunctions of events occurring simultaneously or in sequence in particular locations, and events affecting globally integrated systems that provide for human well-being — will produce consequences that exceed the capacity of the affected societies or global systems to manage and that have global security implications serious enough to compel international response. It is also prudent to expect that such consequences will become more common further in the future.

“Conclusion 5.2: The links between climate events and security outcomes are complex, contingent, and not understood nearly well enough to allow for prediction. However, the key linkages, as with societal disruptions, seem prominently to involve (a) exposures to potentially disruptive events directly or through globally integrated systems affecting human well-being and (b) vulnerabilities (i.e., susceptibility to harm and the effectiveness of coping, response, and recovery efforts). In addition, security outcomes depend on the reactions of social and political systems to actual or perceived inadequacies of response.

“Recommendation 6.2: The US government should begin immediately to develop a systematic and enduring whole-of-government strategy for monitoring threats connected to climate change. This strategy should be developed along with the development of priorities and support for research.”

Continuing the blame game. Melbourne’s Herald Sun has taken sides as the Victorian state government tries to blame the evil feds for the financial shortages leading to the closure of hospital beds. They are “Gillard’s health cuts”. 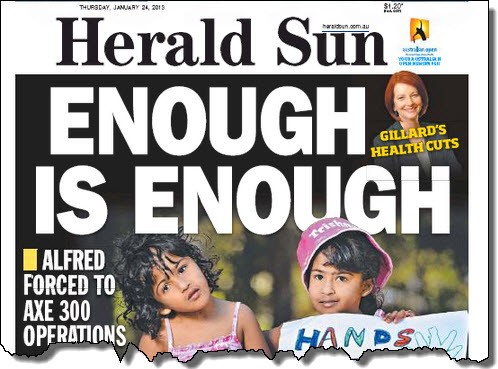 Presumably Tony Abbott will eventually work out how to capitalise on this issue. That he has not done so already, given the cutbacks in health spending throughout the country, continues to amaze me.

Editing out the Major. “Don’t mention the war” is probably the most famous and best-loved episode of Fawlty Towers but political correctness is ensuring that viewers today are being spared some of the original language. The BBC deleted, reports London’s Daily Mail, the following scene as it re-screened the 1975 classic at the weekend:

“Basil Fawlty and the major, played by actor Ballard Berkeley, exchanging their normal pleasantries before the conversation moves on to Basil’s wife Sybil and women in general.

The major tells Fawlty about the time he took a woman to see India play cricket at the Oval. He then says: ‘The strange thing was, throughout the morning she kept referring to the Indians as niggers. ‘No, no, no,’ I said, ‘the niggers are the West Indians. These people are wogs’.” 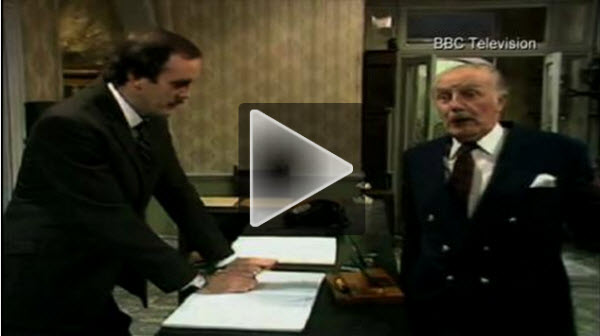 But is it really racist to show on television that racist people like the major actually exist? Vote please in our political snippets poll HERE. 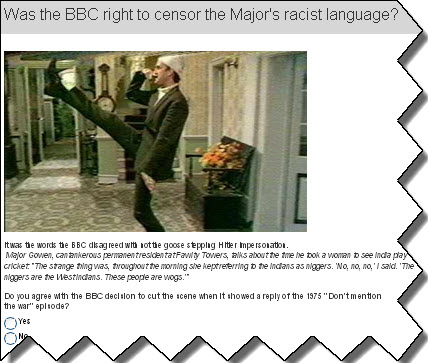 If the BBC edited out racism it would have hardly anything left of Alf Garnett or Ali G.

“The Herald-Sun” : “Victorian government (conservative)” vs “Gillard Labor” … armed only with opinion and a few PCPs …..?

Put your money on self-interest and moral incontinence, on the nose, every time?