Council sorry for sign ban. The mayor of a Sydney council which banned a support group for people of diverse genders and s-xualities from displaying their sign at an event last week has apologised.

Tips brought you the story on Monday. The group, Twenty10, left the family event after being told by a council worker they had to take down their sign from their stall down because it was “offensive”. In a statement issued just before Crikey goes to press today, Twenty10 said:

“Following the outpouring of community concern and online social media campaigns, Twenty10
incorporating GLCSNSW has finally received a letter from the Lord Mayor of Parramatta, John Chedid.
The letter issues an apology for the actions taken at the Rediscover the River event held by
Parramatta City Council last week, at which Twenty10 was asked to take down their signage.”

Twenty10’s acting Managing Director, Terence Humphreys added: “We are glad to accept the apology and to begin further discussions with the Lord Mayor, his office and the Parramatta City Council to prevent similar situations in future.”

Crikey had received an interesting follow-up tip about the case. Humphreys told us on Monday that the directive to take down the sign came from a council worker who said there had been complaints from the public. But someone connected to the case reckons the directive came from higher up; “for a spokesperson to attribute complaints to the public is nothing short of misleading. This culture of intolerance is being driven from the top,” they said. Anyone know more?

On the move. We hear Chaiy Donati, former president of Queensland Young Labor and AWU staffer who was a staunch supporter of conservative US Republican presidential candidate Ron Paul, has “returned home to NSW after burning all his bridges with Queensland Labor”. Our mole wonders if he can kickstart his political career in northern NSW. One to watch perhaps?

Turdball, indeed. An insider from the business world reckons Malcolm Turnbull was dubbed Turbo by his Goldman Sachs colleagues when being “powerful and dynamic”. When he was being “high-handed”, apparently the nickname switched to Turdball. We’ve put this to Turbo’s office for comment and have not heard back. That one should be interesting.

It’s all grist for the mill for Crikey’s list of politicians’ nicknames, which the public is kindly helping us add to. You informed us that Barnaby Joyce is sometimes called Shouting Mouth (we’ve never heard that used), Liberal MP Stuart Robert cops Merkin (read the reason on the list), while Belgian-born Liberal Senator Mathias Cormann has apparently given himself the nickname The Muscles from Brussels. We now need some more Labor nicknames; can you help us out?

Not so super. Sounds like there might be a few delays with the transfer of super fund AGEST to industry giant AustralianSuper, which happened on January 1. AGEST was the default scheme for government employees employed under a certain act, while AustralianSuper is a not-for-profit with 1.9 million members. Someone affected by the transfer is not too happy:

“Ex-AGEST members have been effectively locked out from their account information for the last three weeks. They have no access to balances or investment choices that were allocated to their funds when they were rolled into AustralianSuper. When phoning, new members are informed of ‘above average demand’ and to expect delays in responses. Members are informed that simple emails of statements are expected to take at least a week to organise.”

A sign of the times. Yesterday we brought you a striking digital road sign purportedly located outside a Queensland airport, via Reddit. A sign guerilla tells us it’s not hard to alter the official message:

“It’s fairly trivial to reprogram those if some bugger’s forgotten to lock the control box underneath it (and I can’t see a padlock). My experience in fiddling around with them is that someone will forget to lock up about one time in 10 and the PIN code will be helpfully scribbled inside the lid. This lets you override the programmed message with the zombie-related warning of your choice. It’ll usually be changed back as soon as someone notices, but I had one just off Parramatta Road that survived almost a week repeating the opening line of Ice Ice Baby instead of telling people about night roadworks.”

This seems like all the excuse we need to revisit that great 90s tune. But is the first line actually “Yo VIP, let’s kick it”, or the popularly-acclaimed “Alright stop, collaborate and listen, Ice is back with my brand new invention”? There’s only one way to settle it, and that’s for our rogue sign-tamperer to send in a pic. Any other “improved” signs more than welcome.

This is an oldie but a goodie; it circulated around Canberra when rugby league star Todd Carney had a few run-ins with the law over alleged driving incidents: 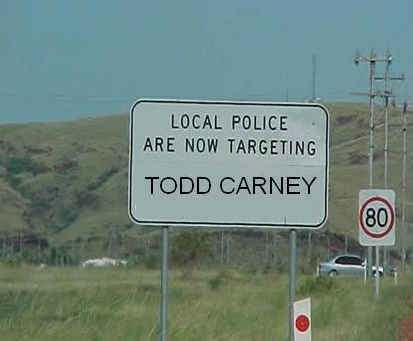 Vote now in the 2020 Crikey Awards

Should straight ever play gay? Critics come for James Corden over casting controversy

Could someone please tell me why AGEST suddenly became part of Australian Super? We have an allocated pension account which has been tranferred to AS, and I would like to know why that happened. Nobody at either institution has given us a satisfactory reason for the transfer. It is also becoming clear that the type of investments we chose in AGEST don’t seem to be available at AS. Not Good enough!