A slightly unorthodox chart this week, with Prime Minister Julia Gillard’s rating at half its usual level (still enough to see her on top) and our state politicians more prominent in the media than when federal parliament sits.

Case in point is Queensland Premier Campbell Newman, ousting Tony Abbott for second place thanks to headlines over health sector job cuts, social unrest in Logan and tropical Cyclone Oswald. He also attracted coverage thanks to our biggest mover this week, Kate Ellis who — as acting federal Employment Minister — blamed Queensland for the rise in national unemployment figures.

Further south, a cabinet reshuffle saw South Australia Premier Jay Weatherill make news by assuming the additional role of Treasurer, the first to attempt it since John Bannon’s dual tenure ended with the State Bank collapse. It’s a high-risk tactic that suggests Weatherill’s front bench is bare. Over in the west, meanwhile, Western Australian Premier Colin Barnett continues his rise up our charts, campaigning his way toward a probable landslide in the March state election.

Also notching up the mentions this week is Green Senator Sarah Hanson-Young who will visit Manus Island next week to inspect the asylum seeker detention facility there. Her trip comes as Papua New Guinea’s Opposition Leader filed a challenge to the Australian-run detention centre, believing it to be unconstitutional. 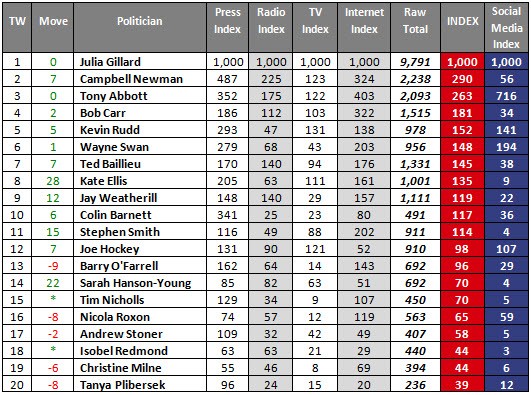 A police investigation into the leaking of that expletive-laden Kevin Rudd video keeps him in the Twittisphere.

Rarely does our weekly comparison chart higher than the Australian PM, but Lance nearly doubled Gillard’s coverage figures, such was the media attention given to his Oprah confessional.

All in the family: there really are loads of Australian political dynasties