The market is up 15. SFE futures were up 11 this morning. US market up 62. The Dow closed on its high of the day and was down 27 at worst on weaker than expected economic numbers and Info Tech company 4Q earnings. US YonY existing home sales were down 1% to a 4.94 million in December […] 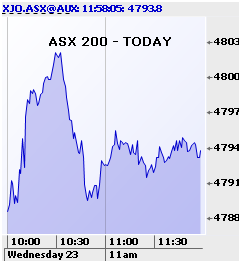 The market is up 15. SFE futures were up 11 this morning.

The CPI Number today was below expectations (good) with the headline at +0.2% for the December Q after a 1.4% jump in the September Q. Annual inflation at 2.2% which is well within the RBA’s 2-3% band and below the consensus forecast of 2.5%. Underlying it was up 0.55% for an annual rate of 2.3%. This was below the 0.7% expected. This raises the prospect of a rate cut at the RBA Meeting on February 5 and the market rallied a bit on the announcement and the A$ has fallen (on the prospect of lower interest rates).