Facebook's new search engine attempts to build walls around the internet and keep its horde within its gates. It's a nightmare and it will probably work. Crikey's website editor puts it to the test. 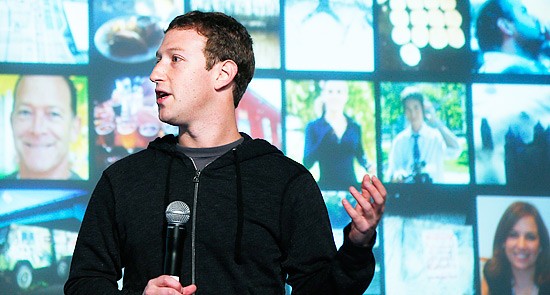 There are “very powerful forces that have lined up against the open internet on all sides and around the world”, the billionaire computer scientist said, citing “walled gardens” (cough, splutter, Facebook) as major threats to the values on which the internet was founded. He honed in on Zuckerberg’s social network:

“You have to play by their rules, which are really restrictive … the reason that we were able to develop a search engine is, the web was so open.”

The question has never been whether Facebook wanted to become the dominant force in controlling the online experience — but how it would go about achieving it. There’s been talk of Facebook web browsers and phones but in an age of cross-platform and mobile/app-based access they’re becoming steadily less relevant; new ways to communicate will change smartphones as we know them. But the need to search the internet? That’s here for good.

Graph Search, an extension of Facebook’s Open Graph, was announced to the tune of fawning headlines, from “Facebook’s Graph Search Could Be Its Greatest Innovation” to more dramatic turns of phrase like “Facebook Just Declared War on Google: Meet Your New Search Engine“.

Google, the world’s most popular search engine, was built by code junkies monetising the quickest and most efficient ways to deliver relevant search content under the assumption users will reward the service by returning. The result is the ultimate “bounce” site: visit, click, leave, return.

Then there’s Facebook, the former online pick-up joint for randy college students turned internet superpower. Its key advantage is not that it’s the world’s most popular website — though that doesn’t hurt — but the amount of time users spend on it, a metric Facebook has long dominated.

You don’t have to be a fly on the wall at Facebook HQ — where a new sign touting Graph Search has replaced its ubiquitous “like” logo — to hear the boardroom rhetoric: users will never have to leave. Experiments in streaming videos, text and video chat, Facebook email and even reading the news have long hinted at what was coming.

It’s primitive, but Graph Search is a glimpse into the future of search engines: the capacity to sort results from information submitted by people users know and trust rather than invisible algorithms cooked up by Silicon Valley nerds. The browser of the future is not a browser at all — it’s a social network tailoring the web for individuals.

I’ve been test driving Graph Search since last Saturday, accepted as a beta tester (anyone can apply) in the weeks/months before it will become de rigeur for hundreds of millions of users. Like any new system of searching or browsing — from the early days of Geocities’ branch-like community structure to Yahoo categories, Google keywords and Twitter hashtags — Graph Search will be of limited value until its syntax becomes second nature. We know that entering a noun prefaced with “what is” is a fast way to find relevant information on Google; the same approach won’t work as well on Graph Search.

Graph Search asks users to enter “simple phrases” in order to return “personalised results [that] show details just for you”. It plays to Facebook’s strengths: people, places, pictures and recreations.

The formula will be the subject of SEO detective work for some time, but searching a simple phrase like “Chinese restaurants” offers obvious indicators. Geographic proximity, “check-ins” (people who have logged in remotely with mobile devices), photographs and “likes” from friends are weighed against each other, the latter appearing to be the most influential variable.

Small businesses will be scrambling to secure a Facebook page to ensure their place in search results, if they haven’t already. And an army of SEO consultants will be offering tricks of the trade for climbing higher on results pages.

Market analysts will pore over Graph Search to find what products and services appeal to certain demographics. For example, if Crikey‘s subscription department run a Facebook campaign offering a free DVD with membership, Graph Search can reveal what brands users prefer. Take a choice between Breaking Bad and Boardwalk Empire. If I search for “people who like crikey.com.au and who like Breaking Bad” the engine returns more than 1000 results/people; the same search for Boardwalk Empire returns more than 100. Crikey‘s readership — at least those on Facebook — prefer their crime dramas to revolve around meth-cooking suburbanites than prohibition-era gangsters.

There are more than 40 ways to refine the search. For example:

Most effective are strings such as “what music does <insert name> listen to” and “photos of <insert person> from <insert year>” — that is, searches related to a person, a place, a recreation, a form of content and a time period. According to Graph Search, employees of The Age like to listen to Pearl Jam, Michael Jackson and Kings of Leon. Employees of The Australian like Radiohead, Bob Dylan and The Blazing Zoos.

“What is” style search strings, par for the course on Google, aren’t as effective. When I searched for “what is a duck” four responses appeared: “People who work at Duck Tape”, “People Who Like Duck Tales”, “People Who Like Donald Duck” and “My Friends Who Work at Duck Tape”. But below those responses, “web search” appears next to a grey icon of a magnifying glass and a globe. That took me to a search page (still within Facebook) with results on the left and related pages on the right: 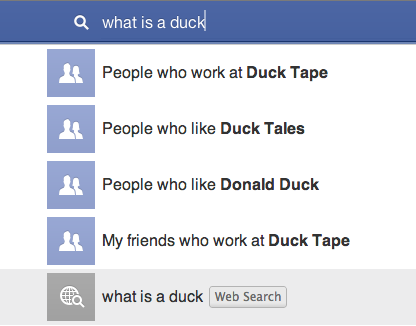 This component of Graph Search is powered by Bing, Microsoft’s three-year-old search engine. It’s a big coup for Microsoft and could force a change in the Google-centric approach the search engine optimisation industry has taken for years.

Importantly, to maintain Facebook’s position as the world’s most effective data mining operation, Graph Search will improve the more information is fed into it and when behavioural patterns change to accommodate for it. If users know restaurant reviews are given valuable real estate they are more likely to take a photo of their lemon chicken or Pad Thai and share what they thought of it.

Presently, external sites collated by Graph Search/Bing load other browser tabs when clicked. Bet the house that Facebook will introduce something — a blue-coloured strip running across the top of the screen, perhaps — that will keep all sites boxed within its walls. Wherever you go, Facebook will be with you.

Just as certain as the uproar is the fact users will get used to it, then come to expect it. Just like Sergey said.

India is building its own internet, with or without US tech

Brin complains of Facrbook users having to “play by their rules”. But try to do a Google search while using an anonymous proxy: a stern refusal will be the result. You must make yourself known, and they will track your activity and use the information for any purpose they choose. Whose rules are they? Certainly not users’.

And yet even when using Google to search, the internet feels far smaller and more controlled than it once did, i.e. more personalised. Both Google and Facebook collect user information so as to ostensibly create a better service, but this service seems both more streamlined and less interesting.

I’m thinking of completely switching to Duckduckgo now. For me at least, Duckduckgo is turning up slightly more relevant results and all without them knowing a thing about me.

I find all of this to be quite tedious. It’s as if Facebook is forcing it to use their system or something. It’s a public, publishing platform: if you’re worried about privacy, then you probably shouldn’t walk out into the middle of the street yelling out your name.

Google is hardly the epitome of an open, unfettered internet. In the realm of search the only option I know of that offers this is Duckduckgo.com, which doesn’t profile and users and consequently doesn’t personalise searches.

I find it superior to Google’s offering.