A funny ad promoting Dick Smith Foods has been rejected for early-evening broadcast by the Advertising Standards Board. The entrepreneur says he'll fight the attempt at censorship.

Entrepreneur Dick Smith is fuming an ad for his all-Aussie food company that plays on his famous moniker has been rejected by the TV ratings agency for prime-time broadcast. And he’s told Crikey he’ll go to the High Court to fight the attempt at “censorship”.

The ad posted to video hosting sites — produced by TV comedian Dan Ilic for $10,000 — features a cast of characters from farmers to boat people exclaiming their love of “Dick”. One nanna states: “There’s only one Dick I’ll be eating on Australia Day.”

Smith booked $100,000 in air time from the TV networks to broadcast the ad during 6pm news bulletins on Australia Day. But FreeTV’s Commercials Advice agency, or CAD, gave the one-minute spot a PG rating — not the G rating needed for early-evening programming.

“Apparently you can’t have lovely old ladies saying ‘dick’,” Smith said this morning after hearing of the decision, fresh from a business trip to China.

Smith says he’s talking to lawyers about what can be done. He’s not prepared to censor the “completely harmless” ad or air it later in the evening.

“I’m angry. I don’t like things being censored when it’s just good fun,” he said. Of CAD he said: “I think there’s something wrong with them.”

Smith, fed up with the mileage Sam Kekovich was getting for his dinky di ads promoting lamb, approached TV guru Andrew Denton to have the Chaser crew make a similar ad. Denton connected Smith with Ilic, who has worked on the Denton-produced Can Of Worms and Hungry Beast.

Ilic wrote on his blog yesterday:

“I got a call from Dick Smith out of the blue just before Christmas. ‘Dan, I got your number from Andrew Denton, I want to make an ad.’ Why not? He’s an Australian legend. Sounds like fun.

“So I wrote the funniest script I thought I could muster on our tiny $10k budget. Then convinced Dick that it’d be fine to run with the innuendo and the boat people joke. (Which is my favourite considering Dick’s stance on population control.)

“So we shot it in two day (sic), and after another four days in post … and thought it was pretty funny. There was one group that didn’t think it was funny. The CAD approval people.”

Ilic says Smith was “furious, incredibly upset”. He posted a barrage of texts he received from the former Australian of the Year: 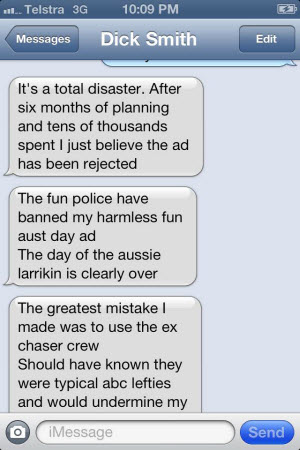 But Smith told Crikey it’s not Ilic but the people who decided the rating for the ad he wants to fight.

It’s the latest in a series of stunts Smith has pulled to promote his branded grocery products against the foreign-owned food giants. The non-profit enterprise donates profits to charity.

I do think that the Advertising Standards Board gets it wrong on other advertisements loaded with sexual innuendo that do get an early-evening broadcast…but, irrespective, of their inconsistencies, they may have got it right here!

If the intent was to capture a wide audience, then Dick Smith should have thought twice about hiring Ilic. Ilic is limited by a style tailored for comedy and late night adult viewing. He should have perhaps declined Smith’s offer.

A word of advice to Dick Smith—don’t waste your time going to the High Court mate—invest another $10,0000 in an advertisement tailored for early-evening viewing…(you really can’t tinker with the current advertisement because it is loaded with sexual and political innuendo). You would be smarter if you use this strategy—one further suggestion—you can hire me to make that ad for you!

Dear Crikey. The video appears to be ‘private’.

Also does this mean I would never be allowed to have my own brand of foods, given my similar name to Mr Smith?

Seranatopia, I take it that you wouldn’t personally object to seeing the ad at 6pm – you just wouldn’t want to be sitting with your mother or perhaps your grandchild at the time? Is saying the word ‘Dick’ during an ad on commercial free to air TV really such a big deal?