Which pollie is known as "Wottha" to his ALP colleagues? ... rumbles as Swan poaches AFR journo ... three's a crowd on this airline's Valentine's special ...

Nicknames. So, which Labor frontbencher has earned the moniker “Wottha” from some within his own party, in reference to “what’s he saying this time?” An ALP insider reckons that’s what some up on The Hill call our esteemed Foreign Minister Bob Carr. Meanwhile, a little birdie from the press gallery tells us that Belgian-born, Flemish-speaking Liberal Senator Mathias Cormann is called “The Cormmantator” due to a certain little something in his voice which can sound like Arnold Schwarzenegger (plus the fact he loves to comment).

Tips is compiling a list of pollies’ nicknames and it’s coming along nicely (Andrew Robb’s “Mr Bojangles” remains our favourite). We need your help — add to the list by contacting us here (and yes, you can stay anonymous if dobbing in your boss). One thing we’ve noticed is that Julia Gillard seems to be light on for nicknames, apart from the hate-filled bile from right-wing loonies on the net, and we’re leaving that off our list. What’s JG known as inside the beltway?

Swan song. The Australian Financial Review journo Pip Freebairn is jumping ship to Wayne Swan’s media office, replacing Swannie stalwart Matt Coghlan. A well-placed mole reckons “some of her colleagues at The Fin and in the press gallery aren’t too thrilled about the move”. Do tell us more. The Swan office has long been the preserve of boyish fellows who work like slaves (eg. Adam Collins) — it will be interesting to see how having a woman in the job affects the culture.

Our new iron man. A tipster claims the record of new Rio chief Sam Walsh in iron ore is underwhelming. Has our tipster done the maths right?

“Sam Walsh has been in charge of Rio Tinto iron ore for eight years (starting 2004), and between 2003 and 2011 Rio’s Pilbara operations productivity has fallen from 21,300 tonnes per person per year to 16,400 tonnes per person per year. If we included the remote operations people in Perth the numbers would be even worse. Source — Rio production reports combined with WA Government mineral and petroleum statistical digests that list employment by mineral and site. He can’t blame unions — except for a recent union agreement covering a few hundred train crew, the Rio Pilbara operations have been non-union since the early 1990s.”

Re-joycing. Tips has been rapped over the knuckles for poking fun yesterday at a Sydney Harbour cruise with Barnaby Joyce at a cost of a mere $1000. “Don’t look to either Truss or Joyce to offer much of a guided tour of the Harbour, given both are from regional Queensland,” Tips jibed. A reader (and Joyce fan — who knew we catered to such a demographic) pulled us up: “I think you’re being a little unfair here. Barnaby attended boarding school in Sydney and has family there and it is a city with which is he quite familiar.” We take it all back but reserve our right not to pay $1000 to cruise with Barnaby.

Beautiful one day, perfect the next. There’s a lot of talk on Reddit about this sign, purportedly located “out the front of the local airport in Queensland Australia”. Any sightings of the sign (there’s a claim it was in Bundaberg), or is it computer generated? It’s a nice Australia Day welcome to Reddit readers, at any rate. Certainly it would seem the town has no room for people who can spell … 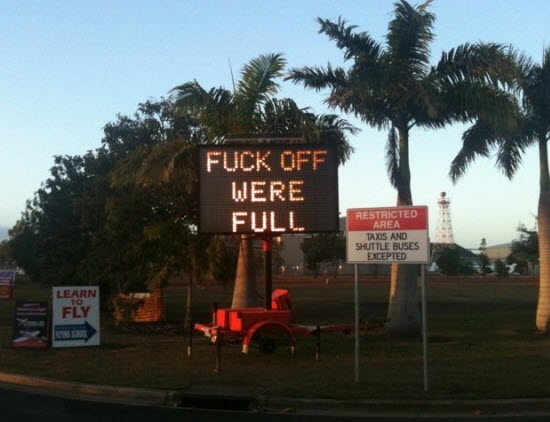 Romantic fail. A true romantic received this offer from Qatar Airways and was not convinced it was a great way to celebrate Valentine’s Day; taking that special someone on a lovely trip, and inviting a friend to go along with you too. “Would have thought that three would be a crowd, ‘Happy Valentine’s Day sweetie, hope you don’t mind if a mate comes along — he flies free’,” our tipster mused. 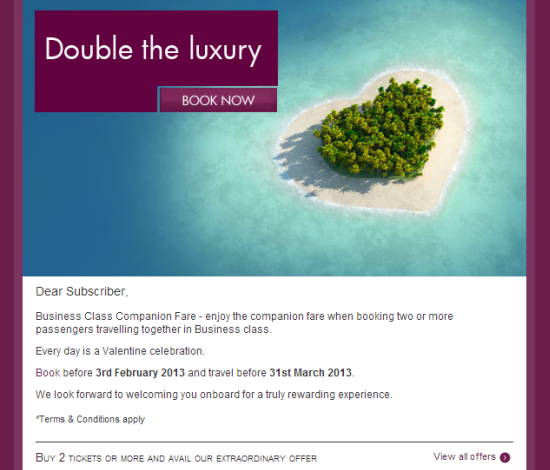