David Koch has caused a stir by telling mums they need to be "discreet" when breastfeeding publicly. How old fashioned.

The day Gough left the table. It is one of my enduring memories of Gough Whitlam — the night back in the ’70s he left the table at my wife’s restaurant during his birthday celebrations because the president of the Canberra breastfed babies association began feeding one of her progeny. The then Prime Minister bolted into the front garden along with Margaret and a goodly number of his guests. I am pleased to remember that Graham Freudenberg, the long time housemate of me and my wife and acting that night as a waiter, remained at his post inside quite unflustered.

Behind the times. And Australians pride ourselves on being early adapters when it comes to new technology. Yet not, it would seem, our judges. Most courts have not yet grasped that new fangled thing called television while in Britain their Supreme Court is about to enter the social media age.

Videos of the Supreme Court justices as they give judgments will be uploaded on YouTube shortly after they are delivered in court. The videos, reports The Times, featuring the likes of Lord Neuberger of Abbotsbury and Baroness Hale of Richmond, will bring the country’s most important legal rulings to a much wider audience and show the highest court in action.

‘One Today,’ An Inaugural Poem. Richard Blanco became the fifth poet to read at the inauguration of a United States president. Blanco, the first Latino, openly gay and youngest poet to receive the honor, wrote “One Today,” for the occasion. 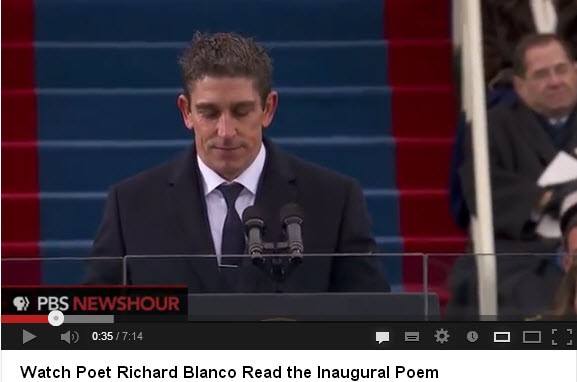 I only take it for the spare tire. Perhaps that will soon be the explanation given by Viagara users. German researchers experimenting on mice have found the drug converts undesirable white fat cells and could thus potentially melt the unwelcome “spare tire” around the midriff. In addition, the substance also decreases the risk of other complications caused by obesity. The results are now published in the Journal of the Federation of American Societies for Experimental Biology.

Could it happen here? So, brothers are to coach the two sides in the coming Super Bowl. Baltimore, coached by John Harbaugh, will play Jim Harbaugh’s San Francisco. Well I suppose it could happen here too. As my fellow North Melbourne supporters realise, Brad Scott will have his team at the MCG on AFL grand final day come September. The only doubt is about those Geelong Cats coached by brother Chris.

Aboriginal prisoner denied the right to breastfeed her newborn

Not milk? Beware the secret chemicals found in infant formulas

What does Viagara “convert white fat cells” too? “Bullets”?