FT goes ‘digital first’, cuts jobs. The day Pearson, owners of the Financial Times newspaper, detailed a weak trading update for 2012 the paper’s editor Lionel Barber has revealed plans to cut jobs and push deeper into what he calls a “digital first” environment which will see the paper move from a being “a news business” to […]

FT goes ‘digital first’, cuts jobs. The day Pearson, owners of the Financial Times newspaper, detailed a weak trading update for 2012 the paper’s editor Lionel Barber has revealed plans to cut jobs and push deeper into what he calls a “digital first” environment which will see the paper move from a being “a news business” to a “networked business”. The move is important: of all the world’s major papers, FT has gone furthest (and deepest) in transforming its business model to a digital world.

It leads with more than half its subscribers being digital, while revenues from digital areas such as advertising and subscriptions now make up more than 50% of total revenues for the FT Group. But Barber believes the paper has to change even further. In its trading update, Pearson revealed:

“The Financial Times Group will report good revenue growth for the full year, in spite of a slow fourth quarter caused by weaker advertising sales. Our digital and subscription-based revenues continued to grow well at both the FT and Mergermarket. The FT Group’s full-year profits will be significantly lower than in 2011, reflecting the absence of a contribution from FTSE International following its disposal and further actions to accelerate the shift from print to digital.”

That profit fall is self-inflicted though because Pearson sold the 50% stake in the FTSE index business to the London Stock Exchange for 450 million pounds cash in late 2011. That 50% stake contributed 20 million pounds of profit to the FT Group in 2011, so the loss of that money is hurtful.

There was no mention of the profit impact in the email to staff detailing the changes that was published in London overnight. Barber said the changes would be a “big cultural shift” for the business daily, with 35 jobs to go (after adding 10 new jobs to the digital business). The move will save £1.6 million (about $A2.5 million) a year according to the memo. — Glenn Dyer (read the full story here)

ABC finds its ‘right-wing Phillip Adams’. Former Howard government minister Amanda Vanstone is joining ABC Radio National as the permanent host of the Counterpoint program — the most regular forum for conservative and libertarian ideas on the network. Vanstone has been filling in as Counterpoint host over recent months following the departure of Michael Duffy and Paul Comrie-Thomson. ABC critics such as Gerard Henderson have long referenced Counterpoint’s title and timeslot – indeed its very existence – as proof that the ABC station is left leaning.

In other RN news, the full 2013 schedule released this morning shows Joe Gelonesi will take over as host of The Philosopher’s Zone following the death of Alan Saunders last year. Jason di Rosso will follow in departed RN veteran Julie Rigg’s footsteps by hosting a new film program The Final Cut. — Matthew Knott

Live from the Whitehouse. Seven’s graphics co-ordinator needs a good talking to … 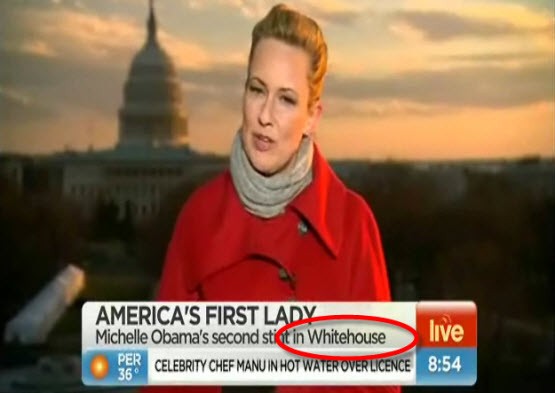 Video of the day. TV news crews have scrambled to get the best pictures from fires across NSW and Australia. Nine News host Peter Overton explains how the coverage is pulled together from the newsroom … 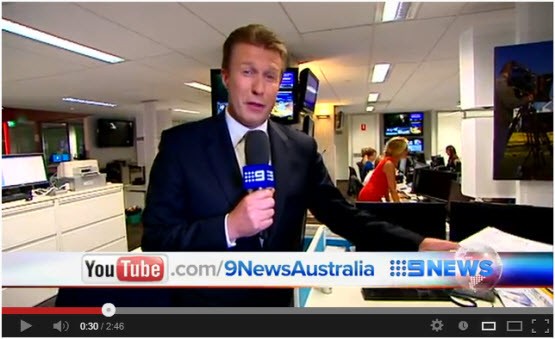 Front page of the day. As the full horror of the Algerian hostage incident is revealed, Britain’s Daily Telegraph warns of a new front in the war on terror … 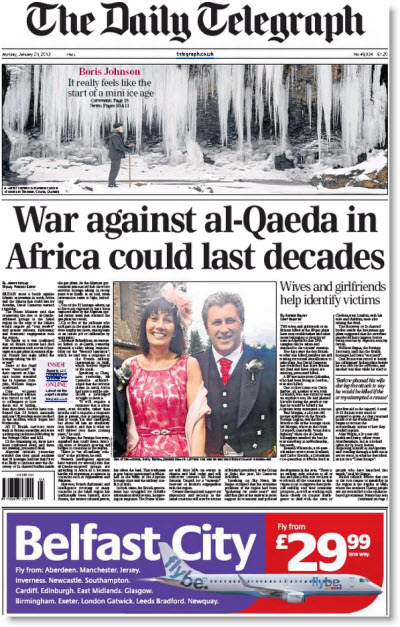 “Live”?
Would that second stint be in Mary (Whitehouse) – famous as she was – except she died?
Makes Michelle Obama sound like a parasite?