He went to Rio, and lost $35b: Albanese’s destructive path

The media let Tom Albanese off the hook too easily. The ousted Rio Tinto boss will go down as one of the most value-destroying executives in global corporate history. 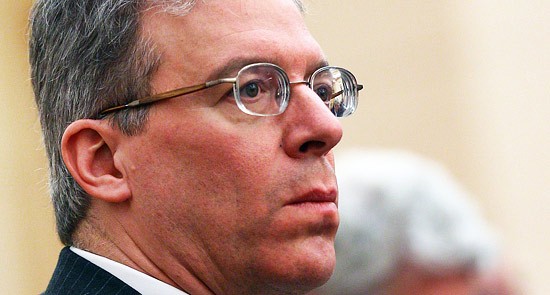 Despite an extraordinary number of column inches devoted to his sacking, the financial commentariat seems to have been relatively kind to sacked Rio Tinto chief executive Tom Albanese. A few have even praised his technical expertise, others have noted Albanese was relatively humble while some even reported on his dedication and love of mining.

But that is to forget that on Albanese’s watch Rio managed to destroy more shareholder value than any Australian company in business history — all during the greatest commodities boom this country has ever seen.

To truly understand Albanese legacy, a deeper understanding of what executives — especially executives at large companies do — is needed. At a company of Rio Tinto’s size, which has been around for almost a century, executives are capital allocators and politicians. They speak with large investors, give presentations to analysts and ultimately are responsible for determining how shareholders’ funds are allocated (great executives, like Warren Buffett or Michael Chaney, are essentially very good capital allocators). CEOs like Albanese and BHP’s Marius Kloppers have little or no direct involvement in a company’s operations, most likely nor would their direct reports — those operations were long established well before they entered the building.

Executives like Qantas CEO Alan Joyce or Myer’s Bernie Brookes may have presided over relatively poor shareholder returns, but their performance needs to be viewed in the context of their respective businesses operating in extremely difficult competitive environments. By contrast, Albanese was appointed Rio CEO when the iron ore price (the main driver of Rio’s profits) was around a quarter of its current level.

It is in this regard that the true horror of the Albanese era is apparent. When the main product you sell has increased in price by 400%, shareholders should be enjoying substantial appreciation. Instead, Rio shareholders have faced heavily dilutive capital raisings and more than $US30 billion in write-downs.

The only reason Rio Tinto wasn’t placed in the hands of administrators long ago was due to its extraordinary collection of iron assets (which were acquired long before Albanese was appointed) and the decade-long commodities boom. Under Albanese’s reign, Rio Tinto spent US$38 billion to purchase Alcan. In its first-half production report last year, Rio’s entire aluminium division (which included pre-existing aluminium assets) generated profits of US$24 million (the corresponding period in 2011 resulted in a US$344 million profit). Being generous, Rio’s aluminium assets might be worth a few billion. Rio has written down $29 billion from its $39 billion Alcan purchase so it’s unlikely the red ink is over.

“Not only was Albanese one of the most value destroying executives in global business history … but since being appointed in 2007 Rio Tinto shareholders paid him a king’s ransom for his trouble.”

Rio’s Alcan foray (which will probably amount to around US$35 billion) is easily the biggest ever corporate loss in Australian history (Rio is listed in both Australia and the UK, and headquartered in London). Rio’s Alcan disaster is 10 times the amount of money BHP lost on Magma Copper and almost 20 times the size of Alan Bond’s bankruptcy.

It’s been suggested the reason Albanese wasn’t terminated several years ago for the Alcan mess was that the decision wasn’t his doing — rather, it was pushed through by a domineering chairman in former Shell executive Paul Skinner. It’s been alleged Skinner drove the disastrous Alcan purchase as a poison pill to stave off the unwanted foray of BHP Billiton.

But while Skinner’s role in the Alcan purchase may have been significant, the purchase occurred after Albanese was appointed CEO. Moreover, Albanese was actually on the Rio Tinto board himself since early 2006, and as executive director would have played a significant role in approving the Alcan purchase (even if Skinner was a major driving force). Moreover, while Skinner was one of the world’s highest paid non-executive chairmen, he was paid only a fraction of what Albanese would receive.

But the notion of Albanese as mere deer in Skinner’s headlights was diminished somewhat after the second major acquisition that occurred under his watch: Rio’s purchase of ASX-listed Riversdale Mining for US$4 billion in June 2011. In just over a year Rio was forced to write-down US$3 billion from the carrying value of the assets purchased.

Had the Rio board acted when it should have to remove Albanese (in 2008, when the Alcan folly first became apparent) it’s likely the Riversdale folly wouldn’t have happened. In paying $4 billion for Riversdale, Rio vastly overestimated the volume of coal at Riversdale’s Mozambique coking coal project and erroneously believed it could barge coal down the Zambezi River. This wasn’t some small error — this was an act of abandoned financial recklessness from some of the most highly paid mining executives on the planet.

And Albanese’s replacement, the much lauded Brighton Grammar-educated Sam Walsh, is hardly blameless. While praised for his handling of Rio’s iron ore division, it’s difficult to not increase earnings when the product you’re selling is increasing in price at the rate that iron ore has. Moreover, Walsh was on the board and approved the Riversdale acquisition, so he’s hardly without blame.

Not only was Albanese one of the most value-destroying executives in global business history (second only to Gerald Levin, who led Time Warner’s US$80 billion AOL folly), but since being appointed in 2007 Rio Tinto shareholders paid him a king’s ransom for his trouble. Rio stated Albanese’s remuneration in pounds, but converting to Australian dollars (and not even including 2012) Albanese collected total remuneration (cash and shares) of around $60 million over four years.

Meanwhile, almost US$35 billion was destroyed.

And all the while we are being told these are the smartest guys in the room and the worlds problems are to big and complex for ordinary people (or people on ordinary wages) to sort out.

What’s (losing) $35 billion (of investors money) these days? These happened how many years ago – and did he draw a bonus between?

While AS(L)IC would rather chase much smaller fry, like Moylan :- “because our “press” was too lazy to research what he did, before rushing off to beat each other to spread that bullshit?”

yoyo mah;
They can have my old ‘bucket of bolts’ but I warn them, it is quite few ‘clicks’ to its’ parking lot.

Hey Adam, you’re a smart guy, so maybe you can answer this. We’re forever hearing from boards and remuneration consultants about aligning shareholder value with CEO remuneration. Is there some branch of mathematics I’m not familiar with where losing $35bill gets you rewarded with north of $50mill ?