Barack Obama's place in history will be decided this year. He has a small window to enact his ambitious agenda, and a hostile Congress to get it done. Dr David Smith of The United States Studies Centre explains. 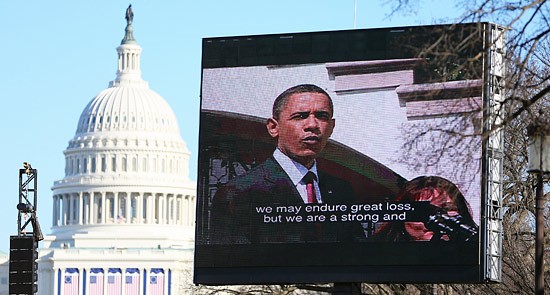 Second terms aren’t easy. We remember one-term US presidents like Jimmy Carter and George H.W. Bush as “losers”, but only presidents who make it to a second term have the chance to be remembered as genuine catastrophes.

The most unpopular living president is George W. Bush, whose self-congratulatory mishandling of Hurricane Katrina made Americans re-evaluate the disaster unfolding in Iraq. Nixon won 49 states in 1972 then used his office to persecute his enemies so obsessively and illegally that he nearly destroyed public trust in the institution of government.

Even some presidents we remember fondly were beset by paralysing scandals in their second terms. Bill Clinton was just the second president to be impeached. Ronald Reagan escaped the consequences of the Iran-Contra affair because of his increasingly oblivious appearance. This leaves Dwight Eisenhower, who left office in 1960, as the last president whose second term did not plunge the American people into some kind of nihilistic crisis. How can Barack Obama, as he enjoys his second inauguration this week, avoid a similar fate?

Obama does face huge risks in his second term. The greatest danger is that economic recovery will fail, leading to another four years of high joblessness and talk of irreversible American decline. Another economic crisis would also make it impossible for Obama to persuade others to go along with his ambitious legislative agenda. For the last four years, he has retained the precarious support of the people and his own party because there were so many other people to share the blame for the shocking state of the economy, including Bush and Congress. As time goes on, more of the blame will shift to Obama, and potential allies will have less incentive to cooperate with him.

Unlike executives in most other democracies, the president is not part of the legislature and his party often doesn’t control it. He must negotiate with Congress — even with congressmen on his own side — rather than simply commanding them. The president and each house of Congress wield a veto, meaning some agreement is necessary for any legislation to succeed. Also unlike other democracies, the executive and legislature have no way of getting rid of each other (short of impeachment, which is extremely rare). They are stuck with each other for fixed terms.

These circumstances can induce co-operation despite partisan division, as the president and Congress understand they must make concessions to each other to get anything done. However, with no “nuclear” threat like dissolution or no-confidence voting available, bitter stand-offs can go on for years without any prospect of resolution. Both sides turn to the public for support during these deadlocks, hoping to bring pressure by inciting voters. Here, the president usually has an advantage.

Obama’s power currently rests on his popularity relative to Congress and the sudden release of pressure that comes from being re-elected. Right now he can propose sweeping, problem-solving measures and use the “bully pulpit” to scold his Republican opponents for their pettiness and inaction. He can dare them to test his resolve now he no longer needs to worry about getting re-elected. And he can be confident of the near-unanimous support of other Democrats. This is why congressional Republicans look timid at the moment, retreating from threats over the debt ceiling and seemingly unable to decide on bargaining strategies.

“Everything depends on the economy not collapsing again, which is why Obama has been prepared to make concessions on the debt ceiling …”

This advantage, however, may not last very long. For members of the House, the only time horizon that matters is the midterm election in 2014. If the economy is improving and Obama’s popularity remains high, Democrats will remain firmly committed to their President, and Republicans may lose resolve in the face of an electoral wipe-out.

But economic failure or an administration scandal could embolden congressional Republicans seeking another 2010-style midterm victory, and as in 2010, Democrats would get nervous about supporting Obama.

After 2014 Obama’s power will inevitably dwindle, regardless of his personal standing or the composition of Congress. The next presidential campaign will begin, and legislators will gradually stop paying attention to the current president as the day approaches when no one has to co-operate with him any more. This means Obama really has two years rather than four to push through the legislation he hopes will define his legacy. His main tasks will be cementing his healthcare legislation, gun control and comprehensive immigration reform.

“Obamacare” is not out of the woods yet, despite having survived an election and a Supreme Court challenge. Some governors refuse to accept federal funds enabling the expansion of Medicaid in their states. Congressional Republicans will demand the dismantling of Obamacare provisions in looming negotiations over spending cuts. The next two years will decide whether Obamacare dies a death by a thousand cuts or is strengthened for future expansion.

Gun control is going to be extremely difficult, and it took the horror of Sandy Hook to convince Obama to stake significant political capital on it. A ban on semi-automatics or enlarged magazines is only a remote possibility despite Obama’s commitment to it. Democrats in conservative districts will worry support for a ban could cost them their seats, while Republicans who dare to co-operate will face NRA-backed primary challenges. Universal background checks for gun purchases have a better chance of passing, but even this popular measure will require significant political courage.

Now is the ideal time to pursue immigration reform, with Republicans fretting that the future of their party depends on attracting large numbers of Latinos. But national Republican strategists and legislators will face battles with party activists at the state level, who believe any “path to citizenship” for illegal immigrants is a ploy to create millions of new Democratic voters.

Everything depends on the economy not collapsing again, which is why Obama has been prepared to make concessions on the debt ceiling and the fiscal cliff despite his tough talk. The next few months will be crucial as the President and congressional Republicans try to figure out their relative bargaining power. Obama’s place in history may be decided in 2013.

“This leaves Dwight Eisenhower, who left office in 1960, as the last president whose second term did not plunge the American people into some kind of nihilistic crisis”

Uh, ever hear of Sputnik, October, 1957? This triggered paranoia in the public, and the launching of the Advanced Projects Research Agency (later becoming DARPA), NASA itself, and the Space Race (a prong of the Arms Race); more cynically, Kennedy invented the concept of a ‘missile gap’, which he exploited for political purposes in the 1960 Presidential election.

chpowell – I grew up with “missile gap” but have very scarey memories, in the late 70s, of the even more pernicious “window of vulnerability” which combined falsehoods, sabre rattling and nationalism gone nuts.

I wouldn’t cross the road to offer my bodily fluids to extinguish fire on their persons jointly or severally….as it were.

Amazing that a whole article could be written on Obama’s second term without once mentioning foreign policy. Obama is currently bombing at least six countries (all Muslim). According to the NY Times he has weekly meetings to decide who is going to be killed in a due proves free manner. He continues to have US special forces in more than 100 countries carrying out sabotage, killings etc etc. He continues to finance and arm terrorist proxies to fight wars where overt US intervention is politically difficult. He is a man utterly without scruple and one of the major war criminals of the 21st century. Yet Dr Smith thinks that gun control, healthcare “reform” and immigration are the big issues Obama faces. If only that we’re true.

It is a great pity that Crikey and the media generally have largely been silent on the extra judicial killing perpetrated by the US government(s). j.oneill is spot on. The UK Guardian did an article on this subject last year but I don’t recall any others. The US is a violent country particularly towards those, individually and collectively, who are deemed “enemies”. The consumerist state is controlled by the rich and they will not tolerate anything or anyone which will interfere in their addictive compulsion to heap upon themselves disproportionate wealth and power. The US presidents I have seen over my lifetime have always demonstrated that their primary task is to ensure US global hegemony. Obama will not fail in this task.