Timber looks to bailouts, concessions to ward off undertakers

What's the timber industry quietly seeking from government behind closed doors? What happens in these discussions will shape the debate for at least a decade, write Andrew Macintosh and Richard Denniss.

The native forest and forest product industries contribute a miniscule amount to the Australian economy (in the order of 0.15% to 0.20% of GDP). Despite this, it has dominated the minds and energies of many politicians and environmental policy makers for decades.

Among other things, it helped spark the emergence of the environmental movement in the 1960s and ’70s, defined a large part of the Hawke-Keating government’s environment agenda in the 1980s and 1990s, was central to the environmental achievements of the Carr, Beattie and Gallop state Labor governments in the late 1990s and early 2000s, and helped determine the outcome of the 2004 federal election.

In recent times, it has stolen much of the limelight in Tasmania as the Gillard and Giddings governments have tried — in collaboration with industry and green group representatives — to nut out a deal to refloat the industry. Much of the public debate around these negotiations has centred on the 500,000 hectares of proposed new reserves that are being offered in exchange for additional federal government funds. While important, of potential greater long-term significance are the policy concessions the industry is quietly seeking from government behind closed doors. What happens in these discussions will shape the forestry debate, and the native forest industry, for at least the next decade.

The native forest industry typically describes its operations as being “sawlog driven”. By this, it means that its primary target when harvesting is sawlogs. Pulplogs (i.e. those used to make wood chips and eventually paper products) are supposed to be merely an unavoidable by-product and, reflecting this, are often called “arisings”.

The reality is that the industry is dependent on pulplogs and woodchip exports. Since the late 1990s and early 2000s, native sawnwood producers have been muscled out of domestic markets by plantation softwoods and imported engineered wood products. This, along with supply shortages in certain areas, has resulted in a steady decline in sawlog production from native forests (Figure 1). 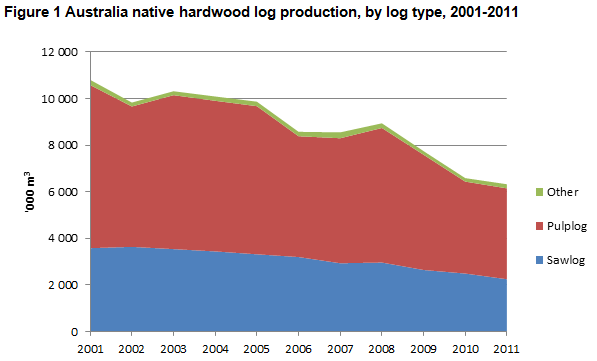 Despite this fall in sawlog and sawnwood production, for most of the 2000s, the industry was able to sustain itself on pulplogs and woodchips. The hammer blow came in 2008-2009, when a confluence of events — the global economic downturn, a shift in market preferences away from native forest products, increasing competition in woodchip export markets from South East Asian producers (particularly Vietnam and Thailand), and the appreciation of the Australian dollar — saw the demand for woodchip exports plummet and chip prices drop or stagnate.

The impact was immediate and the industry went into turmoil. Without the revenue from pulplogs and woodchips, mills closed, employment dropped and state forest agencies clocked up large losses, none more so than in Tasmania. Figure 2 shows the value of native forest log production (by log type) from Tasmania’s public native forests, which are managed by Forestry Tasmania, for the period 2008-2012. Figure 3 shows Forestry Tasmania’s net profit before tax and other items for the same period. These trends have been replicated around the country, although Tasmania has been the worst affected. 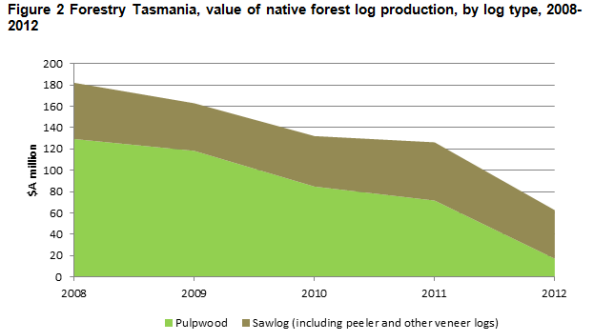 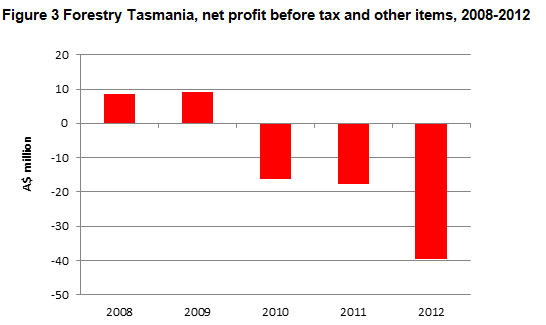 To arrest the decline, and stop it going the way of the whaling industry, the industry knows it needs something to fill the hole left by the shrunken woodchip export market. In the short term, the answer is direct government subsidies — bailouts to get it through the immediate crisis.

Beyond that, the industry is looking to two main policy levers to keep the undertakers away. The first is the Renewable Energy Target (RET). Rather than exporting native woodchips, the plan is to feed them into biomass burners to generate electricity. Without government help, this is not economically viable, at least not on a large-scale. To get around this, the industry is seeking handouts to fund the construction of new biomass burners and changes to the RET to ensure they are eligible to receive renewable energy certificates.

This is why the Federal Environment Minister, Tony Burke, recently announced an additional $25 million for “sustainable residue solutions” under the Tasmanian Forest Agreement; what he meant to say was a subsidy to help fund a new native forest biomass burner. We have previously written about the flaws in the plan to make native forest waste eligible under the RET.

The industry’s second saviour is the Carbon Farming Initiative (CFI). The CFI is an offset scheme that allows forest owners and others to generate offset credits — called Australian Carbon Credit Units (ACCUs) — for avoiding emissions or increasing the sequestration of carbon in sinks. These credits can be sold to polluters, who can use them to meet their liabilities under the carbon pricing scheme.

The plan being mooted within state forest agencies is to generate ACCUs by delaying the logging of native forests and using the revenues from the sale of the credits to sustain their operations (i.e. rather than harvesting a forest plot in year 1, it is harvested in year 5, which lowers net emissions over years 1-4). To make this happen, the industry needs the federal government to do two things:

The Australian government is currently working on both of these and details are expected to be released to the public within a few months.

These two policy mechanisms — the RET and CFI — are where the industry is devoting much of its current energy. Their lobbying success will determine what happens to Australia’s native forests and the native forest debate for years to come.

A useful guide through the verbiage.