Takeover gone bad: how Tom, Rio got in over their heads

There was a US$14 billion bounty on Tom Albanese after Rio Tinto was forced to writedown the value in its operations. The CEO and his board stand condemned for getting in over their heads. 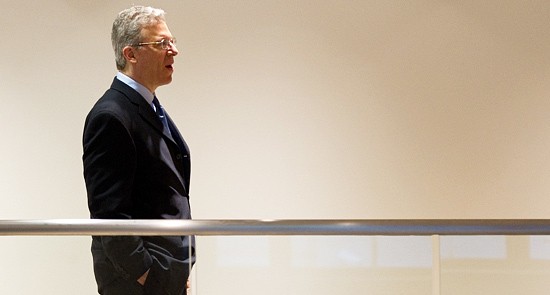 Few major global companies can be said to have destroyed so much real, cash value as Rio Tinto has managed to do in the last five years. There were 14 billion reasons why Tom Albanese had to go.

Rio was its own worst enemy. It had a festering financial black hole on its balance sheet that no one could fill: the $US38 billion takeover of Alcan in 2007, plus the much trumpeted Mozambique coal business which has turned to lead. The Alcan debacle, and now the botched move into coal in Mozambique, has done more damage to Rio than anything the mining tax may inflict.

The upshot from last night’s shock announcement of a US$14 billion writedown of aluminium and coal assets and the departure of the chief executive? Some $US38 billion spent on Alcan in 2007 ($US44 billion including debt, and on top of that huge pension liabilities) has now been slashed by about $US28 billion — more than 70%. In total Rio has written down or impaired assets to the tune of more than $US312 billion since 2008. In doing so, it has has also destroyed much of the profits Rio generated from the two resources booms, especially from iron ore and copper, its two strongest asset groups.

Albanese survived the Alcan debacle but was finally marched yesterday. Doug Ritchie, the manager deemed responsible for the coal deals in Mozambique, followed his boss out the door. What about some of the board who remain there from the Alcan deal days?

Alcan was bought when world aluminium prices were over $US2800 a tonne — they are now just over $US2000. Riversdale Coal in Mozambique (an Australian company) was bought in April 2011 when the price of coking coal was more than $US300 a tonne — it is now around $US165. Albanese, who often warned of the dangers of sovereign risk in Australia, was bought down by the oldest story in business: paying over the odds for an asset in a boom.

Far from the perceived dangers of sovereign risk, it was managerial incompetence that caused his departure. The balance sheet — with its expensive, over valued assets — was dragging down returns and hiking costs.

Rio took a series of writedowns and impairments in 2008 through 2012 on Alcan totalling $US17.3 billion (on that $US38 billion purchase). Last night, the world’s third biggest miner revealed further impairments of a total of $US14 billion on Alcan, other aluminium assets spun out of the troubled aluminium group last year, and $US3 billion in relation to Rio Tinto Coal Mozambique. Seeing it paid around $US4 billion for Riversdale Coal, the adventure into Africa has proven costly.

Last year Alcan revealed a $US8.9 billion write-off from the value of Alcan (after one of $US8.4 billion in 2008). So with the latest impairments, the $US38 billion paid for Alcan has been cut to less than $US10 billion. There have been bigger takeover disasters (AOL-TimeWarner for example) — but not recently. Mozambique Coal is now only worth a quarter of what Rio paid for it.

Rio Tinto’s experience adds to the growing body of research which says takeovers on the whole destroy value, not enhance it. In Rio’s case Alcan almost destroyed the company in the GFC when the company was almost taken over by Chinalco of China, and only escaped via a $US15.2 billion rights issue which funded the first big writedown and gave the company enough cash to survive.

Thankfully, regulators here and offshore vetoed the other great disaster that Rio could have found itself in: a merger with BHP Billiton, which has had its own problems with dud deals and decisions and close to $US9 billion in write downs and losses.

The reason why Mozambique Coal required a 75% writedown explains a lot about Rio and its management. Because it was a hostile bid, Rio could not do due diligence on the coal quality Riversdale had in Mozambique. Mining industry analysts say the coking coal turned out to be of lower quality than first believed and not the high quality, low sulphur coal produced in Queensland. And Rio confirmed last night its preferred plan to barge out coal from the mines down the Zambezi River was impossible, because of opposition from the Mozambique government. Instead, Rio faced building infrastructure, such as an independent rail project, something that became harder to justify given the lower quality coal and the halving in world coal prices.

Now we await the impact of the rapid and costly expansion of Rio’s WA iron ore operations and its huge new copper mine in Mongolia. Could they be the Alcan and Mozambique of the future for the company given their cost and the soft outlook for iron ore and copper prices?

He went to Rio, and lost $35b: Albanese’s destructive path

What will the Oz write about this? If a government did this they would be hounded but because one of the world’s big three miners does it and penalises all our super funds as the shares drop in value, it will be a one day wonder. After all the private sector makes good business decisions, doesn’t it?

Yes, solidified elctricity was always going to be a contentious and dubious investment with climate change.
Senior echelons of his management team would undoubtly had acturial and other reports on their desks. Perhaps their neo conservative commitments never allowed them to read these reports and others.

Did I hear, on the ABC news this am, that Albanese was denied his this year’s “bonus”? So how much did he make last year – and how much of that would be left?
Then an “expert” was asked was his successor a good choice? …. What, like Albanese, at the time of his ascension?

I like these sort of stories, to refelect on what our politicians “could be earning out there in Private-industryland” – as justification for pay rises, as if these executives are earning what they’re worth.

Thank you for this insightful article. How is it that Albanese could survive a debacle where his decisions as CEO lost $14b? As I understand it he should have been sacked not ratained on the board.
“Thankfully, regulators here and offshore vetoed the other great disaster that Rio could have found itself in”
It that the same regiulators that the big end of town say they don’t need?
Capitalism, don’t you love it.