Richard Farmer’s chunky bits: please, no debates about the debates

Let's hope Julia Gillard was correct this morning when she said an agreement can be reached "relatively soon" on the idea of a leaders' debates commission. For if there is one thing more boring than the debates themselves it is a debate about the debates.

The debate over debates that probably don’t matter. I found the assessment by American academics and pollsters on the importance of televised debates between the candidates an interesting sidelight to last year’s presidential election. On balance I was left with the impression that the three appearances had little impact on voting intentions despite the mighty efforts of the media pundits to give them great significance.

Hence my lack of interest in the continuing tooing and froing between Labor and the Coalition on the format debates will have in Australia later this year. My only hope is that Prime Minister Julia Gillard was correct this morning in expressing the hope that an agreement can be reached “relatively soon” on the idea of a leaders’ debates commission. For if there is one thing more boring than the debates themselves it is a debate about the debates.

The benefits of Latin. The Papacy is bringing back Latin. And all because of the need for brevity when communicating via Twitter. 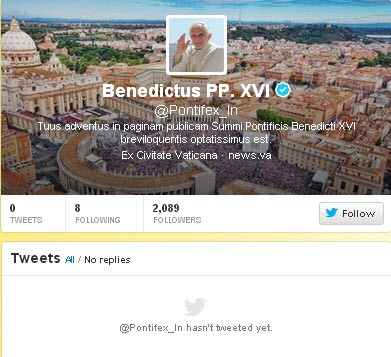 “Twitter is a tool which requires rapid communication,” he said.  In English you say ‘the corruption of the best one is horrible’; in Latin, three words suffice: ‘corrupt optima pessima’. It is a language which helps to think with precision and sobriety. And it has produced an exceptional heritage of science, knowledge and faith.”

Putting them in the slammer. From Michael Froomkin via Mark Thoma comes this insight into the American way. 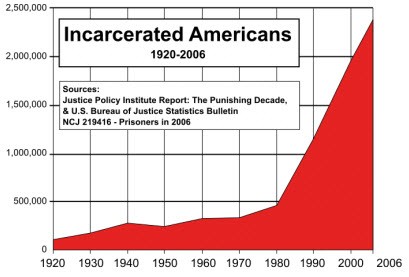 Froomkin comments “I knew it was bad, but not this bad.”

I admit the graph is a tiny bit misleading — it uses absolute numbers rather than percentages of population, which would be better. But even making that correction doesn’t change much: US population grew from 226.5 million in 1980 to 308.7 million in 2010, a 36% increase. Meanwhile, however, the number of persons incarcerated almost quadrupled. Our incarceration rate is by far the highest in the world. The United States has less than 5% of the world’s population. But it has almost a quarter of the world’s prisoners.

At the other end of the earth. Sweltering at home here in down town Duffy on the 10th anniversary of the bushfires that destroyed much of this Canberra suburb it’s natural enough for thoughts to turn to global warming.

But appropriate too for a reminder that one hot spell in one part of the world does not climate change make. 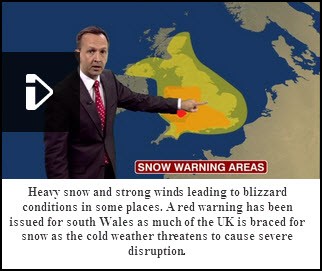 A quote for the day that p0liticians should note. ‘Dear Abby’ author Pauline Friedman Phillips, who wrote her advice column under the name Abigail van Buren, has died aged 94.

The less you talk, the more you’re listened to. — ABIGAIL VAN BUREN

Poll Bludger: will 2019 herald the triumphant return of the two-party system?

Leader debates? “The Americanization of Enmity”?

Nobody said that one hot spell is clear evidence of climate change, but you can’t help yourself, can you?

You said: “But appropriate too for a reminder that one hot spell in one part of the world does not climate change make.”

If this is the best you can offer as some kind of last-gasp stand against the unpleasant reality that is climate change, then why bother? It is, at base, an insult to the intelligence of your readers and it says something about your own intelligence regarding this subject.

Richard, truisms and straw man stuff such as this are not argument. They aren’t even civilised, given the severity of the problem referred to.

And, yes, I am cranky. And disappointed. This was disgusting and inappropriate. If you have something serious to say on the subject of climate change, then perhaps that is exactly what you should do.

Also remember that higher temperatures mean that the atmosphere can hold more water vapour. There’s also only a particular band in which snowstorms can occur – not only can it be too warm for snow but it can also be too cold. Which means that in particularly cold places warmer temperatures can mean more snow, by getting the temperature above that lower limit (while also lowering the likelihood of snow in warmer areas).