Even Radio National fill-in breakfast presenter John Doyle would admit his interview with the Prime Minister this morning was soft. Plus other media news of the day.

RIP ‘old-school journo’ Loizou. John Loizou — a “journalist’s journalist” — passed away in the Royal Perth Hospital this morning after a sudden illness. Ashley Manicaros, who worked with John at the NT News, described Loizou as a “grumpy, cantankerous, old-school journalist who knew how to dig up a scoop”.

Loizou not only broke news with a vigour and passion rarely seen but on occasion made it. The year fades into memory but Loizou was the object of then NT cabinet minister Mick Palmer’s attention when he “snotted” Loizou during a long afternoon at the local Petty Sessions bar. That “snotting” cemented Loizou’s place in the annals of Territory journalism as being the man responsible for the immortal headline “Toothless MP head butts reporter”. Palmer, first removing his watch and teeth, admitted to having “snotted” our man, then working at the Sunday Territorian.

It seems that news wasn’t the only thing that John could break. Paul Costigan of Darwin’s Roma Bar remembers that Loizou once “gave me a friendly hug and cracked two of my ribs”. Ex-Darwin barrister Brian Cassells was in Petty Sessions that day and remembers Loizou as “one of the last old-style journos. Dug for his own info and did not rely on ministerial releases. I was present at the infamous incident in the old Petty Sessions. John was a dedicated anarchist who never revealed his sources [and] whose accuracy was a cause of amazement to me. Last of his kind.” — Bob Gosford (read the full story here)

Eureka, it’s fixed! Oh wait … Before Christmas, Crikey detailed the problems the Herald Sun was having adapting its content-sharing arrangement with Alan Kohler’s Eureka Report to the printed page. Promising analyst Caleb Samson’s copy had appeared in the Hun under Tony Kaye’s byline and dinkus, while the popular Daily Telegraph had no such problems with the pickup. Now it seems misattribution disease has spread to the tabloid’s other northern sister, The Courier-Mail.

Over the break an excellent Samson preview of the local sharemarket’s prospects in 2013 appeared in News tabs around the country. While Samson’s dinkus was displayed prominently on page 69 of The Courier, the byline listed Eureka contributor Bruce Brammall’s name instead (Brammall doesn’t resemble Samson in the slightest). 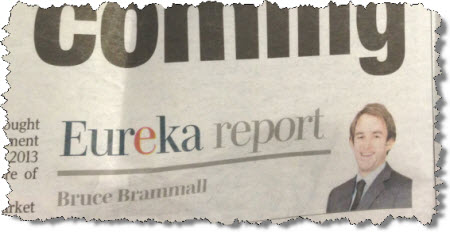 Gillard v Doyle on RN. Even Fran Kelly fill-in breakfast presenter John Doyle might admit his interview with the Prime Minister on RN this morning was just a little soft. But we might have learned more about Julia Gillard than in most interviews, with a 22-minute meandering chat on bushfires and abolishing state governments to her skills as a negotiator and knitter.

Doyle began by asking the PM whether she’d had a holiday, to which she replied by describing herself and partner Tim being in charge of the turkey at Christmas in Adelaide. And hobbies? “The knitting, definitely,” the PM said, explaining she uses knitting to relax after a long day. “The thing that’s good about the knitting is it takes enough of your attention that your mind can’t be racing a million miles an hour on everything else.”

On to more serious matters, including the PM’s visit to bushfire devastated Coonabarraban, compulsory voting — and getting rid of state governments. Asked if it was time to abolish the states, the PM said if we were to start again from scratch we wouldn’t create a three-tier government system: “I think you would create a two-tier system so you would have large regional councils which intersected with the federal government.”

Onto the carbon tax — and a free kick to explain why it was working — and Gillard assured Roy Slaven she was taught as a child that “if no one’s in the room the light stays off”. And after praising the PM for her negotiating skills, Doyle tried to draw her into the US gun debate with the question: “How do you deal with loony people?” Perhaps the same way she deals with loony ABC summer DJs: with grace and humour. — Crikey intern Jemimah Clegg

Insert headline here. Luckily firing all those sub-editors hasn’t made any noticeable impact. Hope someone is rolling in the deep sh-t for this appearance on page 17 of today’s Geelong Advertiser. As well as the brilliant headline, the article ends abruptly mid-sentence. 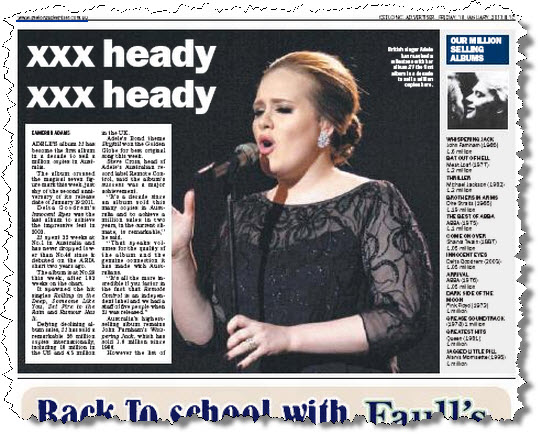 Video of the day. “Are the President’s kids more important than yours,” the National Rifle Association asked in its grubby ad yesterday. The pranksters at Funny or Die fire back: “Of course they are!” 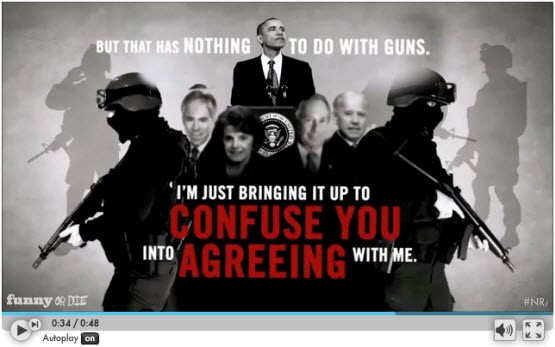 Front page of the day. France’s flagship daily is with the country’s troops in the struggle for Africa … 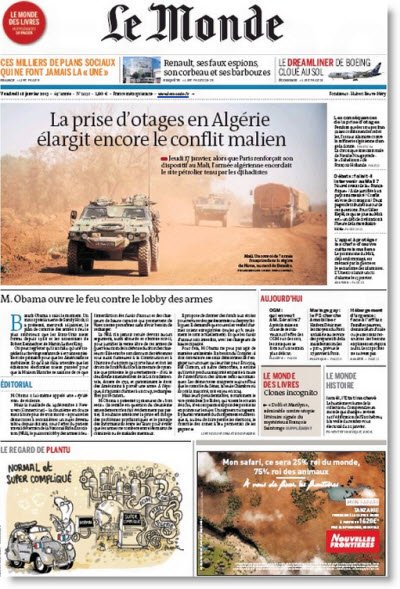 ‘How big are your balls?!’: Fairfax v News in Geelong ad war

The “Geelong Advertorial” – the bottom of the page half there :- “Back to school with Faull’s”?
Are they the editors?