The amount you have to lose at Rio Tinto before you lose your job: $13.3 billion. The amount crowdfunding platform Pozible has delivered to Australian filmmakers since mid-2010: $2.47 million. The amount it cost Guy Rundle to get a root canal in the UK: $21. It's all a numbers game, really.

When the Rio Tinto chief executive was appointed in 2007 shares in the company were trading above $83 on the Australian Stock Exchange. By 2008, at the height of mining activity in this country, he’d pushed the price above $120.

But what analysts began to worry about, and the full horror of which was revealed yesterday, was that the company was in way over its head. It paid US$38 billion for Canadian aluminium miner Alcan — it’s maybe worth US$28 billion now (after revealing further impairments of US$14 billion). And it had another US$3 billion haircut in Africa, with its coal mining operations in Mozambique failing to deliver.

As Albanese walked out the door last night after markets closed — a fall guy for an astonishing fall in value — shares in the company were at $64.60. 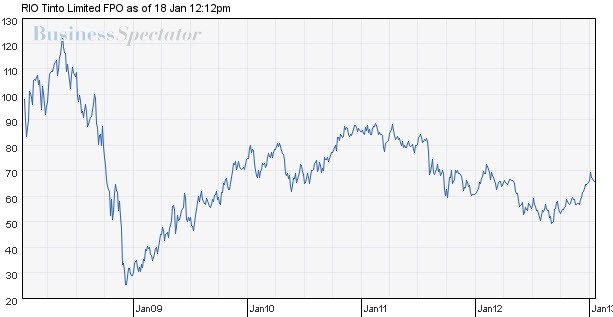 And what do investors think of the leadership change and the new guy, Perth player and iron ore boss Sam Walsh? Shares were trading up as Crikey hit deadline at $66.70.

It’s that number that might hurt Albanese more than any other.

A memorial service for the late medical research Professor Gavin Mooney and his partner Dr Del Weston — Mooney was a long-time contributor to the Crikey network — will be held this Sunday in Tasmania. The 2.30pm service will be held at Mountain River Hall south-west of Hobart. Our thoughts are still with family, friends and colleagues of the respected and beloved pair.

You knew it was coming, so here it is, our Boxing Day offer. But this is different to the other offers out there.

Usually $199, use the promo code BOXINGDAY2020 to get half price on your annual membership before midnight December 30.