In the wake of the Sandy Hook elementary shooting, President Barack Obama has proposed a range of new gun laws. What would it take to get the laws through the Republican-controlled House? 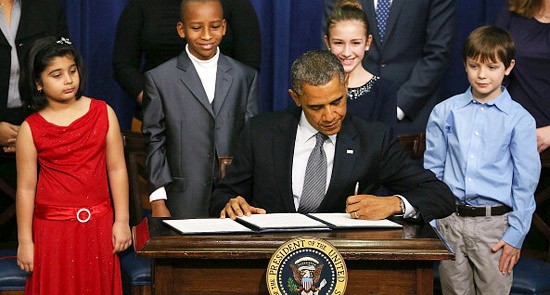 President Barack Obama has launched the biggest fight of his presidency, announcing a 32-point plan for gun control in the US, including an extension of background checks on all buyers, harsher penalties for gun traffickers and a renewal of the ban on assault-style weapons that was lifted in the Bush presidency. All of these measures will require the approval of Congress, which is unlikely to be achieved.

Obama also issued 23 executive orders, which don’t require Congressional approval. Most of these relate to research that the Bush administration had banned — such as once again allowing the Centre for Disease Control to track gun death and injury statistics, and appointing a director to the post of the Alcohol, Tobacco and Firearms Bureau (which has been vacant for six years).

Obama launched the proposed initiatives at a full-bore ceremony, so to speak, which included parents of some of the children killed in the Sandy Hook massacre, and with four small children on stage — all of whom had written to Obama, asking him to stop gun violence.

There isn’t much doubt that these measures would reduce gun deaths — assault-style weapons were banned from 1994 to 2004 and mass killings reduced in that time. And imposing background checks on all buyers would extend that process to things such as gun fairs, where, currently, anyone one can rock up and get a gat. One estimate is that 90% of guns used in crimes are bought in that way.

But the odds of getting any of these measures through are long indeed. The Republican-controlled House, in the personage of speaker John Boehner, took a minimal approach amid the emotionally charged launch of Obama’s proposals, with the Republican supremo indicating that they would wait to see what the President put on the table.

However Boehner himself is under pressure from the Right of his party, including the Tea Party caucus, after he and other centre-right (by US standards) Republicans voted for a deal on the “fiscal cliff” legislation at the end of last year (while other Republicans, such as majority leader Eric Cantor, voted against). Most believe that he will wait until the Sandy Hook massacre anger has receded a little, using parliamentary tactics to keep the package from a House vote, and then reject the deal in toto.

Thus the pressure is on Obama to keep the measures moving fast through Congress, and maintain them in the public eye, so that the outrage will remain fresh. He has been assisted in that task by the demented antics of the National Rifle Association, whose response to the Sandy Hook massacre was to demand that armed guards be placed in every school in the country. Their ad riffs on that theme, asking why President Obama’s children have armed guards at their school, while your kids are denied that protection, and calling Obama an elitist.

The obvious answer to that question is because the President’s children are the children of the President, but it’s a little more complicated than that. The Obama children’s school has an armed guard anyway, as do many private schools, part of the privatisation and atomisation of American experience.

But the ad’s focus on Obama’s children has attracted widespread opprobrium and proved an early own goal for the gun lobby, who had already suffered a blow from NRA leader Wayne LaPierre’s bizarre post-Sandy Hook appearance, in which he blamed violent videos, Hollywood and just about everything, including food additives, for school shootings — save for guns. “If it’s crazy to call for armed officers in our schools to protect our children, then call me crazy,” LaPierre said, and many have availed themselves of the opportunity.

Had American government been the sort of place where you could get a bill up in 48 hours, then in the wake of Sandy Hook, Obama and the Democrats might have been able to get something through. But the horror has already faded sufficiently to make it easier for any substantial changes to be resisted — even with the spectacle of four small children on stage, giving voice to a widespread fear of American children, that they do not feel safe.

That is a pretty awful condition for a culture to find itself in, but there is a darker thought lurking in the shadows — and that is that what would really get a bill like that through is another massacre, hot on the heels of the last. Another massacre there will be, and the NRA’s grim vision of a lockdown society — unfreedom if ever there was such — is more likely to come to pass than significant gun control. But sometimes the battle must be lost now to be won later, candlelight vigils guiding the way.

If you want to get an idea of how dysfunctional American society is, have a look at ‘Egnorance’, a blog written by Michael Egnor, a tenured professor of neurosurgery at Stony Brook University, New York.

He’s a self proclaimed conservative. And he’s also crazy, paranoid and obsessed with gun control (or rather preventing it happening). Almost immediately after the Newtown massacre, he was calling for armed security guards in all K-12 schools, with the mandate to take down any armed intruder within 60 seconds.

What if an armed school security guard gets peed off by students and turns the gun on same said students to demonstrate the American way of releasing a pent up emotion? Should all firies, ambulance personell and hospital also be armed? The NRA will suggest that in due course no doubt.

This NRA mob are aligned with the mob who hold the balance of power in the NSW State Senate.
Fatty has sold our souls to these lunatics. What next? Give the roos guns so they can shoot back in the national parks?
Cant wait to see what the explanation will be when the POTUS is unfortunate enough to be standing in the way of an innocently fired and unfortunately aimed second amendment right. It wasn’t the gun that killed him?

The very left commonly oppose mild changes proposed by the moderate left on the grounds that mild changes would detract from pressure to introduce bigger changes. I remain deeply sceptical of that tactic. I prefer to secure modest, small, even piddling change as long as it is in the right – err, Left – direction. And so with gun control.

‘Get it while you can’, as the late Ms Joplin sung Jerry Ragovoy and Mort Schuman’s lyrics about another matter.