In a rare admission, The Australian has corrected the record on its reporting on climate change. And other media tidbits.

The Oz backflips on climate claims. The Australian has issued a rare correction on climate change, for a story which claimed rising sea levels were “not linked to warming”.

The story, which appeared under an “exclusive” tag on Tuesday and was written by environment editor Graham Lloyd, was based on a recent scientific paper in the Journal of Climate. Lloyd wrote that “the latest science on sea level rises has found no link to global warming”.

Over the last three days, Crikey read the research paper, looked into Lloyd’s three articles on the subject, and highlighted inaccuracies in the way the research was presented (read Crikey’s stories here and here). A correction appeared in The Australian today, and Lloyd’s original story has been taken down. 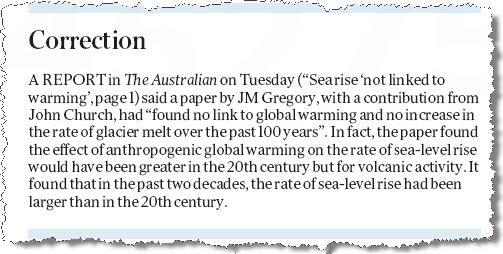 Crikey understands the scientist relied on in Lloyd’s story to back up the claim of sea level rise not being linked to warming, the CSIRO’s Dr John Church, has expressed disappointment with that story. At least one environment group has complained to The Oz about the story.

The Australian has been criticised in the past for running stories which some perceive as misrepresenting the science on anthropogenic climate change, but it has rarely issued corrections on its climate change stories. — Cathy Alexander

New editor for Meanjin. The editor of storied literary journal Meanjin, Sally Heath, is stepping down from the role. Her 25-year-old deputy will take over.

Crikey can reveal that Heath, who has edited the prestigious Melbourne-based quarterly for the past two years, will soon hand over to associate editor Zora Sanders.

Heath said this morning that she remain on as executive publisher of Meanjin and the magazine’s publisher, Melbourne University Press.

“The March journal will be our handover,” Heath, a former senior editor at The Age, told Crikey.

The handover to Sanders, a former editor of Melbourne Uni student mag Farrago, is timed to coincide with the launch of Meanjin’s iPad app.

Meanjin, launched in 1940, has published literary greats such as Ezra Pound and Patrick White, and is well-known for publishing Arthur Phillips’s influential essay “The Cultural Cringe”.

Heath took over from Sophie Cunningham in early 2011 and has expanded the mag’s online presence.  — Matthew Knott

Silly season specials. Crikey has been tracking some of the more ridiculous stories to make it into the nation’s newspapers over summer and, while there’s still plenty of time left for entries, we think a new favourite has emerged.

Page eight and nine of today’s Daily Telegraph are devoted to a story, “Having fun the old-fashioned way: Why you don’t need a computer to enjoy a big day out in NSW”. As reporter Nathan Klein reveals, “it may seem hard to believe now that we rely on technology so much, but we don’t need computers or smartphones to have fun”.

In an effort worthy of Lonely Planet, the Tele then goes on to list a stunningly original range of harbour city activities including going to the theatre, visiting an art gallery, going for a walk or dangling a fishing line. Who’d have thunk it? 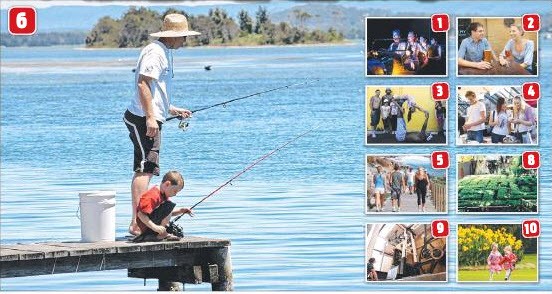 Meanwhile, the clickbaiters over at Fairfax online must have thought they were on to a big one today with tech editor Asher Moses’ exposé of fast food chain Subway’s famous footlong subs only measuring up to 11 inches. 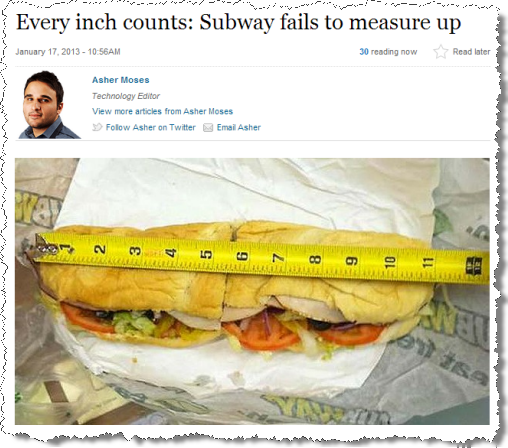 The taste of summer.

The Herald honks its horn. The Australian and The Australian Financial Review love to tell readers “we told you so”. Today, in a relatively rare brag, The Sydney Morning Herald bathes in its own glory for a moment.

However we doubt the paper’s subs — or was it those pesky peeps at Pagemasters? — will be getting a pat on the back for this (now corrected) online effort.

Front page of the day. The London Evening Standard covers a helicopter crash that appears to have killed two people after the chopper crashed into a construction crane on top of Britain’s tallest high-rise building. 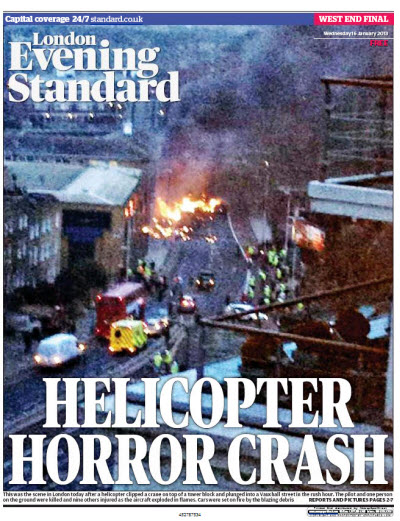 just on the silly season specials…”Nicknames. The Crikey office became embroiled in a late-afternoon discussion this week about whether Tony Abbott is known by the nickname “Abbo” etc etc etc……from Crikey today….seems everyone’s a littl guilty n’est–ce pas?

They’re footlong in the USA, but here, they’ve been metricated. :^)

So that “Size does matter” beat-off?
What’s that “fold” (@ about the 6 and three quarter inches mark) in the roll (also cut at exactly the 5.5 inches mark, dividing it into two exact halves)?
….. and what happens if you’re only a size 7?