Crikey says: what Obama’s up against

The NRA takes on Obama. Downer takes on SA. Oprah "takes on" Lance. Crikey takes on The Australian over climate change. Plus some tips on how to make a buck from the Ten Network. What are you taking on in reading Crikey today?

What’s Barack Obama up against in taking back the most dangerous firearms from US citizens? Check out this latest ad from the National Rifle Association … 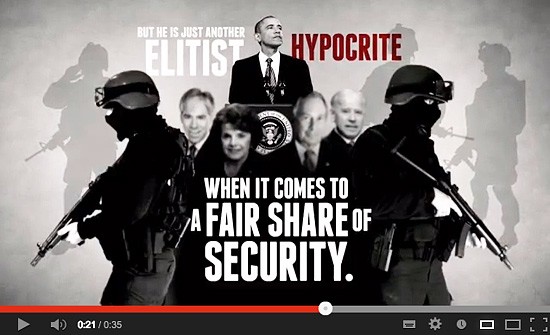 Obama’s kids are protected by armed guards but he’s against placing them in schools, the NRA argues. The White House calls the ad “repugnant and cowardly”. No kidding.

Obama’s new 32-point plan on gun control might seem logical to Australians, who have witnessed a sharp decline in gun violence since the Port Arthur massacre. But as Guy Rundle writes today, the President will find himself at war with the Republican-dominated House when he tries to write his proposals into law.

It’s a brave attempt which, if successful, would stand as one of Obama’s greatest and most enduring legacies from two terms in the Oval Office. But he’ll have to run through the line of fire first.

I wonder how many people in the affected by the last gun attack supported the NRA on previous occasions of other attacks? Furthermore, if the second amendment is so closely followed by American as a right to bear arms then it must also be observed as to what types of firearms were available at the time of formulating the second amendment, I presume not the assault weapons currently available. Meanwhile, it can be safely assumed that random high profile events will continue to occur. The land of god, jesus, bibles, pastors, and guns. The only way there would be a concerted campaign on some kind of gun control is if someone did a Ms Gifford to Lupert Mordach; then Fux News would lead the charge and take on the NRA. Not like its current support of all things NRA. I wouldn’t live in the good ol’ U.S. rent free.

Repugnant and cowardly? Sure, but also … true. And I bet that’s what prompted the outburst.

@ Mike Smith – It is the very culture of the gun lovers (read NRA) in the great USofA which dictates that the children of the President (ANY President) need to be protected by armed guards.
Most civilised countries do not require such drastic measures for the children of their heads of state, let alone the children of ordinary citizens. You have to ask why?