Julia Gillard returned to the desk early and soaked up media coverage on bushfires and the royal commission. And Jenny Macklin's gaffe won her headlines for the wrong reasons.

As our politicians return from holidays it’s no surprise to see Prime Minister Julia Gillard receiving the most media coverage, in the main for her attendance at the Tassie bushfires (along with Tasmanian Premier Lara Giddings) and for the appointment of NSW Supreme Court judge Peter McClellan to head the royal commission into institutional child s-xual abuse. The six commissioners meet in Sydney today for the first time.

Unusual, however, is the sight of Families Minister Jenny Macklin taking second place for media mentions, ousting perennial number two, Opposition Leader Tony Abbott, by saying she could survive on the $35-a-day Newstart allowance — and subsequently apologising as protesters demonstrated outside her Melbourne office. (Note: we’ve searched back to January 1 for our first outing in 2013.)

But none of that has hurt the ALP’s run at the flag later this year (election prediction: October 19) with this week’s Newspoll showing a Houdini act could be on the cards as punters ponder three years of unemployment levels below 5.5% and record low interest rates. The same polling showed the government pinching popularity from the Greens, whose struggle to stay relevant saw leader Christine Milne making headlines endorsing the Whitehaven anti-coal hoax this week.

Meanwhile, Sports Minister Kate Lundy made news releasing the review into anti-doping governance at Cycling Australia, while former Speaker Peter Slipper’s February 15 court appearance over alleged cab charge misuse could cost him his pension and a seat on the crossbenches. 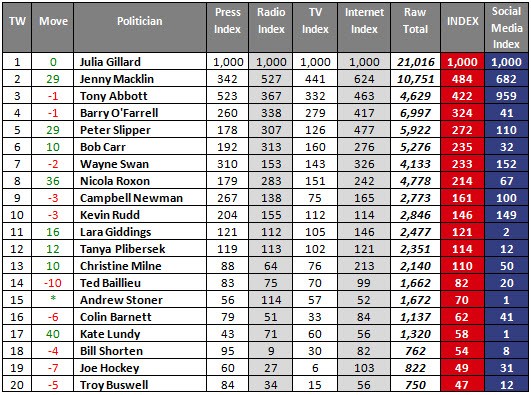 Kevin Rudd played at politicking, calling on his government to show “a bit of heart” and increase the $245-per-week national unemployment benefit and pushing a policy on Syria he knows won’t get up.

Taking leave to fight fires at Nowra with the Davidson Rural Fire Brigade has done little to dent Abbott’s social media presence. Same with K-Rudd, who starts the year where he left off: never far from the conversation in the Twittersphere.

Accepting his best actor award at the Golden Globes, Hugh Jackman revealed he nearly quit his role in Les Miserables just prior to shooting.

Parallax Podcast: Olympus Has Fallen, Oblivion, Sleepwalk with Me & more