Another George Bush plans to try his hand at politics and this one's half Hispanic. George P. Bush, the son of former Florida Gov. Jeb Bush and a Mexican-born mother, is considering a political career.

Those missing rivers of gold. The growing dominance of the internet when it comes to unemployed people looking for jobs shows up clearly in figures this morning from the Australian Bureau of Statistics. 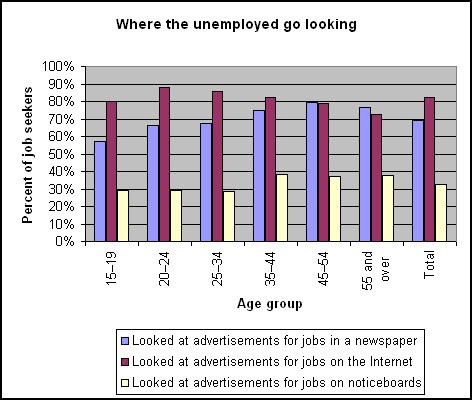 Only among older job seekers do newspapers remain the major search medium.

The ABS survey of unemployed people in July 2012 also shows that almost one in five (19.6%) of those without a job had not had one for more than a year. The majority (80%) of persons unemployed in that month had been unemployed for less than one year.

The percentage of unemployed persons who had been unemployed for one year or more was not statistically significant between 2012 (19.6%) and 2011 (19.2%).

Keeping it in the family. Another George Bush plans to try his hand at politics and this one’s half Hispanic. George P. Bush, the son of former Florida Gov. Jeb Bush and a Mexican-born mother, led the Pledge of Allegiance before the 1988 Republican National Convention, when his grandfather George H.W. Bush was nominated as the presidential candidate. The would-be fourth generation Bush politician has not yet decided, says NPR, what position to stand for but is considering those of Texas land commissioner and Texas attorney general.

Another top 10 year. NASA’s Goddard Institute for Space Studies (GISS) released in New York overnight an updated analysis that compares temperatures around the globe in 2012 to the average global temperature from the mid-20th century. It shows 2012 was the ninth warmest of any year since 1880, continuing a long-term trend of rising global temperatures. With the exception of 1998, the nine warmest years in the 132-year record all have occurred since 2000, with 2010 and 2005 ranking as the hottest years on record. Support for the Australian way. A US study provides evidence that the ground breaking Australian graphic health photos on cigarette packs are more powerful than words alone in warning people from different income and racial groups about the dangers of smoking. The study, from the Legacy Foundation and the Harvard School of Public Health, surveyed 3,300 adult smoker. Some of them received written warnings about the dangers of smoking while others received highly graphic images showing possible consequences. Those who saw the images reported being more upset, scared and motivated to quit than those who saw written warnings alone. The report says:

“Given their great reach, pictorial health warning labels may be one of the few tobacco control policies that have the potential to reduce communication inequalities across groups. Policies that establish strong pictorial warning labels on tobacco packaging may be instrumental in reducing the toll of the tobacco epidemic, particularly within vulnerable communities.”

Death of a cyclone. NASA’s Aqua satellite showed how Tropical Cyclone Narelle weakened from a powerful tropical cyclone with winds of 115 knots (~132 mph), equivalent to a category four hurricane on the Saffir-Simpson scale, to a tropical storm as it made its way southward paralleling the coast of Western Australia.