War in Mali: what you need to know (and why it’s not Iraq)

Mali isn't Iraq. It isn't even Afghanistan. But whether that's enough to promise success for François Hollande, only time will tell.

With remarkably little fanfare, France has a new war on its hands, this time in its former African colony of Mali. Its air force has been bombing rebel-held areas in the north of the country, and some 550 French troops – soon to be about 2,500 – are deployed alongside local forces in central Mali. Rebel fighters in response have evacuated a number of towns in the north, but have also counter-attacked, seizing the central town of Diabaly.

Mali’s problems mostly began last year, as is often the case, with a coup. Army officers unseated the civilian president in March, and after agreeing to a transitional plan to return to democracy they intervened again just last month to remove the interim prime minister and reassert military control. The rebels took advantage of the distraction to take control of  most of the northern half of Mali, and there was seen to be a real risk of government forces collapsing altogether.

Other western countries, including Canada and Britain, have provided logistical support for the intervention, called “Operation Serval”, and forces from neighboring West African countries are to be involved under the terms of UN Security Council resolution 2085, passed before Christmas. Secretary-general Ban Ki-Moon has expressed his support for the recent action.

The official justifications are all about terrorism: the Islamists, according to French president François Hollande, must be stopped in Mali before they threaten other countries in Africa and even in Europe. The militias are not freedom fighters but terrorists, linked to al-Qaeda, and there is a common international interest in rooting them out.

It all sounds very familiar. So is this France’s opportunity to revisit the quagmires of Iraq and Afghanistan? One who seems to think so is Dominique de Villepin, the former foreign minister who in 2003 was the main spokesman of France’s opposition to the Iraq war. Writing in Le Journal du Dimanche at the weekend, de Villepin came out strongly against Operation Serval (my translation):

But let us not give in to the reflex of war for the sake of war. I am worried by the unanimity of going to war, the apparent haste, the déjà vu of the arguments about “war against terrorism”. This is not France. Let us draw lessons from the decade of lost wars, in Afghanistan, in Iraq, in Libya.

These wars have never built a solid and democratic state.

It’s understandable for de Villepin to be concerned about what he calls “the neoconservative virus”. On the other hand, there are some fairly obvious differences between Mali and Iraq or Afghanistan.

Whether those differences will be enough to confine Serval to the short, sharp, efficient operation that Hollande evidently intends is impossible to say. They may not. Even if they are, it will hardly rehabilitate the whole neoconservative project.

But nor will it solve the key problem that has plagued so many countries in Africa and elsewhere: how to maintain a military force that is strong enough to provide security but not be tempted to meddle in politics.

Mapping a reminiscent non-war in Africa 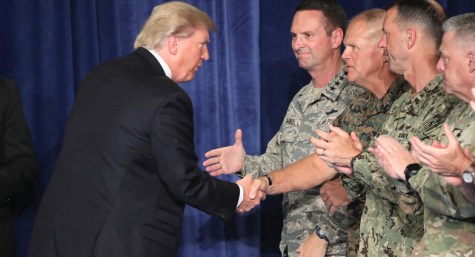 Happy warmonger Trump joins the circle of a perpetual war

‘No credible threat’ from the virus of radicalisation