The world's most influential climate scientist Rajendra Pachauri speaks to Crikey on the need for sanity and fair reporting in media coverage of climate change -- and explains why Australia should care. 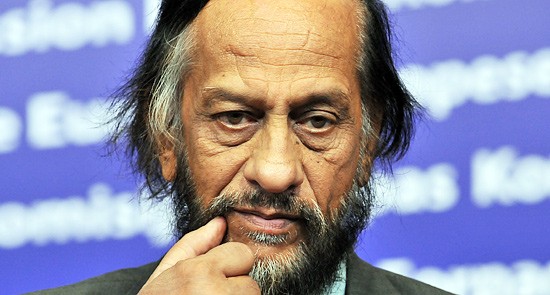 As The Australian claims sea level rise is not linked to global warming, the world’s most influential climate scientist has called on “sane and rational voices” to speak out and correct the record.

More than 250 scientists have gathered in Hobart today for a summit of the Intergovernmental Panel on Climate Change, the UN’s climate science body. The Oz marked the summit’s opening with a front-page “exclusive” story which claimed there was “no link” between sea level rises and global warming.

In a telephone interview, Crikey asked the long-term chair of the IPCC Dr Rajendra Pachauri, in Tasmania for the summit, about the story.

“What is particularly important is that sane and rational voices must respond to these questions and this scepticism, and I think that should get adequate currency,” said Pachauri, who in 2007 accepted the Nobel Peace Prize on behalf of the IPCC. “Then people can make up their minds on their own.”

He called on the media to take responsibility for the stories they run. “Unfortunately in several parts of the world, the media gives disproportionate coverage to those who take a contrarian view, even if they represent a very very small percentage of either the scientific consensus or public opinion. They get almost equal billing, and to my mind that seems a little unfair,” he said.

The Australian has long run a sceptical line on climate change, particularly in its opinion pages. Today’s story, written by environment editor Graham Lloyd, relied on a paper co-authored by Australian scientist Dr John Church. The paper apparently “said it could not link climate change and the rate of sea level rises in the 20th century”.

But Church, a sea level expert with the CSIRO, told a media conference today that was not an accurate description of the paper.

“So sea level clearly is linked to climate change, it is clearly linked to increases in greenhouse gases, and that’s actually in the paper which was quoted by The Australian. So the quote is, I’m sorry, inaccurate,” said Church, a co-ordinating lead author with the IPCC.

Despite the persistence of scepticism, Pachauri was upbeat about global acceptance of the science of human-induced climate change. He thought some prominent sceptics were changing their minds: “I hope that will be the case once they see all the compelling scientific evidence, in this country and in other parts of the world.”

The public tended to respond slowly to difficult realities, he says, so time was needed to change attitudes “Business-as-usual has a very strong force behind it, and therefore to move away from business-as-usual takes time, takes effort, and I imagine you’ll see signs of change in the near future,” he said.

The IPCC chief was confident the world was getting the message on climate change: “I think the extent of awareness is growing very rapidly … I feel quite optimistic about the way things are going”.

Pachauri praised Australia’s carbon price, saying the IPCC had found a price on carbon was one of the most effective ways of encouraging low-carbon technology. “I think what Australia has done has to be commended and I hope other parts of the world will also see something similar being done,” he said. He also called on governments to remove subsidies on fossil fuels because they acted as a deterrent to alternative sources of energy.

The IPCC issues major reports on climate change every five or six years; the last was in 2007, and this next report (which is the fifth) is due for release in September this year. Writing the report is a laborious process involving hundreds of scientists, multiple drafts and tens of thousands of comments from experts on each draft. The final report then has to be OK-ed by every member state of the UN’s climate body. A draft of the fifth report was leaked by a climate sceptic late last year.

Thomas Stocker, co-chair of that part of the IPCC which is meeting in Hobart (it’s one of a number of working groups on the fifth report), says 255 scientists from 39 countries are at the Hobart summit considering more than 30,000 comments received on the previous draft of the report. “We want to get this right,” Stocker told a media conference today.

Church says the fifth report has made significant scientific progress on the effects of climate change on sea level rise; this report would be more advanced than the previous one.

The IPCC experts speaking at the opening of the summit would not be drawn on what else the fifth report might contain, or on how precisely the scientists would be able to project the impacts of climate change. The summit runs until Saturday.

Why wouldn’t it be “exclusive”?
Who else (with a sense of reality) would touch that sort of spin?
[Is Murdoch – with his trolls spreading his word – a climate science expert, or a PR mogul, with a barrow to ply?]

“Business-as-usual has a very strong force behind it” or is it the case of exploitation as usual. Murdoch and his fellow-travellers (and not only in the media) from the big end of towns have only one business and that is gain as much capital for them at the expense of the rest of us, and indeed the planet.
The trouble with this attitude is that too late will be too late for all, not just he and his ilk.
Just one question, what scientific qualifications has Graham Lloyd, surely not a comms degree from some Uni to allow such scientific pontification.

This situation really highlights an issue with current reporting of climate science in Australian (and generally international) media. That someone like Graham Lloyd is given an equal voice in the climate change dialogue as someone truly credentialed like Dr Pachauri…

An expert says one thing, a journalist (mis)interprets it another way and suddenly we feel justified simply to do nothing at all.

Dr Church should demand a correction to the story or right of reply. If that is not granted then he should lodge a complaint to the [toothless] Press Council.

Dr Pachauri has NO Climate science qualifications – he is a generally qualified bureaucrat who has a vested interest in climate change – look up TERI.