Curved TV screens and Android ovens were among the most impressive items on display at this year's Consumer Electronics Show. SmartCompany's Patrick Stafford picks his top 10 wacky gadgets. 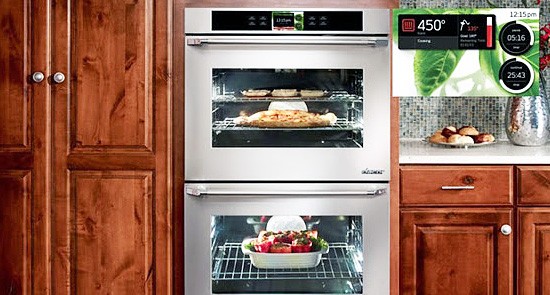 Another Consumer Electronics Show has come and gone, and we’re left with a range of wacky and weird gadgets that may or may not ever see the light of day.

While CES 2013 was still huge, many analysts are questioning whether CES as a trade show is likely to continue in its current form, given so many of the major companies are being blindsided by crowdfunded projects and smaller companies.

Samsung showed off some new technology in its curved television screens, and it also showed off a phone with a flexible display – bendable technology is clearly the order of the day.

However, there wasn’t really anything new. Many of the gadgets are iterations of what has come before them – any tech revolution has been left for another year. While the tablets, smartphones and cameras were all very nice, they’re nothing we haven’t seen before.

Telsyte research director Foad Fadaghi tells Crikey sister site SmartCompany most of what we’ve seen has been a stepping stone on previous technology.

“I think we’re seeing improvements in the smartphone space with screen sizes, and the functionality of the smartphone is increasing as well,” he says.

“It’s all kind of incremental change that we’re seeing. Some of those are significant, but for the most part, it’s improvement on what’s come before.”

Despite no revolutions in how we use technology, it was still an excellent year for gadget lovers. Here are 10 of the best gadgets shown off at CES 2013:

Too many phones are trying to catch up to the iPhone, and only a few are managing to offer something new. The Xperia Z, along with the Galaxy, will be one to watch.

Oh, and it’s water-resistant, too.

We’re not likely to actually see this fridge come to market, but that doesn’t make it any less interesting. The T9000 has a touch screen that allows you to connect with apps so you won’t ever forget a recipe or ingredients while shopping. Nifty.

We’re not sure anyone needs an oven that’s controlled by the Android operating system, but anything goes at CES 2013. This gadget features an app you can use on your phone to monitor temperatures.

The point-and-shoot camera category is largely losing its relevance thanks to smartphones, but the Canon PowerShot N still provides good competition.

As a trend, more cameras at CES included Wi-Fi and 3G connectivity.

The founders of the Pebble Watch have been in the spotlight ever since they raised several million dollars last year. The gadget’s promise is impressive – to connect with your phone via BlueTooth and update you of notifications and calls on the screen. You can also control your music player with the device.

They finally showed off the gadget at CES – and it looks good, despite the slightly high $150 price tag.

The hybrid laptop ThinkPad Helix raised a few eyebrows when it showed off new features, like the ability to detach the screen from the keyboard to become a tablet – and both have separate batteries.

There are always plenty of televisions at CES, and this year the main manufacturers were keen to show off some new technology including 4K screen tech – which offers 3840 by 2160 resolution. Unfortunately they won’t see shelf life for a while, but the concept is still fascinating.

Graphics technology company NVIDIA is getting into the hardware game with a portable gaming console that runs on the Android platform. It’s a little clunky-looking, but it has analysts optimistic about the future of Android-based consumer devices.

A little gimmicky, but still interesting. Haier showed off a blender that uses a power transmitter instead of a plug.

There may not be a reason for a one terabyte flash drive just yet, at least in an office. But it’s good to know the storage is available if you need it.

Samsung v Apple: does the law snuff out the magic?

Google kids have grown up, but where will they take the firm?

While I’d probably be up for the Lenovo Helix if I hadn’t already bought myself an android pad to play with recently, i really can’t understand why anyone would pay for an oven with a device stuck in it. It sort of reminds me of how irritating I find microwave ovens with a digital clock in them sucking up electricity.

Sha-Sha, I’m also struggling to see the point of the Android oven. It apparently lets you know (via your phone) that your meal is done. Why you couldn’t just set a timer or alarm on your phone, I can’t fathom.

That said, I quite like the digital clock on my microwave.

@Charlie Powles – it’s funny but I was just thinking that when digital clocks came out they put them on everything for a while there, I think the same thing is happening with smartphones.