Guy Rundle gives Paul Sheehan a history lesson over the Cronulla riots. And other media tidbits.

Harold on fire in The AFR. Victoria’s Australian of the Year Harold Mitchell had a rare day out in this morning’s Australian Financial Review, when the paper reported the Tennis Australia vice president was opposed to a new competitive bidding process for the event’s annual $21 million Channel Seven TV rights deal. Mitchell places millions of dollars a year with Seven in his other guise as executive chairman of the local arm of ad buyers Aegis Media and the five-year Seven arrangement — which the paper says he wants rolled over — has always loomed large.

In 2010 the ABC’s Four Corners program revealed Melbourne’s most powerful man had literally stood over (now resigned) Tennis West president Dean Williams before a crucial vote on Geoff Pollard’s re-election as Tennis Australia President. Williams claimed Mitchell had told him the Seven broadcast deal could be revoked if bitter Pollard rival Paul McNamee was elected instead (in a letter to Four Corners, Mitchell said he had always acted in TA’s best interests, noting he hadn’t joined the TA board until a year after the previous deal was negotiated by his firm). Interestingly, his apparent desire to roll over the deal works against Four Corners‘ suggestion of a direct conflict given Aegis could well be involved in the negotiations with other networks if the TA rights were up for grabs.

Over on page three sat another Mitchell-Seven special. Mitchell is the outgoing chairman of the thoroughbred industry-owned TV rights holder TVN, and the AFR revealed that Seven West had snagged nearly all the free-to-air broadcast rights for the sport in Australia, including the Sydney Easter carnival that includes the Golden Slipper. On Christmas Eve, five racing bodies in NSW and Victoria agreed to a new rights deal with TVN until 2028. TVN then did a subsidiary deal with Seven, with Seven CEO Tim Worner lauding TA’s “smart sports administrators”. The mind boggles … — Andrew Crook

Rundle: Sheehan wrong on Cronulla. In the debate over the new federal discrimination laws, and the multi-faceted opposition to it, you can rely on the Right … to score one own goal after another. Thus Paul Sheehan, in The Sydney Morning Herald today, tries to defend Alan Jones’s notorious “vermin” comments, that he launched about young Lebanese men, in the days before the Cronulla riots. But which Cronulla riots? Here’s Sheehan:

“After the riot, and the following violent rampage by Muslim men in convoys of cars … a  teacher at Cronulla High School told me: ”It’s so disturbing that [no one] mentioned the beatings, the provocations, the filth [by Lebanese-Australians]’ … None of this was aired at the time. The media’s story had one theme, the Shire’s white racism.”

‘Scuse me? This is absurd. In the days following the initial Cronulla “riot” — co-ordinated violent attacks by young white men, often literally draped in the flag, and led by hard-right activists (some of whom, bizarrely, flew the US Confederate flag) — it was the counter-disturbance by some Lebanese-Australians that gained most Oz airplay, even though it was smaller. It was the global media that reported what they saw: a violent white supremacist act, based on the pretext of s-xual harassment of women.

Sheehan repeats the Australian media’s focus: the initial event is simply “a riot”, barely noted, where the follow-up is “a violent rampage”. This seems to imply that the initial staged riot was non-violent, and with no “rampaging” quality. If Sheehan’s intent is to give further evidence that a racial vilification law is required to address systemic racist bias in the Australian media, he’s succeeded admirably. — Guy Rundle

Correction of the day. Better late than never. Here’s a mouth-watering correction from Friday’s Australian. 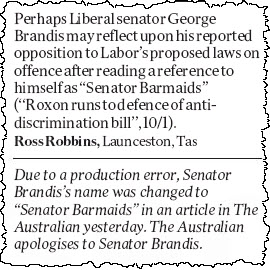 Video of the day. The Sunday Telegraph is so excited about Ellen DeGeneres’s visit down under that they roped in a choreographer to create a dance especially for the talk show host. Here’s hoping it doesn’t take off …

Front page of the day. Size does matter, contends the ever-controversial New York Post on its front page today. 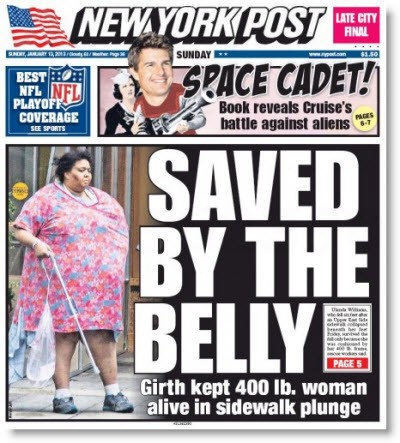 From academics to Anonymous, Swartz sets off huge reaction

Guy–You should suggest to readers my solution to the columns of Sheehan, Henderson, et al; do not read them.Save yourself the pain. Wait for next day’s letters which correct their guff and provide critiques and often some humour. Judy Prisk thought this was a publishable suggestion, regrettably the SMH Editor did not. SteveofRobbo