No time for a holiday, Guv’nor. As Tasmania cleans up from — and still fights — bushfires which have destroyed more than 100 properties, is this the time for the state’s Governor Peter Underwood to go on an overseas holiday? Acting on a tip from the public, Crikey called the governor’s secretary David Owen, who confirmed Underwood left for his holiday on Wednesday. It seems he’ll be back on January 21.

It’s not necessarily a time of important administrative work for the Governor, but by custom the role encompasses providing support and condoling with communities who are going through tough times, such as in the aftermath of natural disasters.

“Not to say that his mind is not on it,” Owen said. “If circumstances were to worsen, he could return pretty quickly — just as the Premier was able to.” Tassie Premier Lara Giddings was holidaying in Scotland when the fires struck; she returned quickly.

Do you think it’s appropriate for Underwood to holiday at this time? Peter Slipper allegedly took time out from parliamentary sitting days to have a little vacation at wineries around Canberra, while Tony Abbott postponed his holiday this week to help with volunteer firefighting. Drop us a line for our comments section or add your view below.

Who else is on holiday? Crikey asked for your gossip on which pollie has been spotted enjoying their holidays. If you spy an MP having some down time, let us know.

— Former NSW Minister Eric Roozendaal was seen “walking through Westfield Bondi Junction car park like he owned the joint”, while NSW Health Minister Jillian Skinner has been spotted enjoying a day out at the zoo with family.

Background on spin promotion. Yesterday we told you that Eamonn Fitzpatrick is taking Sean Kelly’s job as senior press sec to the PM. Is it correct that Fitzpatrick masterminded the recent Keneally and Bligh election losses?

Police corruption in a burger … Crikey has looked into the practice of fast food giants giving free stuff and discounts to cops, airing concerns by police corruption experts. It seems international research on public attitudes to minor perks for cops has not been replicated here, so we asked readers to answer a survey question, provided by University of Melbourne researcher Leslie Holmes. With 257 votes the result is in: 60% of respondents had some concern at the practice. 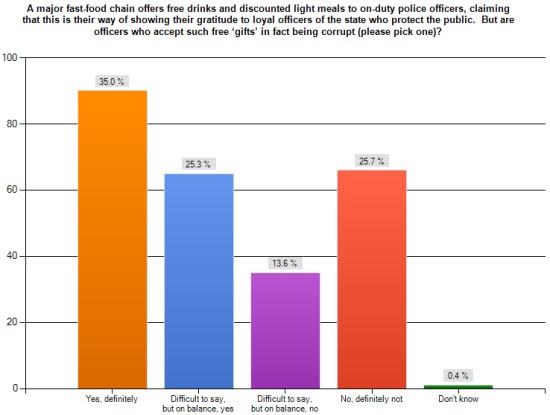 This survey was not intended to be definitive, rather to give a rough idea what Crikey readers think on the topic. Holmes said the results were fascinating and very similar to research he had conducted in Germany and Bulgaria (where just under 60% of respondents had some concerns at the practice). “The results are so similar, I wonder if there would be any real difference [if the poll was conducted among the wider public],” Holmes said. He’s seeking permission from the ARC to poll the domestic public on police corruption.

… as more tipsters discuss Macca’s perks. We’ve had some interesting responses to the story.

— “Across NSW, every out-of-home care provider, foster care agency and behavioural school is given literally books of vouchers for free Macca’s meals by their local stores to hand out as ‘rewards’ for good behaviour to the children. Many children/young people will be getting two or three a week if they do their homework and clean their room. So there’s a bunch of children and young people with serious behavioural and trauma issues having good behaviour linked to fast food for years of their lives. Brilliant marketing, terrible obesity outcomes — especially when we know the relationship between out-of-home care experiences and poverty and the links between poverty and obesity are so strong.”

— “I did my time in polyester for a place in Sydney in the ’90s, owned by the chain rather than a franchise.  Our positioning not far from two cop shops meant that we saw a fair amount of traffic from police, and the deal that was given was that if the cops weren’t charged, either in uniform or out. The managers were pretty open that it was payment in advance for prompt responses whenever they were called.  The wiser cops knew never to use the drive through and only to ever order from what they could see in the warmer in front of them.  If the order had to come to the back and the kitchen crew knew it was for the police, well … let’s just say that it gave a rare opportunity for culinary and biological experimentation in a fairly dull job.”

They call it Mello Yello. The Crikey bunker became very suspicious that the temporary renaissance of 80s thirst quencher Mello Yello (revived recently by Coca-Cola Amatil) was a ruse, and the bottles contain Lift (made by the same company). A formal office taste test was conducted yesterday and the verdict was that the products are very similar, but Mello Yello was “more mellow and less yellow”. One taster thought Mello Yello was more sickly sweet in a mouth-puckering way.

There was a vibrant office discussion around the resemblance both drinks bear to urine (if you’ve drunk more water, watch out for the Mello Yello hue, while those taking multi-vitamin supplements may see some Lift).

A Coke mole told us Mello Yello was originally developed as Coke’s answer to Mountain Dew; it’s supposed to taste somewhat of pineapples (although no pineapples were harmed in the making of it). It’s been revived to steal flavour space on the supermarket shelves from Schweppes. From the taste of it, we don’t think Mello Yello is back for good, although we endorse the recent revival of products from the distant past like Eskimo Pies.

A baptism of bushfire for young Tassie reporters