Obsessed with Tony. If a large proportion of Australian voters really don’t like Tony Abbott, I’m sure it has very little to do with what Labor Party members say about him. The judgements of the Opposition Leader will be based on his own work not someone else’s description of it. The continuing criticism hinders the […]

Obsessed with Tony. If a large proportion of Australian voters really don’t like Tony Abbott, I’m sure it has very little to do with what Labor Party members say about him. The judgements of the Opposition Leader will be based on his own work not someone else’s description of it. The continuing criticism hinders the Labor cause by creating a mood of “a pox on all your houses”.

A confusing green dotted line. Our regular sceptical climate change correspondent Tamas Calderwood will be able to extend his time scale. Earlier this week he was writing of  “no global warming for 15 years” but the British Met Office has now provided an excuse for claiming that 20 years without global warming is now predicted by one of the leading warners about a warming world.

Just before Christmas, with almost no fanfare, the Met Office published on its website a revision to one of its forecasts of how much temperatures will increase over the next few years. “Global average temperature is expected to remain between 0.28 °C and 0.59 °C (90% confidence range) above the long-term (1971-2000) average during the period 2013-2017, with values most likely to be about 0.43 °C higher than average (see blue curves in the Figure 1 below).” The earlier model had projected that the period 2012-16 would be 0.54C above that long-term average — within a range of uncertainty from 0.36-0.72C. 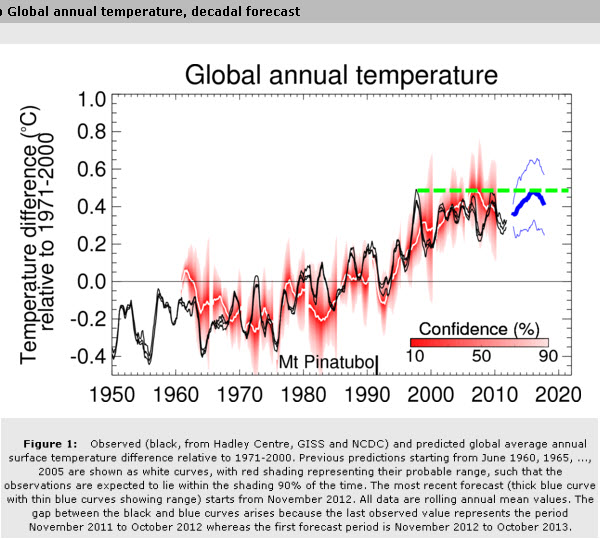 I have added on to the Met Office graph the dotted green line to how how, should the estimate prove spot-on, the global average temperature would have remained relatively static for about two decades.

At the very least a graph like that one above complicates the task of convincing the governments of the world that urgent action to deal with climate change is needed, but at least the Met Office is trying. It issued the following statement on Tuesday to put its latest estimates into context:

The latest decadal prediction suggests that global temperatures over the next five years are likely to be a little lower than predicted from the previous prediction issued in December 2011.

However, both versions are consistent in predicting that we will continue to see near-record levels of global temperatures in the next few years.

This means temperatures will remain well above the long-term average and we will continue to see temperatures like those which resulted in 2000-2009 being the warmest decade in the instrumental record dating back to 1850.

Decadal predictions are specifically designed to predict fluctuations in the climate system through knowledge of the current climate state and multi-year variability of the oceans.

Small year to year fluctuations such as those that we are seeing in the shorter term five year predictions are expected due to natural variability in the climate system, and have no sustained impact on the long term warming.

SkepticalScience covers this. Start with the excellent video if one is time short.
http://www.skepticalscience.com/resolving-met-office-confusion.html

I reckon “Labor” with this fixation of lining up, to take turns at having to point out “the bleeding obvious about Abbott” so often (just because they don’t read it in the press – their time taken up with promoting their conservative PR as they are), sends a negative message about their idea of our intelligence too?
And, while fumbling in other areas, raises doubts about their own ability to do two things at once?

Can’t you read a graph either Richard? How abut you stick to reporting and leave the interpolation to someone else. Unless you like looking stupid that is.

The trouble is, that 1998 high – an unheard-of extreme created by an extreme el Nino – is now a point we’re hitting again and again and again. It’s no longer an extreme, but the a commonplace thing. Let alone the death toll if we happen to have another el Nino like that one from this base.

(it’s also anything but standard practise to pick an extreme outlier as the starting point of a trend line. Just because other people are doing statistics wrong doesn’t make it a good idea to copy them)