The AusAID-funded program Seeds of Life is creating debate in East Timor, where some locals fear the modern systems of farming taking over the traditional organic methods. 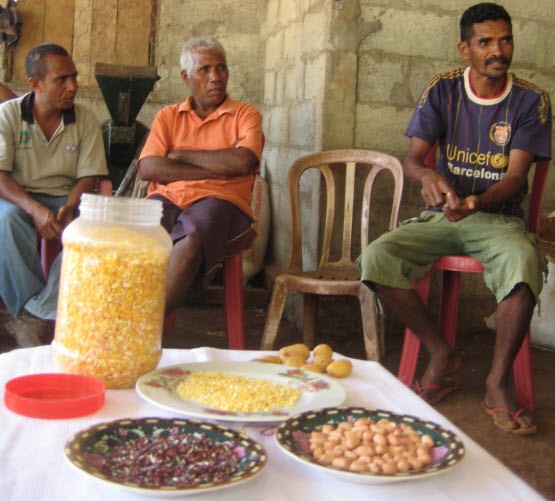 It’s the hungry season in East Timor, that time of year when food from last year’s crops has run out and the next harvest is yet to be reaped. In Guriwai in the country’s east, the farmers are passing out their corn and peanuts to a visiting group of international nutrition experts. For Guriwai at least, this year there will be no hungry season.

Guriwai’s relative wealth has many causes — cultivation methods, environmental and climatic conditions all play their part. But it’s the use of new seed varieties introduced by the AusAID-funded program Seeds of Life (SoL) that has had the most benefit.

SoL has been working since 2001 to identify high-yield varieties of East Timor’s five staple crops — corn, rice, cassava, sweet potato and peanuts — best suited to the country’s climate and establish a national seed network to keep local farmers supplied. They work to the maxim that “seed security is food security”, aiming not just to identify the varieties that will produce the highest yield but also to help farmers establish systems and networks for the production and storage of seed from those crops in the future.

Food security is a big, contentious issue in East Timor. A predominantly agrarian society, organic farming is a way of life. Agriculture provides employment for some 80% of the population; about 40% of households in the nation rely on subsistence agriculture. But it’s not always enough.

Establishing seed networks is not the only challenge facing SoL. With traditional farming methods so integral to many Timorese people and their sense of cultural identity, any hint of a move towards industrialisation, particularly when driven by powerful outsiders, is met with suspicion in some quarters.

Ego Lemos is one of East Timor’s most popular folk singers. He gained international recognition for his composition of the title song for the film Balibo, but at home his main work is as a champion of permaculture through NGO Permatil, of which he is the founder.

He has a very different vision for farmers — permaculture promotes organic, self-sustaining systems, and values the traditional knowledge of farmers over the modern, industrial approach of SoL. The focus should be on promoting diversity in crops and finding ways to improve the yield of existing varieties. “People need to learn to rely on a variety of foods based on the microclimates, based on the seasons, not just based on demand,” he said.

“They only look for how to create a lot of product. They don’t care about deep inside composition; nutrition. I think that’s wrong.”

Lemos is not alone. Remigio Vieira is the general director of the Farming Study Group, a tiny organisation that examines agricultural policy in the country and runs its own seed distribution programs, albeit on a tiny scale and focusing exclusively on the propagation of local varieties. He’s suspicious of the varieties being introduced.

“They only look for how to create a lot of product. They don’t care about deep inside composition; nutrition. I think that’s wrong. It’s good to know what the nutritional composition is. You should know,” Vieira said.

One example: he says the variety of corn introduced is too sweet and could have a high glycaemic index and lead to health problems for the people who rely on it for the majority of their diet. SoL is not able to respond — neither they nor CIMMYT, the Mexico-based non-profit that develops and shares the seed varieties, have information on the nutritional composition of the corn they are using.

There is also widespread suspicion about the provenance of the seeds being used by SoL, with many organisations raising the spectre of genetically modified and hybrid products that will ultimately leave farmers dependent on multinational corporations for their crops.

John Dalton, the Australian team leader of SoL, says there’s an at times wilful misrepresentation by the program’s critics. While some organisations have done such trials in the past, SoL does not use any of these types of seeds. In fact, Dalton points out, all seeds have to be open pollenated varieties for the program to work.

Lemos is also concerned the focus on introduced varieties will ultimately wipe out the traditional corn and sweet potato that have been growing in East Timor for centuries. Dalton argues the traditional staples used in East Timor were also introduced, albeit centuries ago. “The farmers are going to continue to use the local varieties [so] we don’t reduce the biodiversity, we actually add to it,” he said.

And as the success of the program to date shows, not all Timorese share these concerns. Dalton is confident it will hit its target of establishing 1000 informal seed production groups, and therefore reaching 50% of the country’s farmers, by the end of 2013, two years ahead of schedule.

This about more than hunger. According to the World Health Organisation, 58% of East Timorese children are suffering from stunting caused by malnourishment, putting it among the world’s worst affected nations. Given nutritionists believe stunting can also impair a person’s cognitive development, it’s a particularly damaging statistic. Some 55% of the population is below the age of 20, and with a fertility rate of almost six children per woman, this proportion will continue to grow.

Jessica Fanzo is an associate professor at the Institute of Human Nutrition at Columbia University. She is in East Timor to help advise SoL on how to incorporate a nutritionist bent into their program.

“Sixty per cent stunting is no joke, and to reverse this would take a multi-sectoral approach that involves big social issues around education, social protection and improving both the health and food system. East Timor needs to act and do so very quickly to reverse these numbers,” she said.

SoL is going part of the way to addressing the problem, but according to Dalton, they cannot do it all.

“We can look after staples, we can use our groups for education on improved nutrition, we can support other players who are working in education … [but] it’s got to be a concerted approach,” he said. However the government is already struggling to spread its budget across all of its priorities, and the agricultural sector is one of the key areas that is suffering, receiving less than 2% of budget spending.

That looks set to change over the next few years, with the Timorese government adopting a long-term strategic plan for the nation’s development coupled with a program of decentralisation which, it’s hoped, will empower the country’s districts to do more to address their individual challenges.

But for the program to be a complete success, they will have to continue to win hearts and minds as well as spreading seeds and crops.

The provenance of those SoL seeds is of concern.

AusAID? It’s worth remembering there’s no such thing as a free lunch.

“Some 55% of the population is below the age of 20, and with a fertility rate of almost six children per woman, …”

I don’t mean to glib, or to underestimate the social and political problems but unless the population growth is addressed all else is spitting in the wind.