Richard Farmer’s chunky bits: a healthy and free nation (minus the gastro)

Australia comes out close to the stop of the developed world's healthiest nations in a just published study by the US National Research Council and the Institute of Medicine. Plus other political news of the day.

Measuring the healthiest nations. Australia comes out close to the stop of the developed world’s healthiest nations in a just published study by the US National Research Council and the Institute of Medicine. The report contains an interactive chart that allows you to explore how Australia compares to 16 “peer” countries — other high-income democracies — on specific causes of death such as heart disease, HIV/AIDS, violence, and traffic accidents. These causes are grouped into three major categories: noncommunicable diseases (which cause the largest number of deaths), injuries, and communicable diseases, maternal, perinatal, and nutritional conditions. 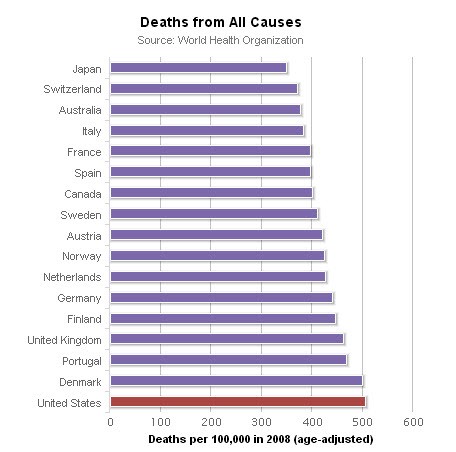 And the freest. Our cousins across the ditch come out on top but Australia comes out well too in an attempt by Canada’s Fraser Institute to rank countries according to personal and economic freedom. Sydney finds international fame again. Delighted to see that the capital of New South Wales is again being recognised internationally. A new strain of norovirus responsible for the majority of recent vomiting and diarrhoea cases in England and Wales has been named “Sydney 2012” by the UK’s Health Protection Agency.

A colourful candidate. It would be fun to see Vladimir Franz alongside world leaders in one of those official conference photos but alas the pollsters only have him in third place on 11% of the vote as the election of a new Czech president approaches. Ninety percent of the body of the independent candidate is covered with tattoo body art.

Unfortunately I cannot find a market from which to prepare a Crikey Election Indicator for the Czech event but here is an opening one on the forthcoming Italian election: A question of balance. No super glue, no hidden velcro. This is sculpture of balance courtesy of National Public Radio in the US. So how is it done? See for yourself: “Beppe Grillo” wasn’t he one of the Marxist brothers?