Drama at the Southern Weekend, the outspoken newspaper whose editorial staff went on an unprecedented strike due to propaganda-chief meddling earlier this week, continues to ripple outwards. Plus other media news of the day.

Update from China: Southern Weekend latest. Drama at the Southern Weekend, the outspoken newspaper whose editorial staff went on an unprecedented strike due to propaganda-chief meddling earlier this week, continues to ripple outwards. Protests at the newspaper continued for a second day, and there were some reports that the paper had been shut down. Reporters later struck a deal to return to work after Guangdong’s provincial chief, Hu Chunhua, mediated negotiations between propaganda authorities and staff.

The Chinese propaganda department’s deft command of farce was on full display in the form of an official directive released yesterday, which referred to this week’s events as a “mishap” and ordered newspapers to “prominently” publish a Global Times editorial that puckered up to the bastardised, bowdlerised version of Southern Weekend’s New Year’s editorial. Some papers ran it, albeit reluctantly; the Beijing News publisher resigned after propaganda authorities overturned his original refusal. Other publications opted for subtle dissension, hiding messages of support in plain sight. 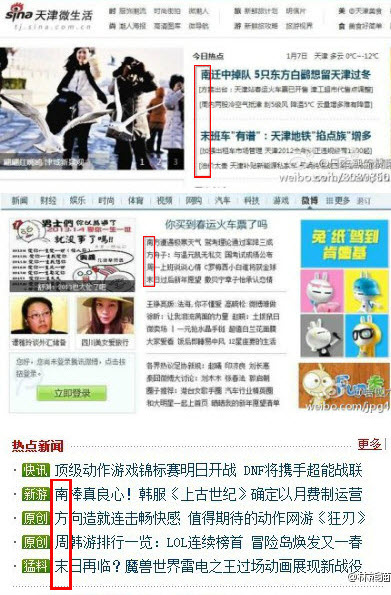 A productive week for censors has also seen Brad Pitt taste their hatchet, as a post on his newly opened Weibo account stating that he was coming to the country was apparently deleted. Pitt has been banned from the country since the release of his 1997 film Seven Years in Tibet. China’s propaganda department did not confirm or deny to Crikey that this because watching the movie felt like enduring the titular period in real time. — Kway Teow in Beijing

Department of Corrections. Sure, this isn’t an official correction, but we still think these tweets by Matthew Fort, The Guardian‘s long-time food and drink editor, are worth being repeated.

Front page of the day. This photo of a Tasmania family hiding under a jetty to avoid the bushfires, sure to become one of the defining photos of 2013, appeared on the front page of International Herald Tribune, the global edition of The New York Times. China shows what it thinks about a free press

I was a China Daily censor

From now on can this be the answer whenever Tamas Calderwood writes in: