Planning a resource rent tax? The threat by Australian miners to take their business elsewhere if a fair dinkum resource rent tax was introduced is looking a bit hollower following recent developments in South Africa. In return for resisting plans from some parts of its membership to start nationalising the mining industry, the governing African National Congress is planning taxation increases.

The SA economic transformation policy commission co-chairman Enoch Godongwana says no decision has yet been made on the way the tax take will be increased:

“Resource tax is included as an option but there will be a tax. What form that tax will take is a matter of detail. We may increase royalties or move for a resource rent and reduce royalties.”

Governments making job market tougher. The impact of the scurrying by governments federal and state to reduce budget deficits shows up clearly in the job vacancy figures released this morning by the Australian Bureau of Statistics. An overall fall in vacancies from November 2011 to November 2012 of 6.8% was made up of a 4.4% fall in the private sector and a 29.5% public sector decline.

A practical practicing politician! Who said Prime Ministers are incapable of helping solve the real problems of their people? My colleague Bob Gosford reckons the recent actions of Timor Leste’s Xanana Gusmao is the “political good news piece of year (so far) for mine”. From the New York Daily News: 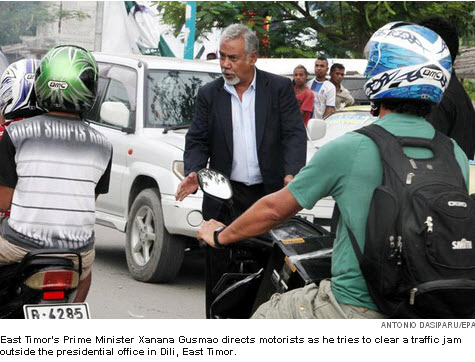 Everything old is new again. I have vague memories of days when a stranger known as “the inspector” settled down at the back of my class at Hobart’s Macquarie Street primary school to look and listen as my teachers went about their business. Just part of checking up that we were being well taught was how it was explained. And now, it seems, this practical way of evaluating teacher quality is coming back into fashion.

In the December 2012 issue of the American Economic Review, Eric S. Taylor and John H. Tyler offer actual real-world evidence on “The Effect of Evaluation on Teacher Performance”. Their evaluation involved observation of actual classroom teaching and one finding was that student performance not only went up during the year that the evaluation happened, but student performance stayed higher for teachers who had been evaluated in previous years.

The article itself is behind a paywall but there is a summary of it on the Conversable Economist website:

“The estimates presented here—greater teacher productivity as measured by student achievement gains in years following TES evaluation—strongly suggest that teachers develop skill or otherwise change their behavior in a lasting manner as a result of undergoing subjective performance evaluation in the TES system. Imagine two students taught by the same teacher in different years who both begin the year at the fiftieth percentile of math achievement. The student taught after the teacher went through comprehensive TES evaluation would score about 4.5 percentile points higher at the end of the year than the student taught before the teacher went through the evaluation. … Indeed, our estimates indicate that postevaluation improvements in performance were largest for teachers whose performance was weakest prior to evaluation, suggesting that teacher evaluation may be an effective professional development tool.”

Waiting for Rupert’s tweet. Have We Lost the War on Drugs? After more than four decades of a failed experiment, the human cost has become too high, says an article in the Wall Street Journal. It argues it is time to consider the decriminalisation of drug use and the drug market — heroin, and meth, and crack, and other hard drugs as well.

Why has the government hidden a budget increase in foreign aid? ﻿