Credlin a ‘reluctant’ but savvy star in Abbott’s female strategy

Were Peta Credlin's media interviews about her IVF issues really part of a deliberate strategy by the Tony Abbott camp to woo female voters? Yes and no, Crikey can reveal.

Political advisers rarely give on-the-record interviews. But was Peta Credlin’s Marie Claire chat — and subsequent follow-up in the News Limited tabloids, reigniting a debate on Tony Abbott’s views on female issues and IVF treatment — part of a deliberate strategy to woo voters? Yes … and no.

“They approached us,” Marie Claire editor and publisher Jackie Frank told Crikey as the magazine hit newsagents today. But a Credlin interview wasn’t what the Liberals had in mind — that was “serendipitous” timing, the high-profile editor reveals.

Late last year Julia Gillard and a cohort of Labor female ministers were interviewed by Frank for an eight-page glossy spread in the Lodge (the one where Gillard quipped “I’m taking badass as a compliment” after Jezebel dubbed her “one badass motherfucker” for her misogyny speech).

In response, Abbott media adviser Jude Donnelly gave Marie Claire a call. Donnelly, a former Howard government and AFL spinner, was hired by the Coalition last year to draft a female-friendly campaign and “in part, to handle media relations for ‘Margie and the girls'”, as The Sydney Morning Herald‘s Lenore Taylor reported last October.

Frank told Donnelly Marie Claire wasn’t interested in a story on Liberal MPs, but they already had Credlin earmarked for an article about 10 successful women in different fields under 45 and wanted to know if she’d be involved. Frank says Donnelly replied: “Well alright, we weren’t thinking of that but we’ll put it to her.” 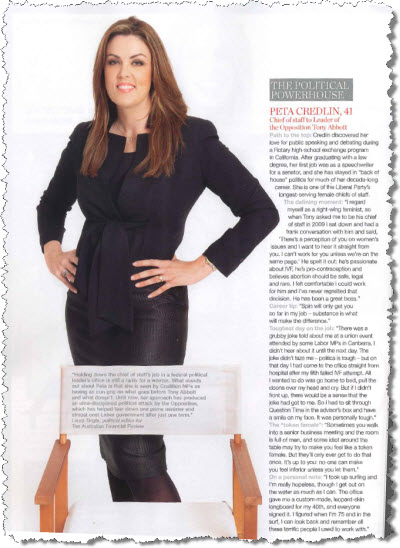 In the article Credlin calls herself “a right-wing feminist” and talks about how she sat Abbott down to discuss his views on women’s issues when she was offered the CoS gig in 2009. Her “career tip” is that “spin will only get you so far in my job — substance is what will make the difference”, and she says sometimes in meetings full of men “some idiot” will try and make her feel like the token female. She also reveals her hardest day at work was the day after the dodgy joke at the CMFEU conference, when she had to front question time with a smile after finding out her fifth attempt at IVF had been unsuccessful.

Does Frank think she was used? “We’re apolitical,” she said, noting the Abbott camp couldn’t have foreseen they’d been planning a Credlin interview but obviously wanted to get involved with the high-profile mag. “I suppose Tony Abbott took an opportunity,” she said.

After hearing Credlin had chatted with the fashion glossy, News Ltd Sunday tabloids political editor Samantha Maiden got in touch with Marie Claire‘s publicist and was given an advanced copy of the story. Maiden then requested her own interview with Credlin. She also emailed Abbott’s office a number of quotes he’d made previously regarding IVF, contraception and abortion and asked him to pen an op-ed about his current feelings (the column appeared alongside the Credlin interview on Sunday).

Credlin agreed to meet up for a coffee, but Maiden says she appeared “reluctant and cautious about going on the record” and it only became clear towards the end of the interview she would allow any comments to be published. News Ltd papers splashed big with the story on Sunday, sparking fierce and often cynical debate on social media.

“My impression of Peta Credlin is someone who has had quite a traumatic experience with IVF,” Maiden told Crikey. “To attack her about being honest about the fact that she wanted to have a baby and it hasn’t happened is pretty heartless. She might be Abbott’s chief of staff, but she’s a human being.”

But Maiden is wise to the fact Credlin is speaking to the media for her own reasons. “There’s clearly a political point to what she’s doing, that she feels quite genuinely that people have got the wrong idea about Tony Abbott and he’s not as black and white on these issue as people think… If Peta Credlin wants to talk about this stuff, I’m not going to go up to her and put my hand over her mouth,” she said.

Yes Credlin’s story is genuine and the opportunity was fortunate but doe anyone really think that after approaching Marie Claire to try to get a “Tony is really warm and fuzzy” article and only being offered a spot for Credlin that Abbott, Credlin and any other big wig in the Lieral party didn’t workshop what would be said and how it was said.
Just look at what was said “spin will only get you so far in my job — substance is what will make the difference” which fits well into the Liberals story of “the ALP is all spin and Tony is a man of substance”, “She also reveals her hardest day at work was the day after the dodgy joke at the CMFEU conference” again the Liberal party line of “those unions are really bad”, “she says sometimes in meetings full of men “some idiot” will try and make her feel like the token female.” but not my Tony and then of course the “Tony let me keep my drugs in his fridge and is misunderstood”.
Of course a terrible boss could have forced Credlin to keep her drugs in the office fridge so she didn’t have to be wasting work time going back and forth.

It is also weird that anybody who points out that TOny has been on the record making statements that contradict Credlins view have been attacked for being insensitive to Credlins plight when the 2 things are not mutually exlusive, you can feel for Credlin as a person but still see she is shovelling sh t about her boss for poltical reasons.

The thing is who cares about Credlin.

They hire a man to implement a female-friendly Abbott campain. OK….

Peta Credlin is paid to make Tony Abbott look good. She is the animal called a ‘Spin Doctor’ after all so she is just doing her job. Of course she is disingenuous, if she were working for the Labor Party she would be working just as hard to make him look bad. She gets paid to say this rubbish as she is a ‘Spin Doctor’. What do ‘Spin doctors’ do, they spin half truths and lies so they are palatable to the general public. John Howard had some real experts spinning bullshit full time, Tampa, Children Overboard “I didn’t know!” What a load of Cockyshit! this is just the new way to do it, get a woman who gets paid something in the range of $250,000 to $500,000 per year to spin what a lovely bloke blokey Tony really is. When the truth is he is a fundamentalist catholic who believes Abortion, birth control, mini skirts, stem cell research should all be banned. He also believes once a woman is married she should be at home looking after the kids and doing the housework. He is a throw back to the fifties just like his mate Howard.

So this tells us Abbott is a ‘conviction politician’ who changes his word to suit the situation, even in the face of his faith’s stated views on issues.