The Whitehaven Coal stunt mines a rich vein of environmental hoax activism. Crikey searched the archives to come up with a top ten list of stunts.

With the former feet-on-the-streets mentality of deep green social movements now going the way of the keyboard, the hoax has become a formidable tool in the political armoury of post-industrial warriors who’ve found they can jam the gears of carbonated capitalism with their smartphones and a laptop.

Much of the media — including Fairfax’s metro mastheads and The Australian Financial Review website — were immediately sucked in by the Whitehaven ruse and were forced to backtrack with embarrassing “how we were dudded” yarns (but not before the wily operators at Chris Mitchell’s Australian had screen-grabbed the devastating evidence).

After owning up, Moylan name-checked US culture-jamming activists the Yes Men and ABC TV’s Chaser “boys” to explain his tactics, which led to $270 million being cleaved off the Whitehaven share price before market sheep discovered the error of their ways and restored the stock to its former glory.

The initiative taps into a rich vein of global hoax activism that Crikey decided to rank in order of illness. A popular recent maneuver is the “false positive” — where activists put out a devious and fake press release claiming a fossil fuel behemoth is about to do something positive, which forces the company to issue a statement denying their progressivism.

On BBC News a fake spokesman for Dow Chemicals claimed the company had finally accepted full responsibility for the 1984 Union Carbide disaster that led on some estimates to 16,000 deaths in the Indian town of Bhopal.

Anti-logging activists drew attention to the company’s love affair with dodgy flatpack tables and chairs by putting out a fake presser claiming it would replace furniture and flooring from native forests with plantation grown furniture ranges by June 2012. Other activists later tagged in-store furniture with fake contest QR codes that linked to an anti-logging site. The real spokesman for Harvey Norman was not amused. 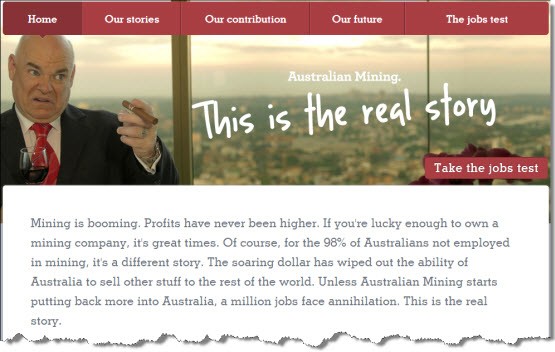 The US arm of Greenpeace made waves last year over a campaign purportedly emanating from Shell that painted the melting of the Arctic as an “opportunity” for the company, complete with a polar bear struggling to make frozen land. The  original “viral” video generated a #shellfail hashtag on Twitter. Then, the group staged a fake “farewell” for Shell’s drilling rigs at Seattle’s Space Needle which were docked in Seattle at the time. With energy big wigs looking on, a ceremonial spigot-turning resulted in an undercover Occupy activist being sprayed in the face with black gold. In 2011 a Coal Cares website — complete with an offer of free Asthma inhalers — cropped up, aimed at US energy giant Peabody. The site was a collaboration between Yes Men development bunker the Yes Lab and a group tastefully called Coal is Killing Kids. Last July, a fake group of members of the Flat Earth Society turned up to a meeting of climate sceptics — the Climate Science Education Trust in Aotearoa/New Zealand/Middle Earth. Their letter of intent was signed by “Nathaniel Pipe-Blower, Tzar and 33rd degree Grand Wizard Master of the first inverted pancake lodge of the totally awesome Flat Earth Society Ltd”.

UK activist journalists posed as staff members of an international arms organisation to expose Conservation International as a “conservation” organisation which exists almost entirely to provide good green PR to any company who asks for it. CI — which has close links to Cargill, Chevron, Monsanto and Shell — turned a deep shade of red when the ruse was revealed.

In 2009 the besuited Yes Men renegades produced a fake issue and website of the New York Post with the headline “We’re Screwed”, in reference to the coming disastrous impacts of climate change. Three years later, the Post‘s distribution area was duly devastated by Hurricane Sandy.

Not a hoax per se, but last month anti-coal seam gas activists dressed up as zombies and invaded the current APT7 exhibition at the feted Queensland Gallery of Modern Art. A main sponsor of the exhibition is frackers Santos.

In 2010, anti-plane activists Manchester Plane let off helium balloons attached to r-pe alarms reading “Happy Retirement” and let them float to the top of an airline industry conference venue.

In 2011, US greenie Tim DeChristopher made fake bids for Utah oil and gas energy leases in an effort to sabotage the auction process. He was later jailed for two years.

*Remember a better one? Email your favourite enviro-stunt to [email protected] and we’ll keep the list updated. Thanks to Graham Readfearn for some of these.

Gladthat Crikey see this as a great stunt I am sure the small investors who lost their money wouldn’t be so generous!!

And what exactly did the “best environmental hoax” achieve? No long term damge to the company, I haven’t seen anyone mention the exact point he was trying to make, even the big institutional investors, those that finance the supposed environmental damage, wouldn’t have lost much as they would have been able to verify the report much quicker than the average Joe.

The only thing I see it achieving is wiping a few thousand from the SMSF’s of ordinary Australians and self funded retiree’s.

I predict that Mr Moylan will be prosecuted by ASIC and sued for damages by sundry investors and traders. Wonder if he will still be smiling then.

Stefan – True he will probably get a fine from ASIC and be forced to pay damages but I dare say he has no assets so he won’t actually pay anything.

Considering that he had no intent to make money from his activities I’d be interested in how you think sentencing which lead to a jail term would be just. His lawyers could readily point to comparable activities by corporate directors which resulted in considerable unearned payments but didn’t result in jail.

I also don’t understand the “small investors” point. They wouldn’t have been effected at all. It takes more than a day for “Mom and Pop” investors to respond to share price changes.

GDT – “I also don’t understand the “small investors” point. They wouldn’t have been effected at all. It takes more than a day for “Mom and Pop” investors to respond to share price changes.” That’s just rubbish – a lot of small investors walk around with commsec on their Ipads these days, if you were a small investor and had money in Whitehaven you would be monitoring things pretty closely at the minute with all the issues surrounding it.

As I said institutions would of had the capacity to confirm the accuracy of the reports pretty quick and could quite well have ended up making money out of the saga , ie started buying on the way down. It would of been the smaller investors who got just enough information to be ill informed that lost the most.