When the censor writes the editorial: how China responded

In an ominous sign of what might be to come from China's new leadership, ham-fisted censorship of a newspaper editorial has led to a strike, protests on the street and outrage online, writes Beijing-based Kway Teow.

Xi Jinping had it all worked out. The new Chinese leader had wielded understatement like a scalpel — rhetoric was slashed, and promises were made to enforce the constitution — in a low-key beginning to his time in power that seemed designed to avoid high-profile incidences of dissatisfaction and protest. But one rumbled online over the weekend and into the streets on Monday.

Yesterday, hundreds of people assembled outside the offices of the Southern Weekend, regarded as one of China’s most outspoken newspapers, to rail against a serious violation of the newspaper’s editorial ethics and show solidarity with striking journalists. The strike and the protests that followed represent one of the most visible battles for freedom of speech in decades, one that has sparked outrage among local media, students and intellectuals — and amazement from many onlookers.

Police in Guangzhou, where the Southern Weekend head office is based, observed the protests but largely did not interfere. Protesters held small signs and yellow chrysanthemums, a flower commonly associated with Chinese funerals, this time mourning the death of press freedom.

Thunderclouds began to brew last week at the Southern Weekend when the paper’s journalists arrived at work expecting to see their usual New Year editorial. In typical style, the address originally contained a call to realise constitutionalism in China, allowing citizens to openly criticise those in power — seemingly in keeping with Xi’s promises. Instead they found these calls for democracy removed, and in their place was an error-strewn pro-Communist Party puff piece allegedly penned by the paper’s propaganda chief, Tuo Zhen.

Initial reports say Tuo, previously a vice-president at China’s state news agency Xinhua, had objections to the original editorial. Dissatisfied with editors’ amendments, he then proceeded to neuter it without the knowledge of the page editor. The China Media Project has images of the various pieces as well as a translation.

“This was an unprecedented level of interference even for China, where most media outlets must have a propaganda department to make sure what appears on the page is in keeping with orders from the government.”

Some sources now say Tuo was not at work when the incident occurred, but one thing is certain — this was an unprecedented level of interference even for China, where most media outlets must have a propaganda department with the authority to make sure what appears on the page is pleasing to and in keeping with orders from the government.

Unamused, Southern Weekend’s journalists penned an open letter to the public accusing the propaganda office of “raping” the paper’s editorial autonomy and pointing out the various errors the replacement piece contained.

On the weekend, various social media networks were abuzz as censors moved to ban the relevant discussion topics. On Weibo, the search terms “Southern” and “Weekly” were banned; it was pointed out that this was the equivalent of banning the words “New”, “York” and “Times” on Twitter.

Southern Weekend‘s main Weibo account released a notice saying the revised piece was planned and “related online rumours are untrue”; but, minutes earlier, the employee responsible for the account had posted that he had turned over the password to censors.

Journalists who had used microblogs to discuss the incident had their access restricted, and the paper’s various sections used their separate Weibo accounts to confirm these accounts, only to be shut down one by one. These actions spurred almost 100 editorial staff to go on strike yesterday.

Academics and university students have been vocal in their support for Southern Weekend, and the turnout in front of the newspaper’s offices suggests the public feels the same way. Also of note has been the subtle reaction from many Chinese companies, such as Taobao — a post on the online retail’s official Weibo account read: “There is no winter that cannot be overcome. At this moment, the swallows are flying south.” 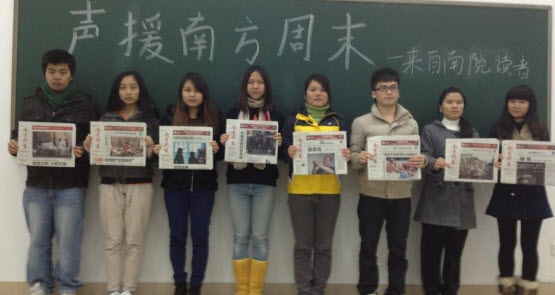 It did not pay to discuss the constitution last week, as the historical journal Yanhuang Chunqiu had its website shut down after running a cover story calling for political reform and constitutional governance. And Southern Weekend has run afoul of authorities before; in 2001, Chinese authorities removed the paper’s editors after it reported on a series of scandals.

The location of yesterday’s protests is significant. Guangdong is where China’s “reform and opening-up” movement took root in the late 1970s, and the city was the site of Xi’s first official trip upon becoming party leader. The newly reshuffled Chinese leadership’s response will be watched by many. Never mind the official proclamations, it is this reaction that may set the tone for the next decade.

Trump-inspired chaos is a boon for another authoritarian president