What’s in Tony Jones’ pay packet, and whether you should know

The ABC is fighting hard to block an FOI request to reveal the salaries of some of its best-known presenters. Crikey asks Aunty insiders whether the public should have the right to know what they're paid. 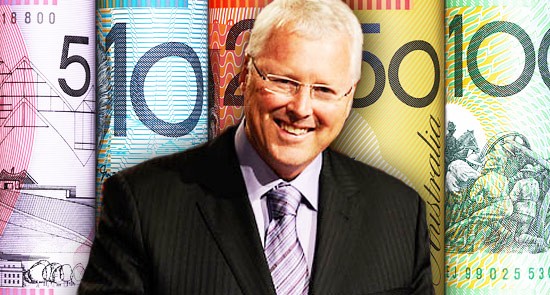 Former ABC managing director David Hill has backed calls for the salaries of the broadcaster’s presenters to be made public — a move many staffers oppose as an unnecessary invasion of privacy.

ABC insiders also suspect revealing staffers’ pay packets would pit colleagues against each other, leading to demands for wage rises that could further strain the broadcaster’s already stretched budget.

The Australian yesterday reported the ABC has lost a second appeal in its bid to block a freedom of information application by Melbourne’s Herald Sun for access to the salary levels of presenters and producers on 13 ABC programs. These include Media Watch, Four Corners and ABC Radio presenter Jon Faine.

Hill, ABC chief from 1987 to 1995, says he opposed efforts to make staff members’ salaries public while leading the organisation but has now changed his mind.

“At the end of the day it’s taxpayers’ money and the taxpayers have a right to know where it’s going,” Hill told Crikey. “It’s about the principle of transparency.”

Hill says the ABC should honour all existing confidentiality agreements but make clear in future negotiations that wage levels will be public knowledge. Although Hill believes News Limited is running an agenda against the ABC, he said: “It should just be done and then it wouldn’t have to be this big an issue.”

Media Watch host Jonathan Holmes, however, sees no public interest in revealing what ABC staffers get paid. “I think it’s unnecessarily intrusive and I don’t see what it’s trying to prove,” he told Crikey.

“If they have reasonable grounds for suspecting the ABC is absurdly overpaying people then there might be a case for it. Otherwise it’s just a fishing expedition and I don’t see any justification for it … I’m suspicious of News Limited’s motives.”

“I negotiated my salary in what I thought were confidential conditions. My colleagues don’t know what I get paid and I don’t see why the public should. It’s up to the ABC to manage its budget as well as it can,” he said.

“If the courts decide this is public information then it will be released and there’s nothing we can do about it, but I’d prefer it to be kept private as I’m sure 98% of Australians would. We will accept it with as good grace as we can and we’ll see what News Limited make of it. My prediction is they’ll make it seem we’re absurdly overpaid and that would make it a less attractive place to work.”

A finding against the ABC could also lead to similar demands at SBS. “There’s no reason why, if people know what Tony Jones gets paid, they wouldn’t want to know what Jenny Brockie gets paid,” Holmes said.

A Four Corners reporter, who asked to remain anonymous, told Crikey they would support salaries being made public as it would show how “erratic” the ABC’s pay scales are at a senior level.

“The problem for the ABC is that people will start to say, ‘why am I getting paid this amount of money when I’m doing better stories [than someone with a higher salary]?'” they said. “There’ll be a lot of pressure on management to justify why someone didn’t get a pay rise when someone else is on a lot more … the petty jealousy it would unleash would be very amusing.”

According to this ABC veteran, journalists on Four Corners are paid in the range of $140-160,000 a year, while high-profile presenters such as Annabel Crabb can command over $200,000. As a rule, however, ABC staffers are paid less than their high-profile counterparts in commercial television, many of whom earn over $500,000 a year.

ABC managing director Mark Scott — who took home an annual salary of $773,787 last year, according to the ABC’s latest annual report — has previously argued the public broadcaster pays significantly less than its commercial rivals and that revealing presenter salaries would place it at a “singular disadvantage” in retaining talent. In 2009, Scott told a Senate estimates committee that “our journalists would be the only journalists and our on-air talent would be the only on-air talent in the country whose remuneration was publicly disclosed, thereby allowing our competitors to come and cherry-pick the talent as they see fit”.

The ABC has a little under a month to lodge an appeal to the Administrative Appeals Tribunal’s latest decision on the Herald Sun’s application.

A spokesman for the Media, Entertainment and Arts Alliance said the union was unable to comment on the issue at this time.

I reckon it should be as public as the pay of the rest of the media in which they all work.

Hell yes make it public. A Crabbe paid anything at all is gobsmacking! Political editor indeed! Not a journalists bootlace. Sycophantic opinionist and cooking show hostess with No insight whatsoever.

Forgot to worst offender Mark Scott, the destroyer of an free and fearless media, now we know what he gets paid should be sacked immediately as turned ABC into minnie me Murdoch, dumbing down of public debate and using rubbish lies from LNP without question as to veracity. No media should be allowed present known lies as fact.

Pretty standard practice for the right to try and dismantle or destroy anything they don’t like, especially anything that challenges their position; (see T Abbott and the SRC, the bloodnut fishwife and her political party and supporters and just about anything else he touches).
This fits snugly with wealthy private citizens taking over the remaining 25% of the press they do not already own, and ensuring an unbalanced,unopposed independent view of the opposition while presenting the opposite view of the government.
The irony here of course is A Jones has surrounded himself with the putrescent fat lady from the circus and howards own “crazy johns” phone salesman to assist in “balanced” intercourse. we are all doomed.

Maybe the ABC should promise do so if the major parties reveal the salaries for their staffers as well. I’d like to see some of those numbers.