Hard sell at DJs. This from a retail mole:

“To supplement their pay, staff at David Jones can work towards a bonus each month. This is based not only on sales figures, but also on getting somebody to sign up for the DJ’s credit card. So if you sell over your budget, but don’t get anybody to take up the credit card — bye bye bonus. Questionable morals involved in forcing retail staff to sell credit (including young staff members). If you happen to get lucky and get a credit card ‘sale’ towards the end of the month and you’ve exceeded your budget, they’re just as likely to tell you it’s too late in the month and the credit card ‘sale’ will roll over to next month. Surely that’s just illegal. Everybody knows retail is tough, but perhaps if they focused on their core business then things might not be as bad as they seem.”

Tips is interested in whether or not salespeople are qualified to sign people up for credit cards. Russell Zimmerman from the Australian Retailers Association told us he knows that one of the major Australian retailers has recently moved away from this policy. Zimmerman said he doesn’t see a problem with staff offering customers store credit cards, as long as they’re under no undue pressure to do so.

The National Consumer Credit Protection Act 2009 says credit providers must not suggest to or assist customers in applying for credit from a particular provider. DJs declined to comment to Crikey when asked about their staff bonus policy. Know any more tales of the hard sell from the brutal world of retail? Drop us a line.

Emergency services hard at work. Nice to know that our ambos and police officers are spending time endorsing McDonald’s while in their uniforms. A reader drew our attention to the ad below, which includes people in navy ambulance uniforms, and spunky police officers in their blue kit, all having a great time sucking down drinks etc. 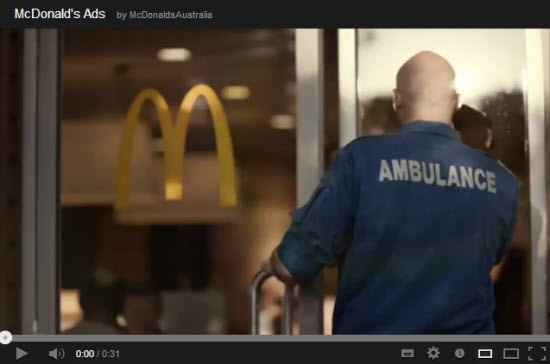 Tips had a good look at the ad, which has aired on TV, yesterday — it’s now listed on Youtube as private. Our McDonald’s tipster wanted to know if the company had permission to use the uniforms. Is it correct that ambos and police now endorse the fast food behemoth? We asked a company spokeswoman, who said “they’re just generic uniforms that we hired from a costume shop, they are not official uniforms”. No permission was sought from authorities because the uniforms were not real. “We’re definitely not saying that ambos and police endorse Macca’s,” the spokeswoman said. Of course — why would Crikey run away with such a crazy idea, that having cops in uniform enjoying fast food implies some kind of endorsement? Silly us!

We’d also like to note that despite the company declaring it’s called Macca’s for the month (which Gawker had a good laugh at), Crikey is going to call it McDonald’s, in the vain hope this may annoy the company.

Tips understands that in Victoria, cops in uniform get 50% off at McDonald’s. Know more about sweet little deals behind the fast food giant and our emergency services? Fill us in — and you can stay anonymous.

Read all about it. The terrible bushfires which have ripped through Tasmania’s south-east have left many without homes, possessions, or even a school. The Dunalley/Tasman Peninsula is a region that has struggled economically, and relies heavily on tourists on their way to Port Arthur, dive trips and the National Parks on the Peninsula (it remains to be seen how the tourist trade will be affected). If you’d like to help the region rebuild, Hobart’s well-known Fullers Bookshop is collecting books to restock the Dunalley Primary School library (the school burnt down). Second-hand books suitable for primary school kids can be left at Fullers in Hobart or Launceston, and mainlanders can buy gift vouchers for the school (which can buy the books from Fullers at cost). Fullers told us about 250 books had been received so far, and several hundred dollars of vouchers had been bought.

Pollie spotting. Terry Towelling, Crikey’s erstwhile political pundit currently towing the Jayco down the Great Ocean Road, has suggested a spot of summer wildlife spotting. “In the great tradition of the Howard’s in hammocks at Hawk’s Nest and Menzies on the Mornington Peninsula, could we put out a call to holidaying Crikey readers to send in their summer holiday pollie-watch tips?”

Now, we know that hippie PM of ours had some down time around Christmas, including a stint at Queensland’s Woodford Folk Festival. And we know Tasmanian Premier picked an unfortunate time to take holidays in Scotland — Lara Giddings had to race back to deal with the bushfires. Surely Tony Abbott is taking time out to swim some iron man races? If you’ve spotted a pollie enjoying a well-earned break recently, keep us in the loop. Just one thing though; holidaying politicians should steer clear of Point Nepean if they’re after a swim …

A number of Young Labor members have also been frustrated that reunification with the ShortCons has continued to stall given the antics of de Bruyn and Maxfield in the upcoming AYL and VYL conferences. Young Labor Unity faction convenor Patrick Sheehan was asked to step down a week during the last state parliamentary sitting week of the year on the advice of a number of factional powerbrokers including Flemington rabble-rouser Rick Garotti, Samet Istar and Labor Unity factional secretary Raff Ciccone. Patrick subsequently agreed to resign and a ballot was conducted a week before Christmas. Only one nomination was received, from Xavier Smith, who was elected unopposed.

A baptism of bushfire for young Tassie reporters

The ALP is becoming incredibly boring with all this factional rubbish – and seriously, does the party really need another de Bruyn? One is enough!
Are any of these people interested in policy and doing things for the broader community or is it just the acquisition of power for the sake of it?