The great escape: a slow release to the wild in Malaysia

It was a daring escape: freeing a trapped slow loris -- a doe-eyed creature from Borneo's forests -- from under the nose of its captives. Andrew Dodd and Christine Horn grabbed the primate and ran. Surely Dr Seuss dreamt up the slow loris. It’s a creature that looks like a miniature sloth. It moves through the jungle canopy with an exaggerated lope and it has round dreamy eyes. Who on earth would want to lock one up in a tiny cage?

This is a story about intervening in conservation. As you’ll see, it’s full of dilemmas. We were in Borneo researching a series of stories; we did not expect to get involved like this. Hopefully we did the right thing but in truth we can’t be sure. What would you do if, like us, you came across two slow lorises huddled together in a cage two-thirds the size of a milk crate?

The law in the Malaysian state of Sarawak says no one can catch, kill, keep or eat these creatures, but in this small village — like so many others — these rules are not enforced.

The slow lorises watched us through the mesh, occasionally hiding their faces as if they were only able to take us in small doses. It was distressing to see them in such cramped conditions. As we walked away we discussed what, if anything, could be done and fairly quickly the idea formed that we could buy them and release them. It was a powerful idea and a seemingly simple one.

Would more animals be caught for sale if the villagers realised there was money to be made from bleeding heart Westerners like us? We might prompt a mini trade in the animals by creating a demand if the locals knew we were prepared to pay to liberate them. The local woman told us that if we bought them and released them locally they would just be recaptured and imprisoned again to taunt the next visitors to the village.

She came up with a plan. She would ask her mother to go and buy them from the hunter. Her mother would explain that she wanted to release them near the family’s guest house. This was plausible because there was already one slow loris living in the trees who occasionally came down to eat bananas on a platform near the dining room.

Her mother would not tell the hunter about us and our motives. There was another reason for this: we didn’t want him to boost the price the local people would pay — about 30 ringgit, or $10 Australian, for each animal.

The next morning at breakfast the cage had been delivered and the deal had been done. Overnight, we had become the owners of two protected, semi-endangered and extremely cute creatures.

We squeezed a banana through the top of the cage and put a container of sweet condensed milk inside. We watched as they climbed over one another, as if both of them were trying to hide behind the other because obscuring their faces somehow made their plight more bearable.

But now, what would we do with the two? Clearly keeping two slow lorises was not an option, although we knew that it would be dangerous to get any more attached to them. We could see ourselves becoming beguiled by those big doey eyes. Mind you, slow lorises are not all soft and cuddly. They can turn vicious when personally threatened and have venom glands on their elbows. One of the villagers had been “bitten” and he told us his wound had become septic. He no longer liked slow lorises.

Our challenge was to find a way give the two creatures the best chance of a decent, free and long life. This is a real challenge in Sarawak, where the laws on forest conservation and animal protection — as weak as they are — are routinely flouted and virtually never enforced. No one we met could cite a single case of a poacher being penalised. As a consequence, illegal hunting of protected species is rife.

We could release them in the forest on the way back to the Sarawak capital of Kuching, suggested our friend. There are some reasonably dense secondary — or previously logged — forests in the south west corner of the state. But as we couldn’t know the local conditions, especially the hunting patterns of the various villages in those areas, we couldn’t guarantee the animals’ safety.

Then came the idea: what about the orangutan Sactuary near Kuching? It was one of the local villagers who suggested it because, as she said, it is one of the very few places where we could be sure that the wildlife isn’t hunted.

The Semenggoh nature reserve seems like a theme park at the entrance. With a towel covering the cage on the back seat of the car, we asked the man selling tickets whether there are any slow lorises in the park. “Yes,” he assured us, “but you won’t see them in the trees”. In any case, they only come out at night.

We had decided not to hand the slow lorises to the park authorities because we feared they would be passed on to a zoo. We drove in, past dozens of parked cars along the narrow road to a car park where we stopped on the edge nearest the forest. The crowds had arrived in the park for the daily 3pm feeding when the orangutans swing in from ropes high above the road to a platform piled with tropical fruit. The crowd is warned that if the orangutans attack, everyone must run.

It seems alarmist until “Richie”, the alpha male, struts in from behind the trees. As YouTube documents, he is huge and commands the respect of all of the primates present, including the humans. We carried the cage into the forest, along one of the orangutan tracks. We didn’t dare go too far, knowing orangutans occasionally attack humans. We put the cage on the ground and opened the latch. The larger of the two looked up at us through the mesh, as if to ask, “what — can we leave?”. Slowly it moved through the opening and arced its way across the path towards a thin tree. The second only followed when the first one had made it.

Cautiously it looked back at us like it couldn’t believe we were really letting it go. It made it to another tree close by and climbed, every step a deliberate act. Five metres up, the branches on their respective trees joined, allowing the second slow loris to meet the first. They embraced before looking down one last time and climbing into the canopy, where we couldn’t see them again.

It is satisfying to think of the slow lorises as free. But of course we are aware they are emblematic of Borneo, which has lost so much forest and where hunting is consequently much less sustainable and species-loss in seemingly inevitable. We were also aware that the villager wanted his cage back.

Disneynature’s Earth: one tree planted for every bum on the seat

Arrests as Tasmania’s old growth forest heads to the chainsaw 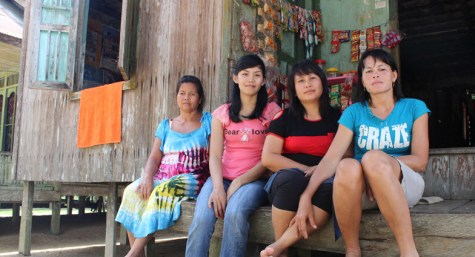 Some might say you were crazy or irresponsible to get involved.
I say, “Job well done”.

What a good article and what a good outcome (although the alleged fate of possums moved to new territor – so they will be in someone else’s roof space next time – serves as a warning. Mind you I would expect even a displaced Brushie to put up quite a battle against his unwelcoming cousins).

Eleven years ago I shared the experience on an Amazon tributary of buying a large turtle from villagers so we could release it a few kilometres up or down river. I daresay he didn’t end up as turtle soup but has been recycled throught tourists’ concern for the decade since.

There are a lot of horror stories about mis-treatment of animals around the world. However, we seem to be the worse offenders. Did anyone know for example, feral cats alone in Australia kill 75 million native animals EVERY day/night. How can this go on?

A quick lesson in geography – this story was set in Malaysia, not Indonesia as the headline indicates. (The line “The law in the Malaysian state of Sarawak” seems a bit of a clue.)

Borneo is split between three countries – Malaysia, Brunei and Indonesia (who usually refer to it as Kalimantan rather than Borneo). Culturally they are similar in some ways, and much of the wildlife is the same, but borders are borders.

Congratulations, you just potentially introduced pathogens into a protected environment which (if present) will kill a lot more than just the two animals you “liberated”. Transportation of animals from one environment to another, even if the distance is not great, should only be done by qualified scientists and only with great care.

How do you know that the animals you released (illicitly, without permission, in a NATIONAL PARK of all places) don’t have a disease? Did you get a qualified veterinarian to check them over? Did you put them through a reasonable quarantine check? For that matter, did you even ask a loris expert how the introduced creatures and the local populations will interact with each other? Are you 100% certain the slow loris’ are not territorial, and will not fight?

I find it spectacularly ignorant and disappointing that two journalists from Australia of all places would do such a rash thing, considering all the harm that has been done to native Australian wildlife by animal relocation and introduction. Shame on you. Next time you are tempted to meddle where you are unqualified, make a donation to an animal welfare charity that will be able to do it properly.