No room at the inn for Aboriginal customers in Borroloola

Many Aboriginal people support booze bans in local communities. But a raid on Chrisco hampers in the Northern Territory left a bad taste. Sean Kerins of ANU's Centre for Aboriginal Economic Policy reports from Borroloola. 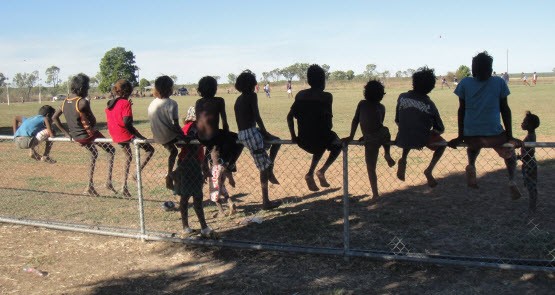 Local kids from the Borroloola community in the Northern Territory

“The role of ‘punishing the blacks’ was usually done by the police,” says historian Tony Roberts in his gruelling Blackheath History lecture of 2009. He was talking about policing the frontier of the south-west Gulf of Carpentaria in the late 19th century. He could have been talking about today, in Borroloola, the main township in the south-west Gulf. They’re still punishing.

Borroloola sits on the banks of the McArthur River about 1000 kilometres south-east of Darwin. It’s isolated, population 2400, with a violent colonial history. About 90% of the population is Aboriginal, predominantly of Garawa, Gudanji, Mara, Waanyi and Yanyuwa peoples. Borroloola is an open town where most of the small white population live in the subdivision behind the school, on higher ground and in superior housing. On the edges of the township are the “camps” of the Aboriginal groups. All the businesses except one are managed by the white population.

The town is sweltering. It was still 35 degrees at 7pm when I arrived on December 10. Like most Australians, the people are looking forward to the Christmas break. Many families have been putting away a bit of money each week on Chrisco Christmas hampers.

“Chrisco: Helping everyone save for a magical Christmas!” the company’s website proclaims. There are different hampers on offer, targeted to various tastes and budgets.

Several family-oriented hampers don’t have alcohol listed in their contents, but the website shows a bottle of sparkling wine. If it’s alcohol that you want for Christmas, Chrisco will also do a variety of hampers from Bundaberg, Jack Daniels, mixed spirits or the Happy Hour Mix, all of which can be paid off over 52 weeks, making them accessible to people on low incomes. There is a small warning down at the bottom of the website on the Liquor Act 2007 and the Liquor Control Reform Act 1998, but there’s nothing about the laws imposed through Northern Territory Emergency Intervention (NTER), or what’s now politely called Stronger Futures, and the dangers of taking grog into what have been defined, until recently, as “prescribed areas”.

Perhaps, given what unfolded in Borroloola when Chrisco’s hampers arrived two week before Christmas, there should be.

As people headed to the Pandion Haulage depot in Borroloola, where the hampers had been delivered, police were “tipped off” that some hampers contained alcohol. It’s not illegal to bring alcohol into the open town of Borroloola, but it is illegal to take it into the “prescribed areas” — the Aboriginal camps. The police — in their designation as community police officers — could have informed Aboriginal people at the Pandion depot that they couldn’t take any hamper containing grog back to their homes, but instead reinforcements were called in from Katherine 670 kilometres away. Police then conducted, as described on the NT police Facebook page, a “detection and seizure operation” that resulted in the seizure of “18 bottles of assorted spirits and 106 assorted spirits cans, and three vehicles”.

Yes, you can lose your vehicle for transporting alcohol into prescribed areas, regardless of whether you were doing so intentionally or — as happened to at least one unfortunate vehicle owner — were merely giving a lift to someone who couldn’t carry their Christmas hamper.

“This type of activity has the look of entrapment. It reeks of punishment. Aboriginal people see it as deeply unfair.”

This type of activity has the look of entrapment. It reeks of punishment. Aboriginal people see it as deeply unfair.

On December 11, in response to the heavy-handed police tactics, and in the middle of a significant initiation ceremony, Garawa, Gudanji, Mara, Waanyi and Yanyuwa leaders and community members met with the police. It was a hot day and a hot meeting. Senior Aboriginal people were dismayed that they hadn’t been spoken to about the problem that was about to unfold.

They were particularly aggrieved because they have been trying for years to manage alcohol — especially the management practices of the local pub, operating at one time under the licence “Cash Cow” — while getting little support from government agencies.

What was most offensive to Aboriginal leaders was that both the NT and the Commonwealth governments are currently trying to draft an Alcohol Management Plan, and are apparently seeking the involvement of the Aboriginal community — some cynically say so the community consultation box can be ticked. Getting representative Aboriginal input is proving difficult.

Aboriginal leaders say there’s no point developing a plan that has no involvement from the people who drink. They also say the heavy-handed tactics are pushing grog consumption to the fringes of the township. It sends young men and women to their deaths as they drive outback roads dotted with wallabies and stock to the nearest roadhouse where they can buy the hot stuff. The carnage from these trips is leaving deep scars.

In response to the meeting, the police didn’t invite senior Aboriginal representatives to sit down with them and work things out. Instead, they erected a road-block outside one of the Aboriginal camps; the place where the most articulate and vocal critics of top-down policing live. One community leader, on his way to an initiation ceremony with old men, was punished for not carrying his drivers’ licence.

Who is accountable for this debacle? Perhaps it’s the Aboriginal drinkers, on the lookout for grog to feed that constant desire, to numb the pain of existence. But we know that Borroloola has no dry-out place, no counselling services. Money pours into the local medical centre to deal predominantly with the after-effects of grog abuse.

Perhaps it’s the wider Aboriginal community, tired of trying to make themselves heard in the whirlwind of top-down government programs to improve their lives. Perhaps it’s Chrisco. Maybe they need to develop polices about sending alcohol to remote areas where Aboriginal populations live in areas prescribed as alcohol-free. Perhaps the family-owned and operated Pandion could have contacted senior Aboriginal people and raised the issue that they were delivering grog that in all likelihood would end up in the prescribed areas.

Community policing is about identifying and solving community problems together. The police are not the sole guardians of law and order; all members of the community become active collaborators in the effort to enhance the safety of “their community”. Community policing can have far-reaching implications, bringing about change, improving people’s circumstances and saving taxpayers’ funds.

The essential ingredient of community policing is community members actively participating in the process of problem-solving. This is not always easy to achieve as it requires profound changes within the police organisation and culture, and this is where NT authorities need to reflect and change their practices so that they don’t slip back into the old role of “punishing the blacks”.

No matter how much things change, they still stay the same.

Maybe it would be more effective if everyone in the town was subject to the same anti-alcohol laws.

Some effort to overcome the isolation might help.
What if the sister city arrngement that exists between Australian Towns and those overseas was to become the basis for a sister school arrangment between the children of remote communities and those in suburbia.
It is bound to enhance education and as a side benefit any heavy-handedness on the part of “Authority” would never, ever escape detection and denouncement.
The NBN will enhance such fraternal connections between Australians, (is this why the conservatives wish to demolish the NBN?).

But getting back to your beaut idea should it included an exchange of policemen?

Perhaps the saddest piece I’ve read all week. (And there were plenty of tragic contenders.)
Maybe one day, the people with the power and the money, will have the decency to consult with those who they’re supposedly, trying to empower.
But I’m not holding my breath.
Merry Xmas indeed. 🙁