2012 Crikeys: the good, the arsehat and the sexy

The results for our annual Crikey Readers Choice Awards are in for the Person of the Year, the Arsehat of the Year and our country's sexiest politicians.

The people — well, you lot — have spoken. The results of Crikey‘s annual Readers Choice Awards are in and we reckon the Person of the Year and the Arsehat of the Year winners are particularly deserving this year. No comment about the sexy pollies …

Crikey‘s Person of the Year

Last year no one had heard of her. This year, you might not immediately recognise her name, but you’d absolutely know who she is and what she’s done. And even sadder — you’d know what was done to her.

On October 9, 15-year-old Pakistani schoolgirl Malala Yousafzai was returning home on the school bus when a Taliban gunman boarded, asked for her by name and attempted to shoot her in the head. A finalist in the International Children’s Peace Prize and a 2011 winner of a Pakistan peace prize, Yousafzai was well-known across Pakistan for her support of girls’ education. She wrote a blog for the BBC called “Diary of a Pakistan schoolgirl“.

Yousafzai is now recovering from the Taliban attack in Britain. She was runner-up for Time‘s Person of the Year (behind Barack Obama). Here, Obama plays second fiddle to a 15-year-old schoolgirl and we think he wouldn’t mind at all. 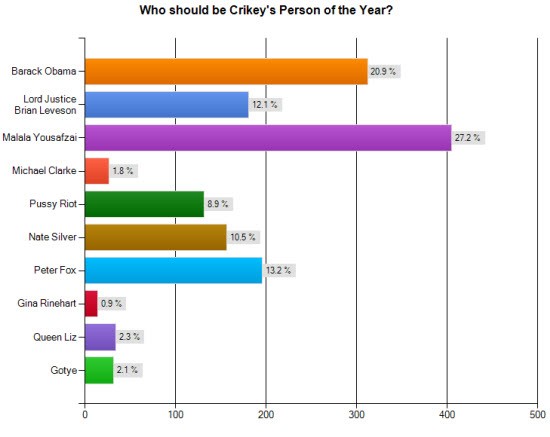 Crikey‘s Arsehat of the Year

Thanks to chaff bags, “destroying the joint” and dying of shame, it’s no surprise Alan Jones dominated this year’s Arsehat award with a whooping 45% of the vote.

But it was his actions in September — when Jones told a Sydney University Liberal Club function that Gillard’s recently deceased father had “died of shame” — that sealed his Arsehat crown. As much as we hope his influence will soon wane, the latest ratings survey has his listeners on the increase. 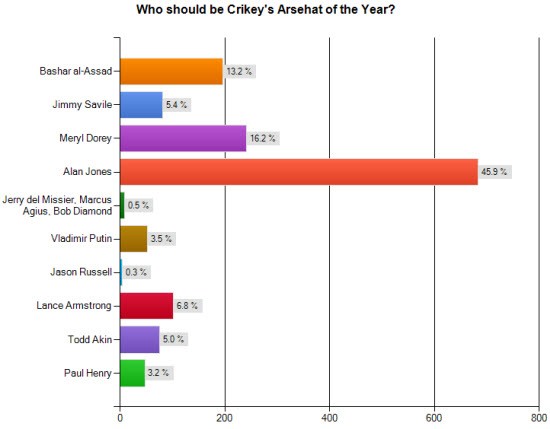 And we’ve had several complaints that George Pell wasn’t an Arsehat finalist. There’s a few good reason for this: we forgot about him. We crown him with an honorary Arsehat, which we assume he will continue to earn throughout 2013. Fingers crossed for the 2013 title.

And now to the most controversial Crikey reader picks …

Another year, another sexy pollie title for Turnbull and Ellis — third year running for these two. Will their sex appeal ever wane? Still, Ellis only won by seven points, so we’re predicting 2013 will be the year of Wong.

In breaking news, 74 people voted Christopher Pyne as our sexiest female politician. We’re not sure what that means.

Two stand out joys from this year’s awards.

You forgot to put George Pell in the Arsehat comp and were brave enough to admit it. (Bless you)

Drat, I squandered a valuable vote on Larissa Waters when it should’ve gone to C Pyne.

There’s no way the mistake will be repeated next year.

Can we repeat this, now with preference flows?

I was one of those who voted for Pyne as sexiest female, and I feel good about it.

I also voted for Leveson as Person of the year, and feel good about that as well, even though the actual winner was deserving of the award.

At least I got it right in the Arsehat category. No contest really.

Malcolm Turnbull sexy? In what universe? Honestly, he’s about as sexy as two week old porridge. I suspect strong input from Malcolm’s eager-to-remain-employed staff in the voting.