Victims' calls being taped and monitored? ... why tourism chief is quitting ... help us name these journos from 1975 ...

Big Brother is listening in? A tipster warned that the Victims Support Agency in Victoria, which is part of the Department of Justice, “has been illegally taping victim’s conversations without their consent and then using this information. An internal review has been conducted but nothing has been released to the public. It is extraordinary that the DOJ has acted in such an illegal fashion and has not made this internal review public and there have been no consequences.”

After chasing this Tip around various bits of the state government, we elicited this from a spokesman for the Department of Justice:

“This is incorrect. VSA introduced call monitoring to the Helpline in response to a recommendation from the Auditor-General. A recorded message at the start of the call alerted callers to the monitoring for quality and training purposes as is standard in call centre environments. Recordings were securely stored for a short period of time and only accessed by authorised staff. This process — which complied with relevant privacy laws — was trialled for four weeks and concluded at the end of August this year. The department now uses a manual call coaching system.”

Sudden departure. Interesting news that John Lee, chief executive of the Tourism and Transport Forum, is leaving. A tipster had some questions about the move:

“TTF is Australia’s peak industry body, covering the big end of town when it comes to ships, aeroplanes, airports and the like. Memberships are limited and exclusive, making the TTF arguably the most expensive not-for-profit in Australia. It might not make a profit, but boy does it make a surplus.

Which makes Lee’s sudden departure and the strategic silly-season timing of it all the more curious. Lee had made a good fist of the challenging role, but there are certain built-in tensions that make the role challenging. For example, how do you have mortal foes such as monopolist airports and cost-cutting airlines in the same (Bedouin) tent? Pushed, jumped?”

We called Lee, who finishes up at TTF in February and is moving to the Australasian Casino Association. He said “I have loved the job, but it is a very demanding role”. He said he had welcomed the opportunity to take up a new role when he was approached by the casino czars. Lee denied there was serious frustration or tension within the TTF, saying the only source of frustration for him was the federal government’s lack of support for the tourism sector. When asked about possible conflicts of interest between members, Lee said the TTF did not become involved in commercial arrangements between members. “It’s not our job,” he told Crikey.

Crikey’s Christmas reading list. Tips is concerned about Tony Abbott’s reading habits. We know he didn’t read the recent damning Federal Court judgment on the Ashby / Slipper case, which touched on his friend Mal Brough’s role in the case. We know he didn’t read the BHP statement on shelving a major mine expansion (although that didn’t stop him blaming it on the carbon tax etc). So what did Abbott read this year? You got it, Fifty Shades of Grey … Tips has a theory that Abbott has written more books than he’s read.

Tips has kindly decided to help Abbott by providing a Christmas reading list for him, but we need your help. Email us your suggestions and we’ll collate a list for Monday.

Scrooge strikes at Qld Health … A mole says times have been tough at a Queensland health service:

“Monday’s message from a senior executive announcing an immediate freeze on all recruitment processes accompanied by a clampdown on payments for those acting up to higher duties and continuation of any temporary contracts came as a nasty shock to most concerned. But imagine the even bigger surprise when the following day all staff received an emailed invitation to a function to mark the impending departure of the same senior executive to a better post in the UK — but only for an admission price of ‘$30 to cover finger food’ and an agreement to cover the cost of ones own ‘beverages’. Merry Christmas.”

… while Xmas may be merry at Ten. We received a highly suspect tip about a Christmas gift of condoms for staff at Network Ten’s Melbourne office. The network told us there was no Christmas hamper for Network Ten staff, and said they don’t discuss their internal affairs publicly. Drop us a line and solve the mystery.

Out with a bang! A TV type is curious about the choice of music to go with the glossy Nine Network ad promoting its upcoming shows: “Am I the only one who finds it a little strange  the most repeated phrase in the Channel Nine station promo for 2013  is ‘we’re going out with a bang’? Is this a reaction to the Mayan calendar situation or perhaps the promo department issuing advice to the ASX?”

A bygone era of news mags. A blast from the past, via a Crikey reader. This is a staff photo of the National Review in 1975 — then Australia’s biggest-selling news magazine (bigger than The Bulletin): 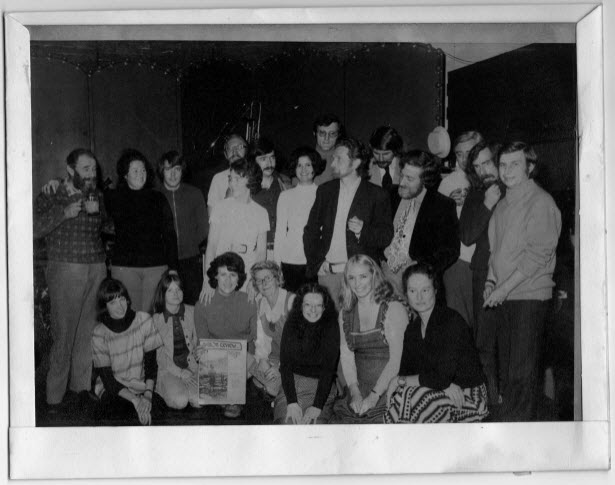 Our reader recognises Richard Walsh and Anna Stewart — “it still reminds me what a loss she was to Australian journalism” — but you might know of some more … drop us a line to add some names to the pic.

Brown and the Tourism Task Force

The publication is Nation Review (not National). It began life as the Sunday Review, financed by Gordon Barton, who came to an active role in Australian politics by opposing the Vietnam War and establishing and bankrolling the Liberal Reform Movement for the 1966 election. This progressively morphed into the Australia Party which ultimately folded into the Democrats.
The Review (weekly) merged with the Nation (fortnightly) to become Nation Review.
I’m pretty confident that the bearded gent at extreme left of the photograph is Mungo McCallum, but although I would also have recognised Richard Walsh, I can’t put a name to any-one else. Michael Leunig is possibly the bloke, centre back (dark hair and moustache. He was definitely cartooning for NR at that time.