Current efforts to restrain emissions are nowhere near the scale required to address climate change. Scientist Andrew Glikson calls for a planetary defence effort -- on the scale spent on the military.

These are some of the options being seriously considered in efforts to restrain human-induced climate change.

An understanding of the scientific knowledge indicates that attempts at returning the climate to anywhere near its original condition will require an effective planetary defence effort on the scale spent on the military — which has totalled more than $20 trillion since World War II.

This kind of action is not presently occurring. Atmospheric carbon dioxide is triggering amplifying feedbacks, and therefore efforts at reduction in atmospheric CO2 emissions are no longer sufficient to prevent further global warming. Efforts need to be undertaken in an attempt to reduce atmospheric CO2 levels from their current level of near 400 parts per million (ppm) to well below 350 ppm.

The scale and rate of modern climate change have been greatly underestimated. The release of a total of over 560 billion tonnes of carbon through emissions from  industrial and transport sources, land clearing and fires, has raised CO2 levels from about 280 ppm in pre-industrial periods to 397-400 ppm, reaching a current CO2 growth rate of about 2 ppm per year.

The current CO2 level generates amplifying feedbacks, including the reduced capacity of warming water to absorb CO2 from the atmosphere, released from fires, droughts, loss of vegetation cover, disintegration of methane released from bogs, permafrost and methane-bearing ice particles and methane-water molecules.

With CO2 atmospheric residence times in the order of hundreds to tens of thousands of years, protracted reduction in emissions, either flowing from human decision or due to reduced economic activity in an environmentally stressed world, may no longer be sufficient to arrest the feedbacks.

Four of the large mass extinction of species events in the history of Earth have been associated with rapid perturbations of the carbon, oxygen and sulphur cycles, on which the biosphere depends, at rates to which species could not adapt.

Since the 18th century, and in particular since about 1975, the Earth system has been shifting away from Holocene (from approximately 10,000 years ago) conditions, which allowed agriculture, previously hindered by instabilities in the climate and by extreme weather events. The shift is most clearly manifested by the loss of polar ice. Sea level rises have been accelerating, with a total of more than 20cm since 1880 and about 6cm since 1990.

For temperature rise of 2.3 degrees, to which the climate is committed if sulphur aerosol emission discontinues, sea levels would reach Pliocene-like levels of 25 metres plus or minus 12 metres, with lag effects due to ice sheet inertia.

With global atmospheric CO2 equivalent (a value which includes the effect of methane) above 470 ppm, just under the upper stability limit of the Antarctic ice sheet, with current rate of CO2 emissions from fossil fuel combustion, cement production, land clearing and fires of about 9.7 billion tonnes of carbon in 2010, global civilisation faces the following alternatives:

As indicated in Table 1, the use of short-term solar radiation shields such as sulphur aerosols cannot be regarded as more than a band aid, with severe deleterious consequences in terms of ocean acidification and retardation of the monsoon and of precipitation over large parts of the Earth. By contrast, retardation of solar radiation through space sunshade technology, may allow time for CO2 draw-down. Unlike sulphur dioxide injections this will not have ocean acidification effects — an effort requiring a planetary defence project by NASA.

By contrast to these methods, CO2 sequestration through fast track reforestation, soil carbon, biochar and possible chemical methods such as “sodium trees” may be effective, provided these are applied on a global scale. 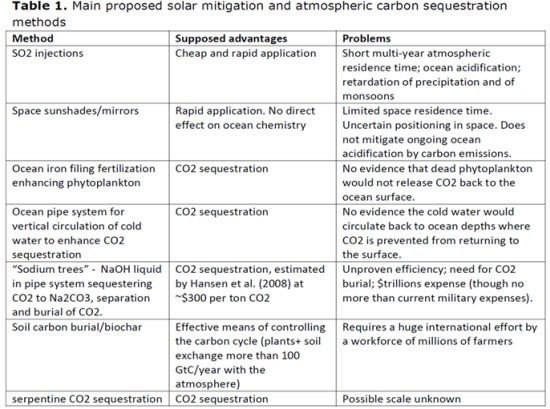 It is likely that a species which decoded the basic laws of nature, split the atom, placed a man on the moon and ventured into outer space should also be able to develop the methodology for fast sequestration of atmospheric CO2. The alternative, in terms of global heating, sea level rise, extreme weather events, and the destruction of the world’s food sources is unthinkable.

*Andrew Glikson is honorary professor in earth and paleoclimate science at the University of Queensland, and visiting fellow at the Australian National University

Global warming over 1000 years: why Flannery is correct

You forgot the most effective measure of all, KILL Rupert Murdoch & limited news.

It is nonsense to dream of extracting waste carbon out of the atmosphere, when our clear responsibility is not to have emitted it in the first place.

Roger, who washes the dishes at your place?

i can’t believe people are thinking of pumping sulphur into the atmosphere. “severe deleterious consequences” – um yeah, ya think? that’s how acid rain is born.

and these sun shades reminds me of mr burns trying to block out the sun over springfield. at least that one’s comical.

hey here’s an idea, how ’bout stopping burning fossil fuels and pumping co2 into the atmosphere? oh apparently that’s in the too hard basket, so lets just pump the atmosphere full of sulphur dioxide instead. yeah sounds smart.

Hugh McColl, are you saying that we must dirty our dishes in order to eat and thus must clean up after ourselves?

One difference to your metaphor is that we don’t need to emit carbon to get energy. To be sure, we need a emergency-type effort to create massive energy storage technology. Already, we should be mass producing (N-word) power stations, for the entire world.

The other difference is that the means to clean away our waste gases are hopelessly inadequate. Consider that every year, 40 gigatons, that’s twenty thousand cubic kilometres, of CO2 should be permanently buried in some place where carbon would not otherwise appear. It can’t be done. Toying with these silly schemes offers us an illusion of innocence, but will not fool any jury of survivors.