Obama weighs up letting the budget go over the cliff

The "fiscal cliff" is dominating political news in the United States, where come January 1, tax rises and spending cuts will kick in under the current deal, unless Obama and the House can negotiate a better one. 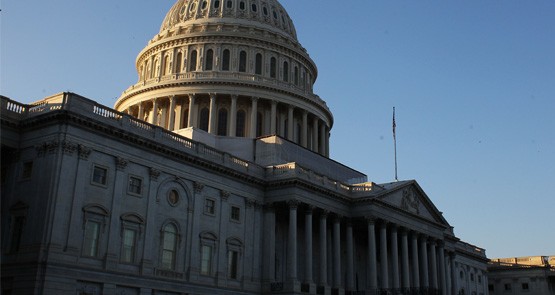 With Christmas bearing down on Americans — they call it “the holidays”, Let It Snow and All I want for Frikkin Christmas are being drummed manically through every free audial space — there’s something else on the way too.

The “fiscal cliff”, a series of spending cuts and tax rises which kick in automatically on January 1 if a better, more comprehensive deal on deficit reduction is not instituted by Congress and signed into law by the President. The issue has obsessed the American public since the end of the election and it took an event like the Newtown school massacre to take it off the front page. The deficit is currently standing at about $1.17 trillion; the “fiscal cliff” legislation, if triggered, would reduce that to $660 billion. The public debt they’re trying to chip away at is currently at $11.3 trillion, give or take.

Now there are signs that a deal may be at hand, after weeks of negotiation between the White House and the Republican leadership in the House, headed by speaker John Boehner. Deficit reduction would be achieved by levying tax increases on those earning over $400,000 a year (a notch above the $250,000 the Democrats wanted as a threshold), letting some payroll tax (the US equivalent of PAYG) reductions lapse and lowering increases in social security, below the inflation threshold. There would also be $100 billion cuts in military spending.

House Democrat minority leader Nancy Pelosi has already said she will throw her support behind the proposal. Whether she can guarantee Democrat votes for tax increases on middle income earners, while giving the third percentile of high income earners — between $250,000 and $400,000 — a tax break remains to be seen. Boehner will have problems rallying “his” troops round any sort of deal involving tax increases at all.

Repeated attempts to make a deal prior to the election foundered on the insistence of the Republicans that there be no new tax rises, while the Democrats would not concede the spending cuts required by the GOP. The match-up was hardly equal. The White House was prepared to give away hundreds of billions in spending cuts — to the howls of supporters on the Left — while the GOP was in thrall to the Tea Party and unwilling to concede $1 of tax increases, offering instead only “revenue raising” from closing loopholes.

But that was before the election and Obama’s triumph. Latest counting shows that he won by more than 5 million votes, 51% to 47%, an ironic result indeed for Mitt Romney. Obama re-affirmed that he would not sign a bill that included no tax increases on the wealthy and invited the GOP to let the “fiscal cliff” bill go into effect. Though the bill contained some harsh cuts to a whole series of social programs, there were also advantages for a Left program — the Bush-era tax cuts for those earning more than $250,000 a year would not be extended, and 50% of the cuts would come from the military.

“The prospect of an all-tax raise deficit reduction never really existed; it would be an impossible look for the Democrats to become the party of tax-only reductions.”

The election result made it clear to Boehner that he would have to concede — even though he made some fairly half-hearted assertions that the House too had a “mandate” (even though the Democrats won a majority of the House vote, the GOP retaining a majority only through gerrymandering). Sadly for Boehner, no one told the Tea Party that they had lost — nor informed Grover Norquist, the muppetish lobbyist who had persuaded the entire Republican congressional delegation for several years to sign a pledge that they would never raise taxes. The pledge had held through the neocon years, but within days of the election it was beginning to crumble, with conservative Saxby Chambliss and “moderate” Lindsey Graham, being the first of several GOP senators and representatives to say that they would opt out of the pledge.

From the Left, Obama has been under pressure to hold the line on a deal that would see all deficit reduction come from tax and revenue increases, military spending cuts and none from social services cuts. Such arguments have come as much from mainstream Left liberals such as Paul Krugman, as well as the further Left at Huffington Post, Counterpunch etc. Krugman argues that not only have there already been de facto social spending cuts over successive previous budgets, but that the proposed reduction of the deficit would reduce demand and stall the barely functioning recovery.

Should Obama take the deal? In terms of protecting the poor, there are areas where it represents an advantage — it extends unemployment benefits. It also includes another $50 billion in infrastructure funding. But rejecting the deal — and the cuts it entails — and going over the cliff would kick in tax increases from $250,000 a year.

It might also provide some political theatre for Obama; research indicates that the public will blame the House for any such event — and the recession such a crude and untargeted spending reduction would prompt — as they did the GOP for the government shutdown in 1996. It is this prospect that has kept Boehner at the table, but one that the Tea Party caucus are relatively indifferent to; they’re playing a longer game and they’d be happy for a little more chaos.

The prospect of an all-tax raise deficit reduction never really existed; it would be an impossible look for the Democrats to become the party of tax-only reductions. The basic, illusory, idea that a national budget is the same as a family budget persists even among hardcore Democrats. So the melancholy prospect for Obama is either to let the budget go over the cliff — triggering spending cuts — or take the deal that’s being offered — triggering spending cuts. As Paul Krugman noted: “[will] the Republican crazies scuttle the whole thing before it even gets off the ground. If they don’t, there will be some serious agonising for progressives, yours truly included”.

Thus after a marathon of bickering, no one’s going to get anything they want. It’s beginning to look a lot like Christmas …

Thanks for another interesting year of insights and insults, GR.
That last line could be your best of the year.
“Happy Holidays”
Matt.

The last two lines are on the mark.

A sugary carols overdose can be very uncomfortable but always clears up before the new year. Or, as our US cousins are wont to say, ‘new years’.

The comment regarding the Tea Party is spot on – they are “bomb-throwers”, with very little interest in the way things are, currently. It doesn’t match their version of reality.
.