Who deserves the title of best CEO? Which business has had the best comeback this year? Which was the business world's biggest failure? The 2012 Crikeys continue ... 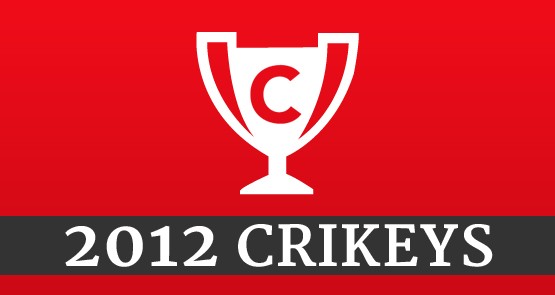 It’s been a year of contrasts for the Australian business community. While GDP growth rattles along at a world-beating clip, business confidence is in the toilet. While the talk of the mining boom weighs heavily on the minds of investors, the ASX will finish the year up more than 12%.

The best thing to come from such a year is that there has been no shortage of great stories to cheer and jeer. With that, let’s hand out some awards. The 2012 Business Crikeys go to …

While there has been plenty of doom and gloom around the market in 2012, there is actually a surprisingly strong field of candidates for the best ASX performer award.

The runner up is Super Retail Group, which owns the Super Cheap Auto, BCF and Rebel Sports chains, and its chief executive Peter Birtles. He deserves plaudits for defying poor retail conditions and turning around the fortunes of Rebel, a company he was heavily criticised for buying last year. SRG’s shares are up 80% since the start of the year.

But the award goes to Ainsworth Game Technology, the gaming machine maker founded by 89-year-old entrepreneur Len Ainsworth. The gaming machine maker has struggled for years to crack the North American market, but Ainsworth’s perseverance has been rewarded with a firm foothold and strong profits. The stock is up a remarkable 400% since the start of the year. That means the value of Ainsworth’s shareholding in the company — now up to $443 million — is greater than the value of the other pokie maker he created, Aristocrat Leisure.

Never-ending concerns about the global sharemarket hit the mining sector hard in 2012, but the runner-up for the worst performer on the ASX was blind-sided by another global force — the Indonesian government. Intrepid Mines, which has seen its shares fall 77% since the start of the year, has been struggling since Indonesia’s government stripped the company of its rights over a gold mine.

But the award must go to surfwear giant Billabong, which has seen its price fall 60% since March in a series of calamities. In February, private equity firm TPG offered $3.30 for the group, but major shareholder and director Gordon Merchant knocked that back and said he wanted $4. Within four months, Billabong’s position had deteriorated to the point it had to sack its CEO, raise $225 million and totally restructure its operations. The shares fell to 96c, underlining Merchant’s complete and utter lack of feel for what the market thought the group was worth.

TPG eventually lobbed another bid of $1.45 a share, which it then abandoned. Another private equity firm, Bain Capital, made a takeover bid and abandoned this after a matter of weeks. A Billabong executive, Paul Naude, then made a bid. CEO Launa Inman has been left with a basket case that will be extraordinarily difficult to turn around.

Nine Entertainment boss David Gyngell takes the runner-up spot for snatching victory from the jaws of defeat by getting Nine’s hedge fund creditors to agree to swap their debt for equity and keep the company out of receivership. It went down to the wire, but Gyngell held his nerve and got the deal done.

But to find the winner we’ve gone a little off the beaten track to Breville Group, the company behind iconic electronics brands Breville, Kambrook and Philips. A month-and-a-half after previous CEO Stephen Audsley resigned in September 2011, Jack Lord was appointed acting chief executive. The former Sunbeam executive had a great first year, with the company defying poor retail conditions in Australia and North America to post a 45% rise in net profit to $46 million. The result was largely driven by huge growth in North America, where Breville’s brand Keurig has been a hit. Lord was made permanent CEO in August; Breville’s shares are up more than 150% this year.

James Warburton from Ten Network stands out here. While he’s arguably had a lot of help — particularly from predecessor Lachlan Murdoch — Warburton has overseen falling ratings, plunging profitability and a sinking share price, down from 65c at the start of the year to 25c at the end.

Warburton’s biggest blunder was unquestionably the $230 million capital raising Ten was forced to undertake in December — less than six months after Warburton had assured investors another capital raising would not be required. In a market that hates surprises, Warburton’s was a shocker.

The Australian Shareholders Association, which added Crikey founder Stephen Mayne to its staff during a busy annual general meetings season, continues to raise its profile and influence. It and other activist investors have been aided by the “two strikes” rule on executive pay, which has handed dissenters a tool to whack boards over any issue — and breathed new life into the AGM format.

But the winner of this category is none other than James Packer, who this year has emerged as an extraordinary market and media campaigner. First he took on Sydney casino operator Echo Entertainment, ousting chairman John Storey after an unrelenting and often personal attack. Then he turned his attention to the NSW government, charming and cajoling politicians and the press to grant his group Crown Limited a second Sydney casino licence at Barangaroo. Along the way he regularly appeared in newspapers clad only in Speedos, gave interviews to 60 Minutes and remarkably became a regular commentator in The Australian Financial Review.

Comeback of the year: Virgin Australia

Every year things seem to get tougher for the aviation sector — just ask Qantas chief Alan Joyce. But the sector can also claim one of the more impressive corporate renaissances of recent years in Virgin Australia.

Under former Qantas executive John Borghetti, the airline has changed its image from cheap, cheerful and cheeky to sleek and corporate. Business class has been added, staff retrained, branding and livery have been transformed, all with the aim of winning Australia’s most valuable airline customers from Qantas — high-yielding, frequently-flying business travellers.

Borghetti has boosted the size of Virgin’s fleet, increased staff numbers and grown capacity. He’s also pulled off a few key corporate moves, including the acquisition of Tiger Airways and bringing Singapore Airlines on as a strategic shareholder. Borghetti is halfway through a five-year plan, but if the market is any guide, investors like the way this story is going; in 2012, Virgin’s share price is up an impressive 52% to around 43c.

Fall of the year: Nathan Tinkler

It seems strange to think that the year actually started pretty well for Nathan Tinkler, with Whitehaven Coal buying his coal outfit Aston Resources and agreeing to pay top dollar for a privately-held coal company called Boardwalk Resources that he threw into the deal. Tinkler emerged from that deal with a fortune of around $1 billion and was seemingly sitting pretty. It didn’t last long.

The rot started in July, when Tinkler launched a $5.3 billion takeover bid for Whitehaven, which needed the broad support of existing investors to get over the line. The investors refused to back Tinkler, the deal failed in August and it has been all downhill since.

With his only real wealth tied up in his parcel of Whitehaven shares, Tinkler has struggled through a series of cashflow crises, including problems at his sporting clubs, his horse racing empire, his property development business and his investment arm. Most recently, they’ve taken his jet and helicopter. Tinkler still has a $650 million stake in Whitehaven, but the question is what debt he owes against it. Most pundits suggest he owes more than the stake is worth. Whatever the case, Tinkler won’t be seen on a rich list for years to come.

Around this time last year, iconic retail chain Dick Smith Electronics was sitting on the balance sheet of grocery giant Woolworths with a value of $440 million against its name. In September, Woolies sold the business for just $20 million to private equity firm Anchorage Capital.

The price — and the $420 million loss Woolworths has absorbed on the business — speaks volumes about the state of the retail sector in general and electronics retailing specifically. Basically, Woolies was willing to give the business away to get it off its books.

But for all that, Anchorage Capital seems pretty confident it can turn things around. A lot of the hard work of store closures has been done and former Myer executive Nick Abood and Bill Wavish know plenty about turnarounds. Surely making that $20 million price look like a bargain won’t be too hard? Don’t bet on anything in the retail sector.

Story of the year: Gina Rinehart and Fairfax Media

The battle between Gina Rinehart and the board of Fairfax Media was a neat encapsulation of many of the big themes that were played out in the Australian business community in 2012.

On one side was a woman who perhaps best represents the incredible wealth created by the mining boom, a fact underlined when BRW magazine named her the richest woman in the world and Treasurer Wayne Swan slammed her influence. In the other corner was a company being battered by the perfect storm of falling consumer and business confidence and ravaging structural change.

2012 Crikeys: the good, the arsehat and the sexy

2012 Crikeys: pick our person (and arsehat!) of the year, plus hot pollies